A Weekend of Epic Destruction in EVE Online

The Battle of Asakai, Poinen Must Burn and more…

I’m CCP Manifest, the Public Relations and Social Media Fleet Commander for EVE Online. I work closely with both development and the community team on messaging, gathering feedback and helping to magnify the accomplishments, dreams and actions of the EVE playerbase to the lamer places in life outside the boundaries of its virtual universe. Often I get a front row seat to player events as they are happening thanks to communication with the CSM, podcasters, bloggers and #tweetfleet members, so I’m here to talk a little bit about this past weekend and try to help put it in some sort of context.

If you follow EVE closely, like we do, it would have been pretty difficult to miss news of the Battle of Asakai that happened this weekend when one unfortunate Titan pilot misclicked and sent his massive, gorgeous and expensive spaceship cascading into an interesting situation in a tactical position he hadn’t planned on. He’d planned on being with his fleet interrupting a small skirmish between two much smaller groups. Soon he was essentially Forever Alone in a low-security solar system… well, actually he wasn’t alone for very long, and the ship… well. 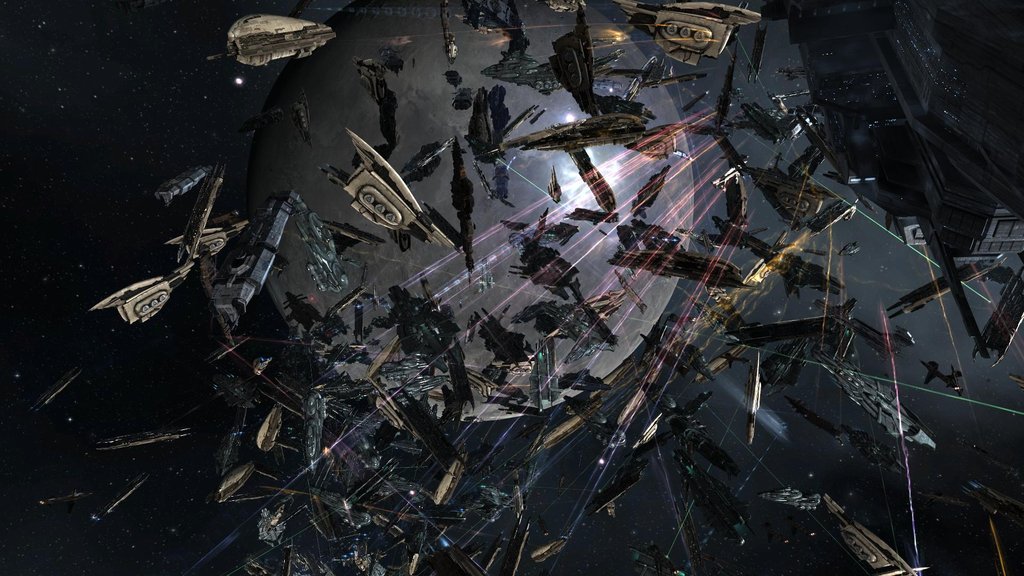 Since you may just be starting out in the EVE Universe or a DUST 514 merc here trying to figure out what’s going on overhead or simply EVE curious but not yet heavily involved in EVE’s mega-meta-game and internet conversations, I’m going to try to take it a bit slow.

Expert EVE ubervets should already know where to go to get the real gritty details, as it was all over Reddit, Twitter and various gaming and non-gaming media sites around the world—most of which funneled their original source material from TheMittani.com and Reddit, but some of which came thanks to tips, recaps, comments, blog posts and videos by awesome pilots amongst you. Special thanks to those folks and to everyone who joined in conversations and hotdropped their own comments and thoughts about EVE and living inside it.

If you want to dive a bit deeper than this blog covers, I’d humbly suggest the pretty amazing write-ups of the battle and its lead in thus far in the “Breaking: Massive Super Fight” and particularly “Asakai Aftermath” articles on TheMittani.com, and scouring Reddit and some other write-ups on gaming sites, some of which have been curated with original source material from in game and out of game communication.

As a quick side note, this wasn’t the largest single battle in EVE. That still belongs to the one in LXQ2-T. It’s number 1 on this list made in October of last year.

So back to Asakai in the Black Rise region. The escalation ramped up pretty quickly, for once passionate desires to destroy spaceships are aroused by a target of this magnitude, they simply must be satiated. It is an immortal truism. Pilots around the globe were woken up from their blissful slumbers to take part. Lots of large player alliances (whose ranks swell into the thousands of players) and their even larger coalitions committed serious firepower to the fight early on, essentially doubling down. Reinforcements were called in from all parts of the EVE Universe and quick diplomatic moves brought more players, in real time, to the fight.

The pot sweetened. Shields and armor melted under the weight of lasers, smart bombs and drones. Logistically, it’s actually not too far off from a true modern-day military conflict in terms of communication, coordination and even duration of conflict, where squads and fleets adhere to combat doctrine and coordinated movement. In some ways the scale is larger; in others, smaller. An interesting conversation for those interested in both the history and evolution of military conflict. 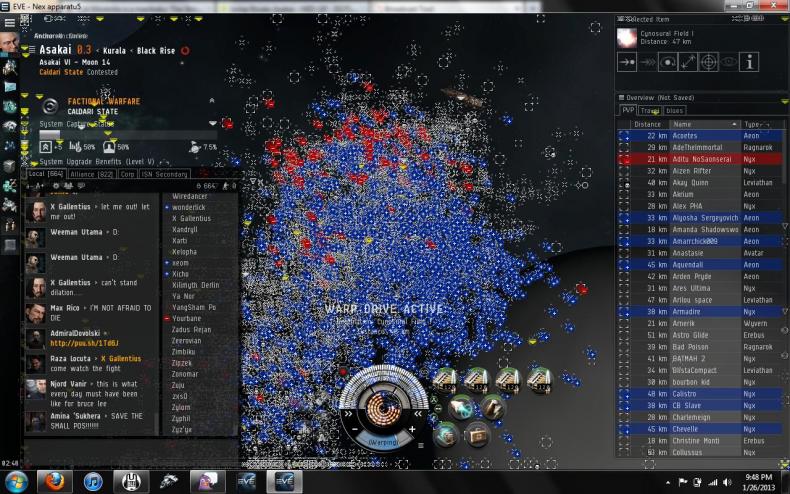 Ultimately hundreds of spaceships, including some quite large ones that can take months to build, exploded amidst an impressive final participant count that would rival entire servers of other instanced MMOs. Basically, EVE’s “sandbox” universe design allows absolute freedom of movement and persistence over time. That system is fueled by the collective imagination of the EVE community that makes the conflicts—well—“real”.  9 straight years of subscriber growth in EVE has meant for a rich history and a population size that allows such tremendous things to happen.

Asakai popped off without much warning because even the littlest action can have repercussions for thousands in EVE. It’s one of the first big lessons people learn about the universe—each decision has a consequence (usually handed out by another player, which is why we named our last expansion Retribution). In this case, literally a single botched ship command. A butterfly wing flutters a monsoon. A lone droplet of blood invokes a feeding frenzy. Part of the reason why EVE players love stuff like this story is because they can, at some level, imagine themselves accidentally doing it. 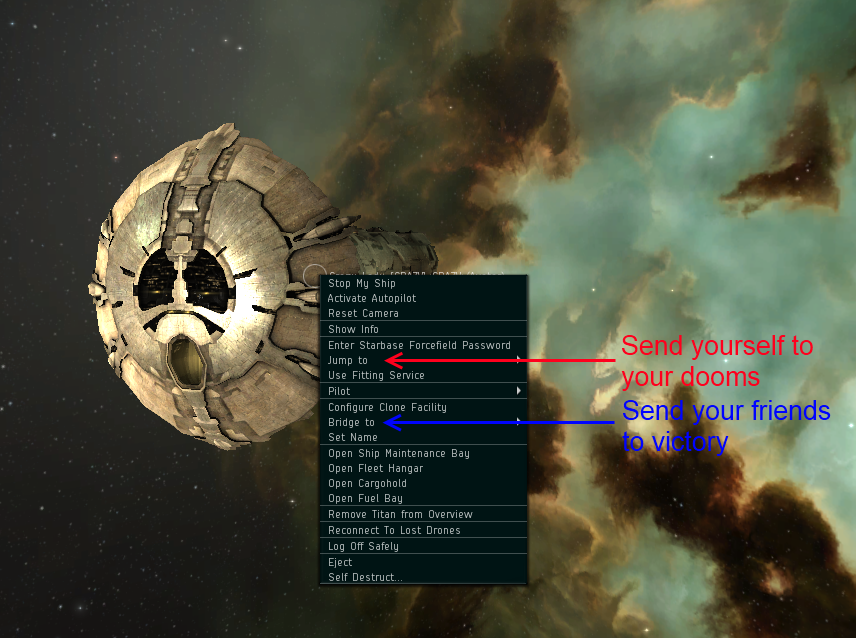 Coincidentally, this weekend a massive completely player-run event left over 28,000 ships destroyed in the Poinen solar system in another part of the EVE Universe during a preplanned RvB (Red Federation versus Blue Republic) Free-For-All event aptly titled “Poinen Must Burn”. Burn it did, with some of the most flagrant disregards for frigate safety we have ever seen. TWENTY-EIGHT THOUSAND SHIPS—a simply staggering amount—added to the weekend’s tally. In many ways it’s a shame it happened at the same time as the Battle of Asakai, as it is truly amazing in its own right.

Here’s the promo video for it:

Throughout all this, happening on the planets below, warfare was raging in DUST 514’s beta. One universe. One massive war in real time. Yes, DUST 514 the PS3 MMOFPS does share the same server as EVE (Tranquility), yet I must set the record straight that this weekend’s battles did not in fact bust DUST 514 connections to the beta. You’ll have to just try harder space pilots!

And, really around the rest of the massive universe, tens, hundreds and thousands of smaller-scale events were each part of this larger web—from economic decisions to construction of spacestations to the outcomes of smaller skirmishes between smaller groups. Will their threads lead to an equally unique event like this in the future? Would a night spent mining Kernite with friends lead to larger ambitions?

This is the scale of the EVE Universe, these are the stories with meaning which in some cases have weeks, months and years of planning, diplomacy and history behind them—and in other cases happen within a few minutes filled with unimaginable panic as suddenly you are thrown into a pitched battle to simply Save Your Ship. The best part is they are all completely player created and aren’t solely limited to the participants. I hope that gives you context to better understand why the Battle of Asakai is a big deal. Why “Poinen Must Burn” and player-driven events like it shape the universe in unexpected ways.

Pause for another picture. 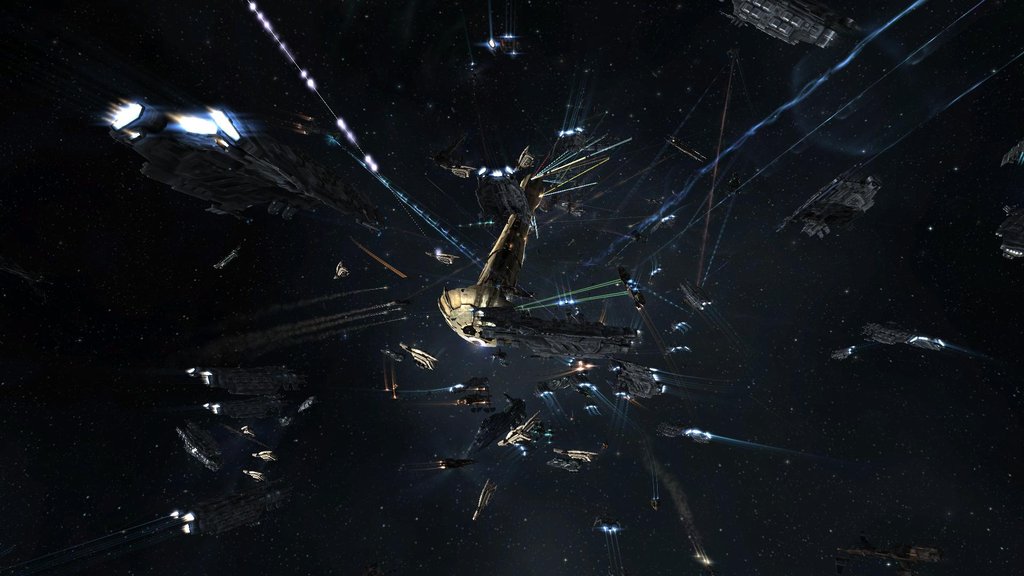 I asked my good friend CCP Masterplan to feed me some Crimewatch information, since it was recently revamped in our latest free expansion.

Below a pretty amazing video of it in action (click to up to 1080p) thanks to FATE being there early on and recording. The voices are the fleet commanders issuing orders to the rest of people in their fleet, using strict military-style comms to direct squads of different types of ships towards targets using real-time threat assessment. The Leviathan mentioned is the Titan.

Woah. Right? If you just glossed over that to read the rest here, trust me and check it out. It’s 18 minutes of neat looking stuff.

So those of you who encounter lag in much smaller server situations in other games might be wondering what happens to the EVE servers during that time? There are a few options on our end, courtesy of explanation via CCP Veritas.

The customer service duders (GMs) keep an eye out for gigantic fights like this.  We’ve got a cluster status webpage that shows big red numbers when a node gets overloaded like it was by this fight, so it’s pretty easy to see what’s up.

From there, a few things can happen:

Past that, there’s really nothing to be done.  The machines run full speed all the time, so Scotty’s not kiddin’ when he says she’s givin’ ‘er all she’s got cap’n.  We have Time Dilation in place to cover us going over what the machine can handle, and that’s all completely automated, so I get to sleep instead of being called at 3AM.

What kind of twisted man is CCP Veritas that he can sleep while this is going on is beyond me. But a quick explanation of “Time Dilation” (aka TiDi) might help.  Basically that’s one way to deal with a massive server load that would crush other games. We actually “slow down time” on a node so that all server calls happen in the right order and the fight becomes fair. If we didn’t do that, the sheer amount of data traveling back and forth (people, modules, positions etc gathered and rebroadcast out to each of them) might mean one side’s modules and commands wouldn’t go through and all of a sudden it is just a game of flip-the-coin. So for this fight, it was still able to happen because time dilated to it’s server saving cap of 10% to deal with the massive amount of people coming in and shooting spaceships. It’s slow, but it still allows for gameplay—a sort of managed lag. Since the system itself slows down but others around the server do not, it actually also helped reinforcements arrive from non-dilated nodes quicker.

So there you go. I hope the overview helped. When thinking about Asakai, I smile to remember that, while it provided direct participation for 3,000 or so people, it actually involved tens of thousands of people in the long run – industrialists, transporters, diplomats, other sleeping alliance mates, spies, random passersby etc etc. Even I and my humble characters feel it reverberating in their much quieter lives several regions away.

And my favorite thing: the common theme echoed again and again in comments about the weekend (with the exception of maybe 1-2 pilots) was that the EVE Universe may be serious business, but it’s also randomly and hilariously fun and that fighting people around the globe whether over a Titan, in a mass of frigates or on the planets, is a good time as long as you are doing it with the EVE community.

As always, stuff you’d like us to see (that might appear on EVE social media) can be sent to share@eveonline.com . Don’t be shy!