Hello all, CCP WhiteNoiseTrash here on behalf of the audio team at CCP.

Our team has often faced the massive challenges there is when developing audio for a game as epic and unique as EVE Online, one of these being that the game is very communication heavy and another is that the game is often played with more than one session of the client open at a time--multiboxing.

We brainstormed on how we could approach some of the audio challenges in EVE and how we can encourage more people to turn sound back on or avoid having them turn it off in the first place. We also explored how to use sound as a tool equal to graphics and text and still stay within the strict aesthetics of EVE’s serious business.

It’s not just about awesome new assets or making a prefabricated mix for players to use which will only sound amazing if you play the game as we have set it up. It’s about making the game flexible enough for it to suit your individual player needs. I had spent hours on the EVE Forums, hours talking to player and other developers, and hours playing the game myself with all this in mind.

One of the ideas that spawned from these brainstorming sessions was the audio customization menu. A menu that would allow you to control individual or grouped sounds with a slider in EVE’s ESC menu. After the idea came up, I started playing the game differently to see how I could solve some of the issues that I was encountering. We looked at various solutions, including how the most commonly used multiboxing tools handle some of the same issues we came across, in order to create a system that would detect the active and inactive windows and turn sound on or off depending on this.

This was, of course, not an approach we could use, as turning off all sounds was not an option. After a lot of communication back and forth, making sure what was possible and not possible; I developed the prototype sketch for the audio customization menu. The result is what you will experience in the game after the release on June 3rd. 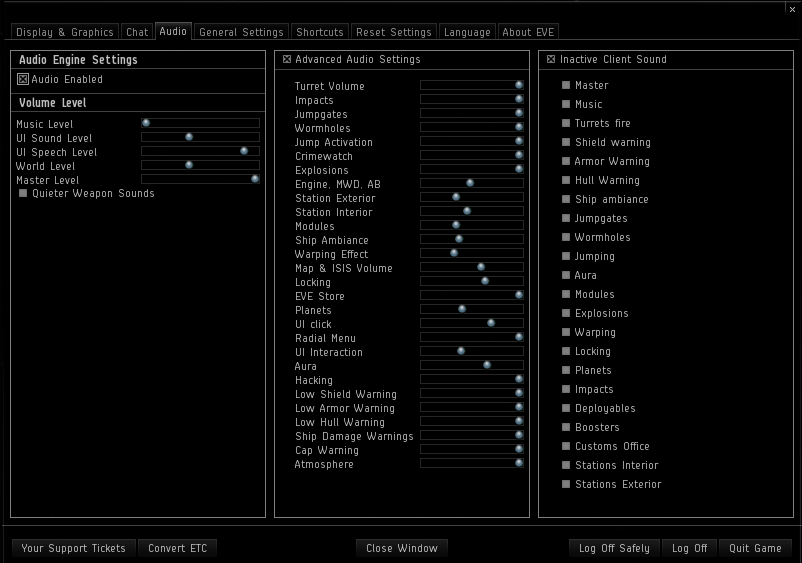 The full menu looks like this. Previously there was only the left-most set of options controlling the master volume, UI sounds and music.

The new menu splits the audio and chat tab into two separate tabs, so audio will have its own and chat will have its own. The key point is to allow for greater control of individual sounds in the advanced audio settings and to the right we have the option to choose which sounds are muted when you leave the client, more on both of them later.

This menu allows players to shape their audio experience in the game in a new way, adjusting which sounds you want less of.

In the future, we will continue to iterate on this system and one of the things in mind is a complete new mix of the sounds in EVE, allowing you to also turn up sounds – for now you will have to survive on the option to lower them only. 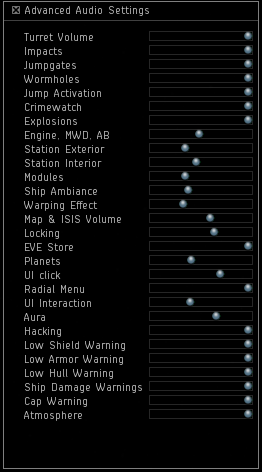 The advanced audio settings can be switched on and off by clicking the checkbox at the very top, offering even more customized control of sounds. 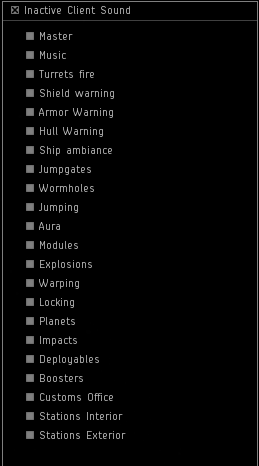 Here we have the option to choose which sounds are audible when not using the actual client.
A typical setup would be to either have the master or music always checked, especially if you are using several clients, this would allow for the music to be playing all the time, but gently fade between the clients depending on your location in space.

Some of these are the same as the sliders; shield, armor and hull warnings affect the same areas as the sliders, but only if you leave the client. So checking the Shield Warning will make it so that you won’t hear any kind of warning sound from your shields on the clients you are not using.

Stargates, wormholes and jumping: are all the ambient sounds and the actual jumping effect.
So if you are auto piloting, you may not want to hear all the jumps, but if you are scouting a gate or a hole, you may want the sound specifically on, but not everything else.

Aura: autopilot jumping, to be turned off from the client you are not using at the moment.

These settings are here to help you get a better audio experience when playing EVE and exert more control over the sounds of the game when multiboxing.

This is the first step of many towards a better sounding EVE Online experience.

We at Team Klang hope that you enjoy this new feature and use it to its full potential. Join the discussion on the forums and help us by telling us what you would like in the game. We cannot guarantee that your specific needs are fulfilled, but this system is the product of many hours of discussions with players and others and the combination of many ideas and prototypes spawned only because players, as yourself, said you wanted something different.

All the best from Team Klang