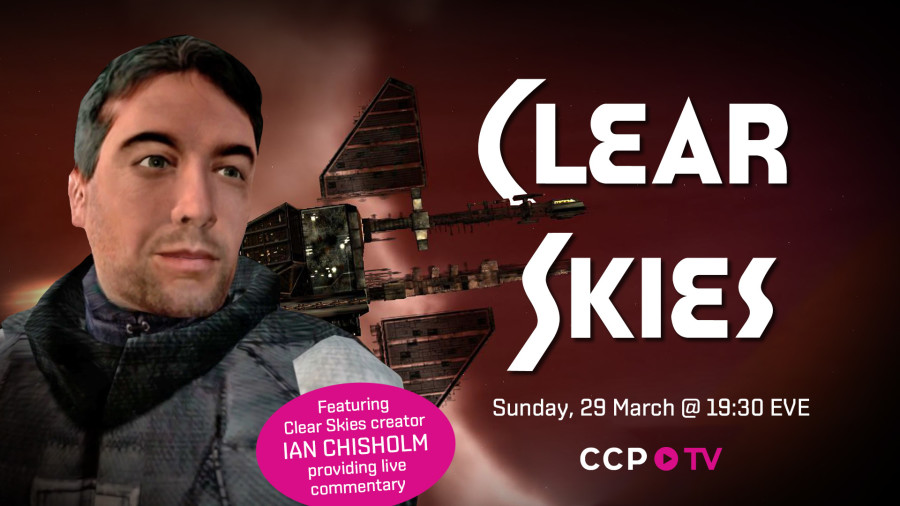 EDIT: Just a reminder that DST comes into effect for many parts of Europe at 1am on Sunday. EVE time is always UTC+0 so don't get caught out!

Clear Skies is one of the most ambitious and successful creative endeavors to ever come out of the EVE Online community. When the first Clear Skies movie landed in 2008 it was the culmination of years of work by its creator Ian Chisholm and was met with wild acclaim. As well as being immediately embraced by passionate EVE players, it would also go on to win several machinima awards and expose EVE Online to a larger audience.

Spurred on by its reception, Ian would create two further instalments and each one would be more sophisticated and polished than the last. The trilogy concluded with Clear Skies 3 in 2011. We published a Community Spotlight article on Clear Skies in back 2012 which has a lot of information about the creation of the series.

With the current situation where many of us are holed up in our homes, isolated from our friends, workmates and regular lives, we thought it would be nice to fire up the friendship machine, watch Clear Skies together and celebrate the two best ships in EVE.

On Sunday, 29 March from 19:30 EVE time, CCP TV will be hosting a marathon of all three Clear Skies movies back-to-back on our Twitch channel, and we're excited to let you know that Clear Skies creator Ian Chisholm will be joining us live on the stream to provide a running director commentary throughout the marathon. No doubt he'll be able to share a lot of interesting insights into the production and technical hurdles he faced while making Clear Skies. Even if you've watched Clear Skies before, this should be a new experience!

After the movies conclude, Ian will stick around for some Q&A with the viewers where you can pitch any questions you have about the series or maybe ask if there's something new in store for John Rourke and his crew...?

So come along, hang out and chat with your fellow internet spaceship enthusiasts and enjoy some awesome EVE Online machinima.