The Dominix, Work In Progress And A New Art Director | EVE Online

The Dominix, Work In Progress And A New Art Director

Things are slowly getting back to normal after our V5++ shader efforts. As you might be aware of, pretty much all of the art team was on the V5++ project for a big part of winter, and while there is still some work left on that front, we are finally getting there.  If you missed it, you cna take a look at this dev blog for more information on the V5++ project.

Once we got some breathing room to start on other projects, the Dominix quickly stood out as an obvious choice!  It´s by no means a new project, as the design created by CCP Caiman has been ready for quite some time.  Unfortunately workload pushed the actual creation of the asset back several times.  This is not unusual for us. We usually have some re-designs ready for a 3d artist to tackle when time frees up. 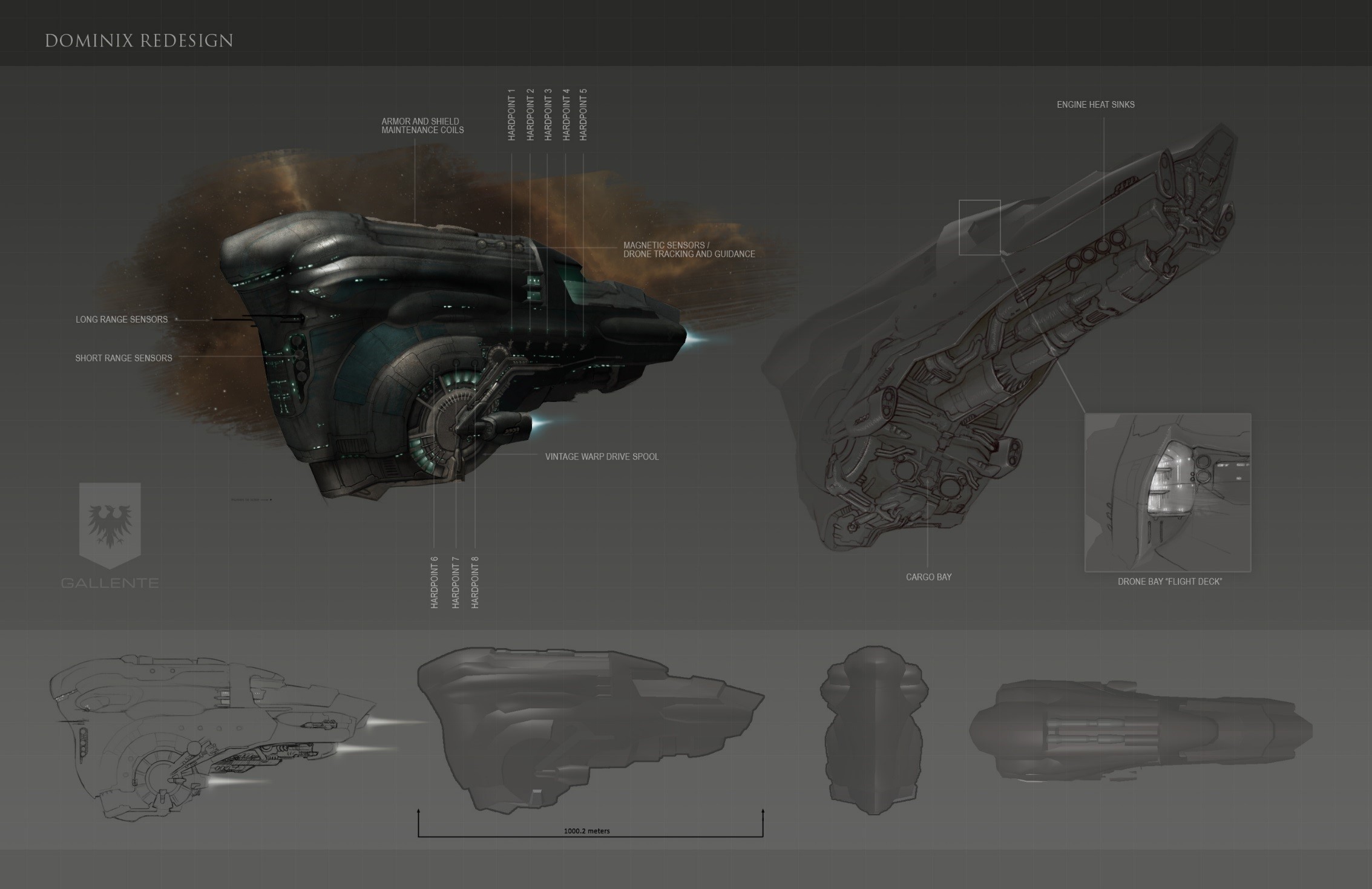 When redesigning the Dominix we thought about keeping the retro-feel of this old warhorse, so the silhouettes and base design aesthetics are quite similar to the original version. Now we finally have a small window to dive into this very much awaited project.  CCP Bluescreen is relentless these days building the asset and getting it ready for the texturing phase.  We are very excited to see the final version and it will hit your hangars in the upcoming release in August. 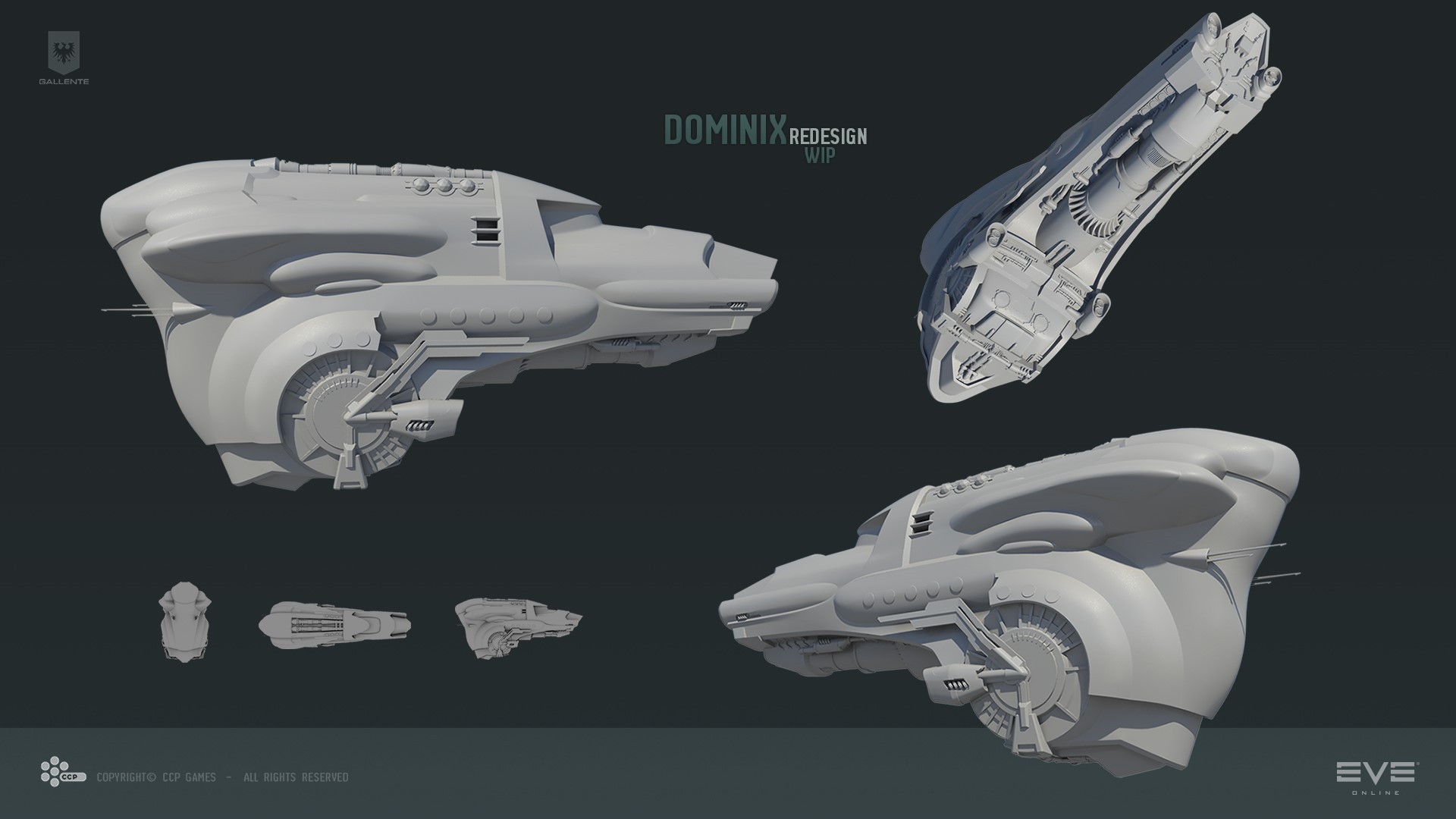 Minmatar ships are also getting some focus on the redesign front these days.  We are constantly looking to evolve the style and feel to our spaceships in our efforts to modernize the ships of New Eden. Sometimes we go for bold designs, changing things up a lot from the original versions. At other times minimal changes are required.  It’s a fine line in the direction we decide to take.  Here are some ideas we are working with at the moment.

These are still works in progress, not planned for any release at this stage, but will give you an idea on what we are thinking. 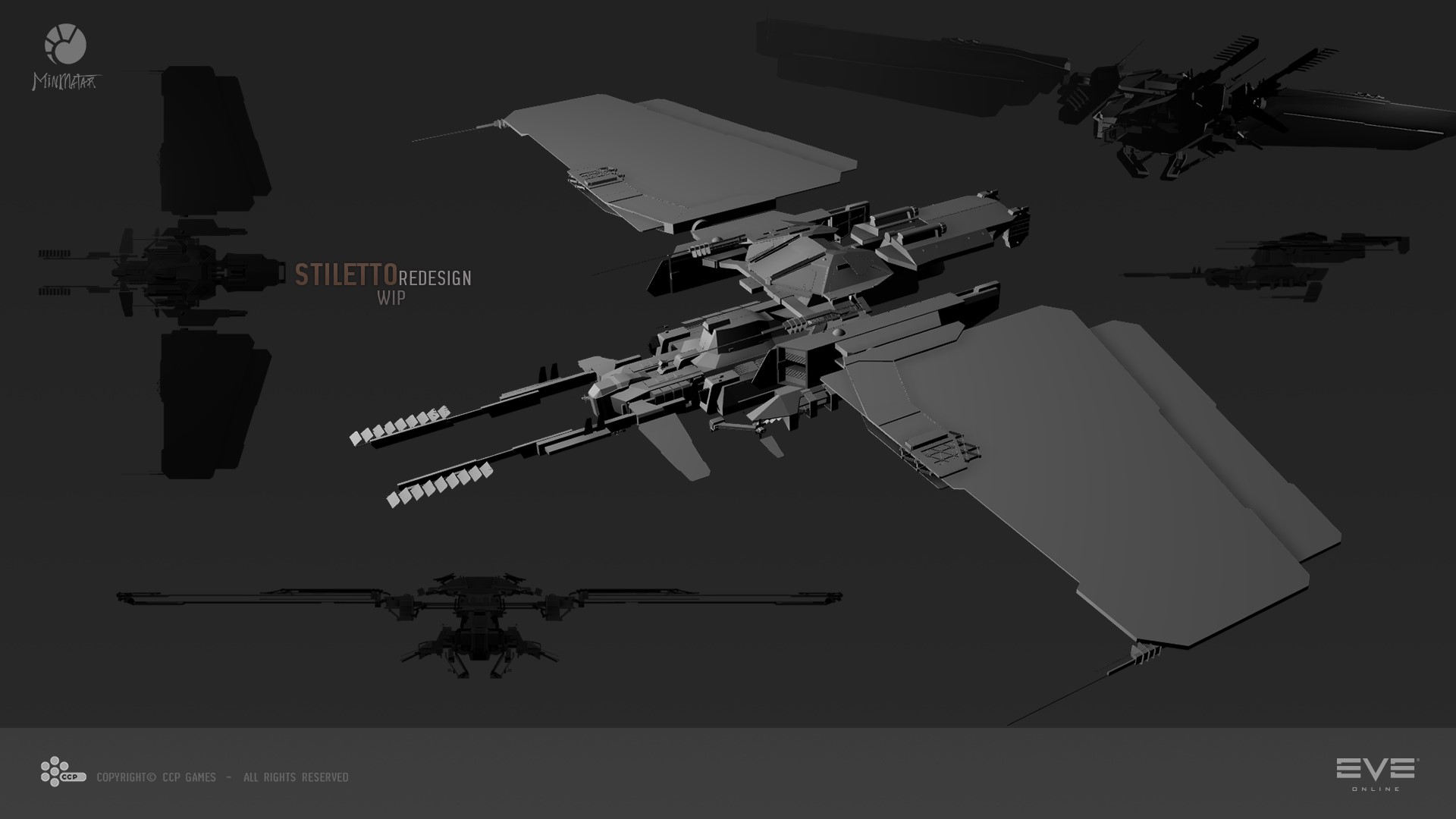 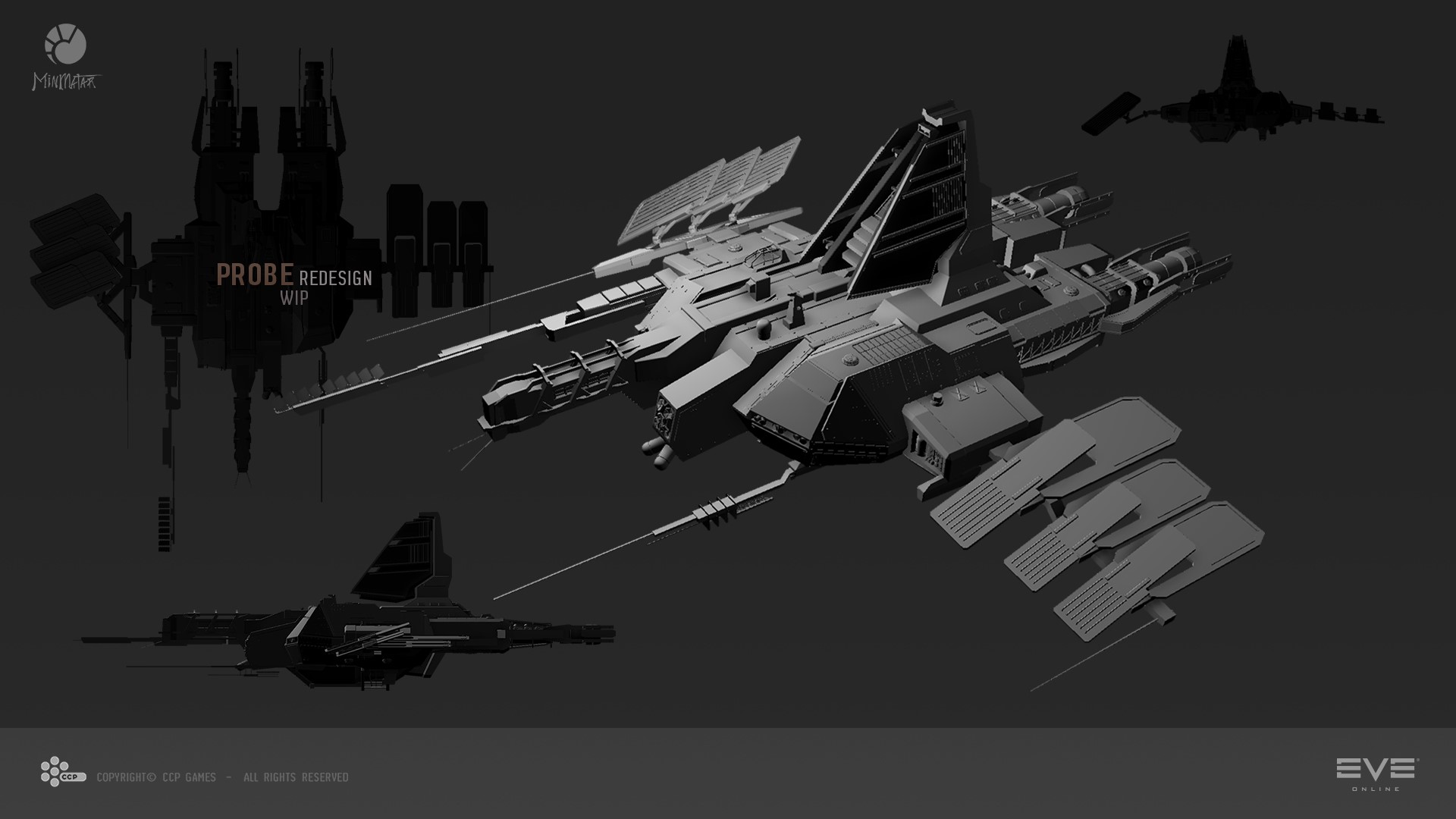 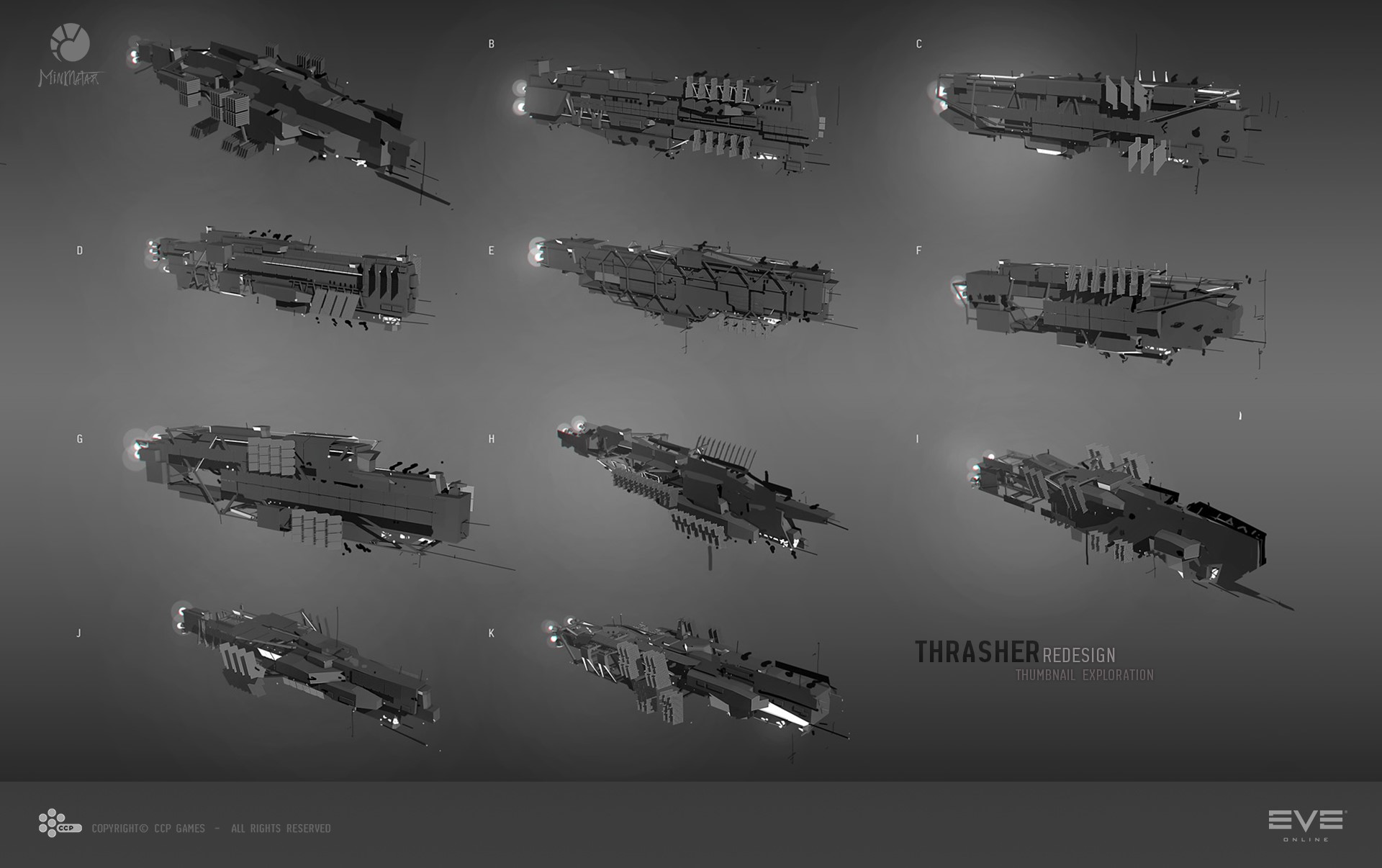 Closing in on a new Thrasher: 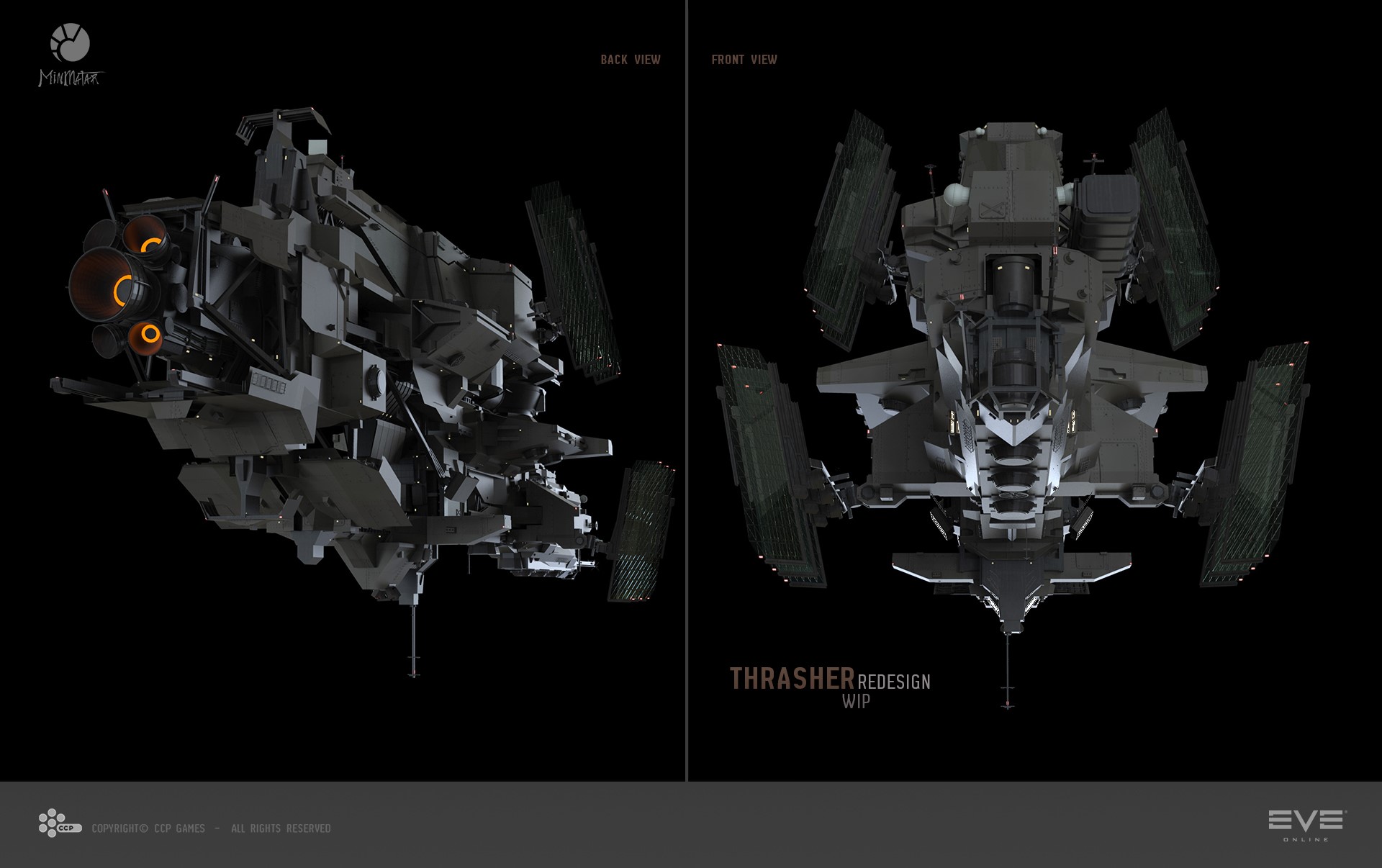 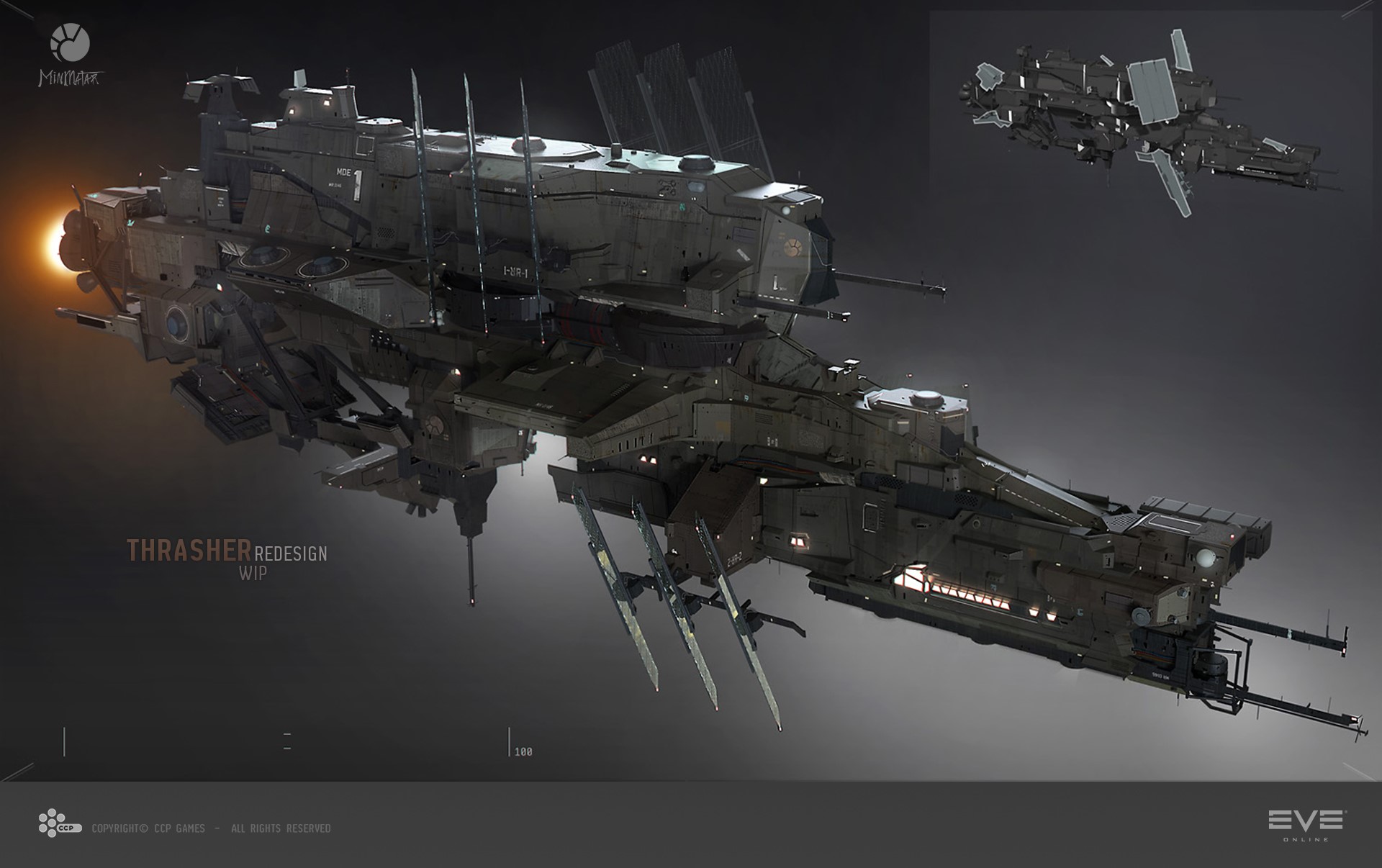 Variants of the Thrasher (possibilties for the Sabre) 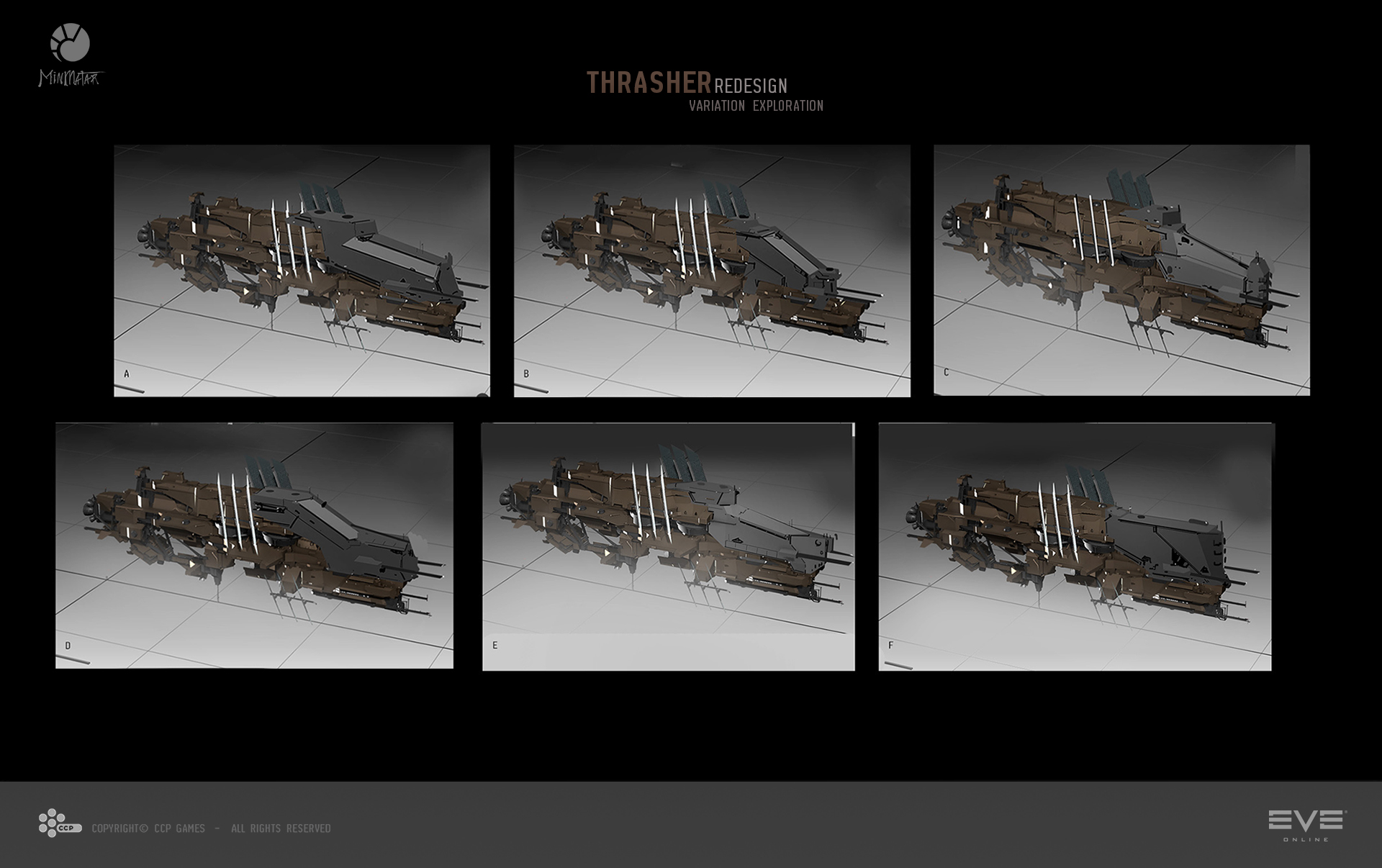 We really like the direction the Minmatar ship design academy is going.  Have a look, give it a thought, and tell us what you think!

On the note of influence from the citizens of New Eden: I think the Caracal and Cerberus are worth mentioning.  After we showed the Caracal redesigns earlier this year, the EVE Reddit community started making its own versions. It was a blast looking through all the variations created! Some were very humorous, others quite to the point!  A couple of designs stood out where the common denominator was shortening and lifting up the front of the Caracal.

These kind of design changes to the Caracal are typical design questions we have to think about when redesigning a ship.  This also relates very much to my earlier point on redesigns in general and whether we should go for bold changes or not.  When we designed the Caracal we kept the long, dropped front feel of the Caracal – it is quite iconic for the ship. Should we have gone for a bolder design?  After looking through the feedback on Reddit we thought it was a no brainer – thus the new Cerberus was born.  We made a quick paint over with the design changes, posted it to Reddit and people seemed to like it.  The main concern from the players after that was if the re-re-design would make it into production any time soon.   I´m very happy we found time relatively quickly to finish the work and the Cerberus is coming in the upcoming Aegis release.

We really enjoyed this little collaboration, and hopefully we can do more in the future! 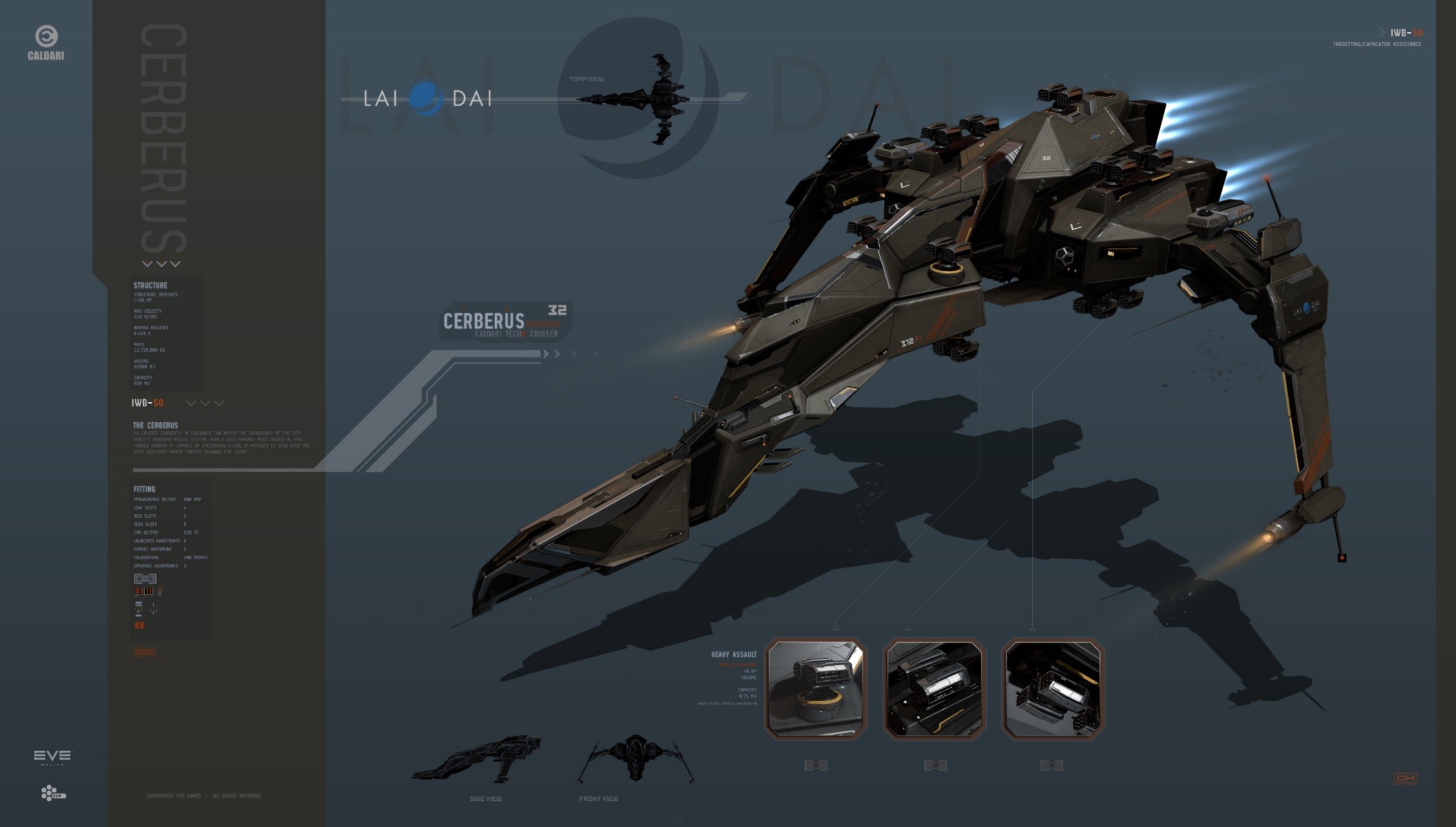 In other news, as of next month I will take on the role of Art Director for EVE Online.

I´ve been concepting for EVE Online now going on 8 years.  In that time I´ve tackled various projects along the way—Tech III ships, various ship designs and redesigns, most the turrets and missile launchers when we redid them, all sorts of background work, illustrations,  icons, and  last but not least the Caracal/Cerberus and the Hecate. 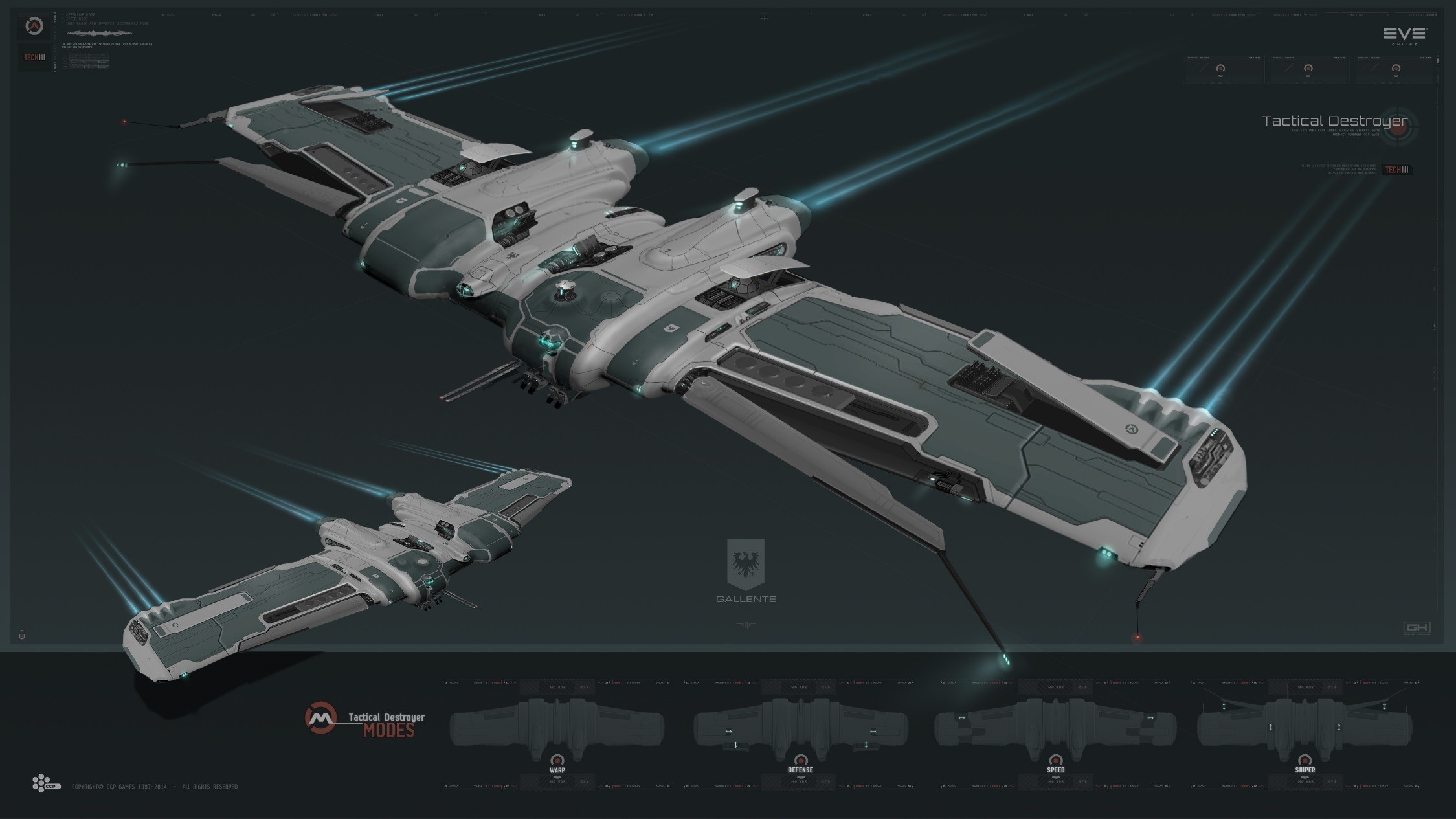 Our Art Director CCP Huskarl is leaving us to embark on a new journey after more than 15 years of devoted service to New Eden. He leaves behind countless designs and the tremendous legacy of the style of New Eden.  We owe him much appreciation.  Thank you for everything and good luck in your adventures.

Filling the shoes of Art Director for EVE Online is quite a challenge to say the least, and very exciting!  I´m up for the task and will do my best to work with the artists and hopefully find new ways to interact and collaborate more with, you, the awesome EVE community.

CCP Jörg, over and out!