Rebalancing EVE, One Module At A Time

Hello again innovative capsuleers! This is CCP Fozzie bringing you another dev blog covering balance improvements that are coming your way with the upcoming Oceanus release.

This is an exciting blog for me, as we are finally ready to begin releasing the next phase in our ongoing quest to improve the selection of ships and modules available in the markets and contracts of New Eden. This blog will cover the high level plan for our “Module Tiericide” project, as well as the details of what our first steps will be in Oceanus.

We first brought you the plans for our Module Tiericide project in the Ship and Module Balancing presentation from 2014’s Fanfest. The basics of the plan haven’t changed, but I’ll repeat them here so that we’re all on the same page.

The basic goals of our Module Tiericide initiative mirror the work that we did in the field of Ship Tiericide throughout 2012 and 2013.

The Story So Far

Before Tiericide, tech one ships were split into artificial “tiers” that were intended to represent a progression from weaker ships to stronger ships. Lower tier ships required lower skill levels and cost less, but were much weaker. Higher tier ships enjoyed extra slots, more hitpoints and powerful bonuses. In practice, this system presented a false choice, as everyone correctly flocked to the highest tier ships and the lower tiers languished in disuse.

As CCP Ytterbium outlined in his Fanfest 2012 Balancing presentation, followed up with multiple dev blogs, the Tiericide initiative replaced those old tiers with a series of ship lines that represented distinct strengths and weaknesses for distinct roles. Each tech one ship within the same class (like “cruiser” or “frigate”) post-Tiericide is intended to have roughly similar overall power, but that power can and should be expressed in a variety of forms.

With Module Tiericide, we are taking our aim at another set of tiers that can stifle choice: meta levels.

The meta level attribute is partially used to differentiate classes of modules behind the scenes, but it’s most visible place for players is with the so-called “meta” modules (also known as named modules). Named modules drop from NPCs all over EVE, and were originally intended to represent a tiered set of special upgraded versions of the base T1 module. Since their names are not very helpful in determining their power level, most players have come to rely on their meta level attribute to figure out which is best at a glance. This is why the phrase “meta 4 module” has become so common in EVE.

The problem with this system is that cost/rarity tiers only work as gameplay tools if the differences in rarity and/or power are very significant. Named modules have suffered from the same problem that the old Tech One ship tiers faced before Tiericide; there’s virtually no reason to use anything other than the top level.

This image gives a basic overview of how the meta level attribute is used now and how it will be used after Module Tiericide is complete: 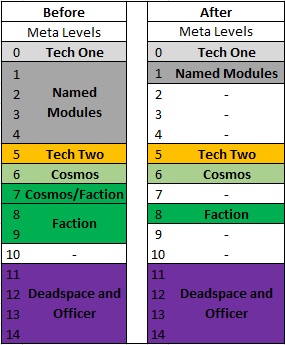 You’ll notice that we are keeping the meta level progression for deadspace and officer modules. At these rarity levels the progression system is a bit more successful and can provide some valuable choices. We will be making changes to the balance surrounding deadspace and officer modules but we have no plans to unify their power levels at this time.

There is a set of images that I showed at this year’s Fanfest that still apply very well to our Module Tiericide plans, so I’d like to repeat them here. They use the hypothetical example of a beam laser module, as that example provides a lot of options for named module specializations.

This images shows the current state of meta level progression in EVE. The power level increases along the x axis, with damage modifier being the key “power” metric for lasers:

You can see that the modules mainly fit into a linear path of advancing power, which does not represent a very interesting set of choices for the player.

After the Module Tiericide of beam lasers has completed, the chart would look more like this: 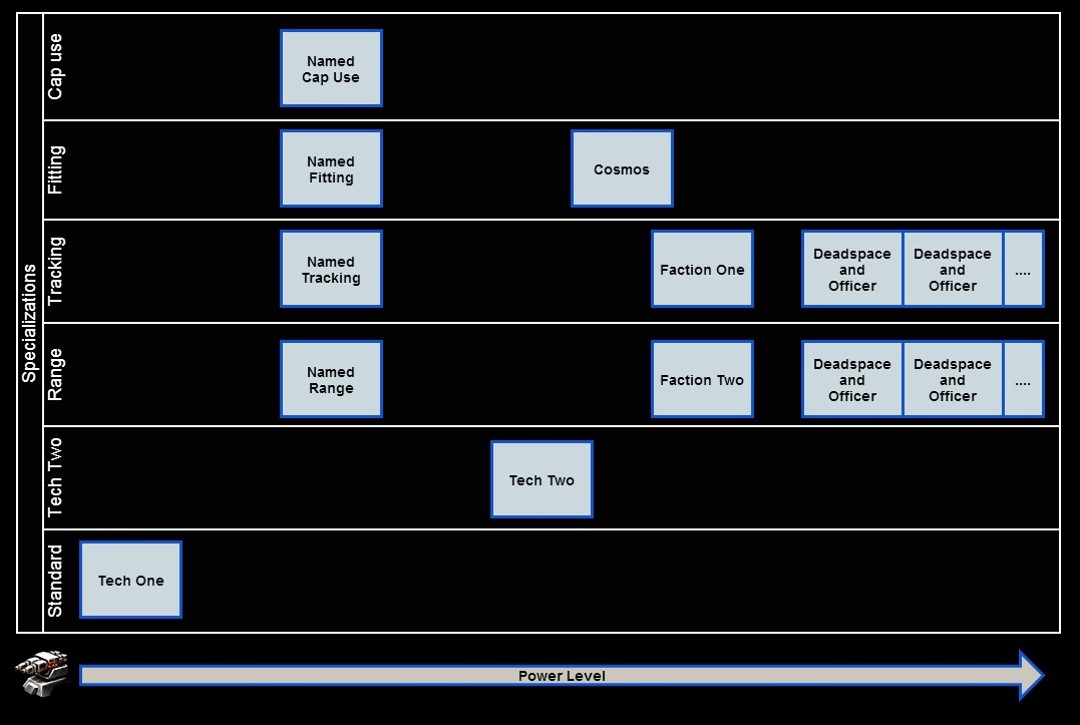 Under the new system, named modules will fall into anywhere from one to four areas of specialization, so that players can choose what attributes matter the most to them.

Each specialization will also have a unique name that is consistent across all named modules, so that if you see a module with the word “Compact” at the front of it you can know that it has reduced fitting costs no matter what type of module it is.

The “named module” names that will be used in our Oceanus changes are:

At the same time we will be consolidating the so-called “Basic” tier of modules. These modules generally have lower skill and fitting requirements than T1, and provide a very small bonus in exchange. “Basic” modules stopped entering the game quite some time ago, but the remaining copies of the modules are sometimes used for niche fits. We will be consolidating these modules down to one type, which will generally be equal or better to the best “basic” module in the class pre-Tiericide. This new module type will be clearly labelled as “Basic” and will have the COSMOS tag to indicate that it’s a special snowflake.

Some modules will have fewer viable specializations, and in these cases we will be consolidating many types of modules into fewer types of modules. When this happens, we will follow the same procedure each time:

You’ll see the exact plans for what modules are being consolidated in Oceanus below.

What Modules Are We Starting With?

In Oceanus, we are starting the Module Tiericide project by applying the process to eight groups of modules. All of these modules represent fairly simple sets of changes as they do not have very many potential variations. They will serve as the launching point as we start the process of applying Tiericide to every module group in EVE.

The module groups being changed in Oceanus are:

Co-Processors represent the simplest possible set of named modules, since there is nothing but basic power level to differentiate modules within this group. This means that the only named version will get the title “Upgraded” and all of the current named co-processors will be converted into Upgraded Co-Processors.

Beyond the changes to the named versions, we’ve also consolidated all five “Basic” versions into one single “Basic” type. The “Basic” type will get the CPU bonus of the old T1 version, and both the T1 and Upgraded versions will be getting a boost to bring them closer to T2 in power.

Finally, we’ve also gone ahead and cleaned up the progression among the faction officer versions of the Co-Processors. This mainly takes the form of bringing the Gallente/Serpentis variants up to par with the Caldari/Guristas ones. The Federation Navy, Khanid Navy and Shadow Serpentis variants will now give an equal bonus to the other faction Co-Pros and we’ve fixed up the progression among the officer variants to bring Serpentis and Guristas to parity.

Reactor Control Units also only have room for one named module, but since they have CPU requirements, this one named module will use the “Compact” fitting specialization. All current named RCUs will be converted into Compact Reactor Control Units, which will provide a bigger powergrid bonus than any of the current named variants to put it between T1 and T2 in effectiveness.

Reactor Controls are another class where we are cleaning “Basic” variants up into one type, placing it in the Cosmos category just as we did with Co-Processors.

We are also fixing the Shadow Serpentis RCU to match the other faction variants in effectiveness.

Micro Auxiliary Power Cores (MAPCs) will also only need one named specialization, but in this case we are making special consideration for owners of the currently Meta 4 Micro 'Vigor' Core Augmentation. The current metas 1-3 named MAPCs will be converted into the new Compact Compact Micro Auxiliary Power Core but the Vigors will be turned into Navy MAPCs over downtime.

We are also making some general balance changes to the Light Missile Launchers as a whole. The time between module activations of LMLs will increase by ~6.66%, resulting in a slight decrease in total DPS. This change is being made to help balance the Light Missile weapon system, which received buffs that were a bit too strong back in the Retribution expansion.

For Cargo Scanners, Duration and Scan Range are both important stats, while there’s not a lot of option for a fitting variation. So we’re going for two variations. One that has reduced duration, called Enduring Cargo Scanner. It has reduced cycle time and reduced cap need (3 instead of 4). The other has better range and is called Scoped Cargo Scanner.

To align the new modules better, we’re also reducing the CPU of the tech I Cargo Scanner from 5 to 4.

For Ship Scanners, duration and range are also important, but the difference between Tech I and Tech II is less pronounced than for Cargo Scanners so making variations on those stats doesn’t make sense. However, fitting variation is much more viable due to higher CPU requirements. So we’re going for one named module, called Compact Ship Scanner, focused on reduced fitting requirements.

Ship Scanners also have scan falloff, as ship scanning results are not binary as they are for Cargo Scanners. The named variation goes for a scan falloff in between Tech I and Tech II.

No changes are being made to the Tech I and Tech II versions.

For Survey Scanners, the only thing that really matters there is the range. So we’re going for one named variation, focused on range and called Scoped Survey Scanner.

No changes are being made to the Tech I and Tech II versions.

Capacitor Flux coils needed a pretty significant power boost across the board, so we are starting with that by bumping the net cap recharge boost by quite a bit and lowering CPU requirements for all variations.  We are lowering the number of named variations to two, one fitting variation and a second that has a reduced capacitor capacity drawback amount (but similar overall cap recharge).  Again, we are cleaning up the “basic” variants and collapsing them into one type.

As you can see, the changes arriving in Oceanus represent the tip of the iceberg for the module work that is coming your way over the coming months. This Module Tiericide project involves input from five development teams within CCP and we have high hopes that it will be just as beneficial as the Ship Tiericide initiative has been. Of course this also doesn’t mean that we’re going to stop our ongoing work on ship balance and on introducing new ships. You’ll be seeing a mix of module balance, ship balance and new items from release to release as we continue to charge forward with our 5-6 week release schedule.

Thanks for joining us for this dev blog, and I hope you’re looking forward to Oceanus as much as we are!