Changes Coming To Planetary Interaction With Into The Abyss

If you would like to discuss this dev blog, feel free to head on over to the feedback thread on the official forums.

Most of the changes are aimed at making setup and maintenance of your colonies less painful, especially when it comes to all the clicking that is currently involved in setting up a colony. A rough count for setting up a single planet with Command Center, Launchpad, Extractor with 10 heads, 12 processors and links and routes for all the processors came out to around 300 clicks. 300! Let’s look at the changes we are introducing and where this number ends up.

First things first, do you want to play a little game of spot the difference? 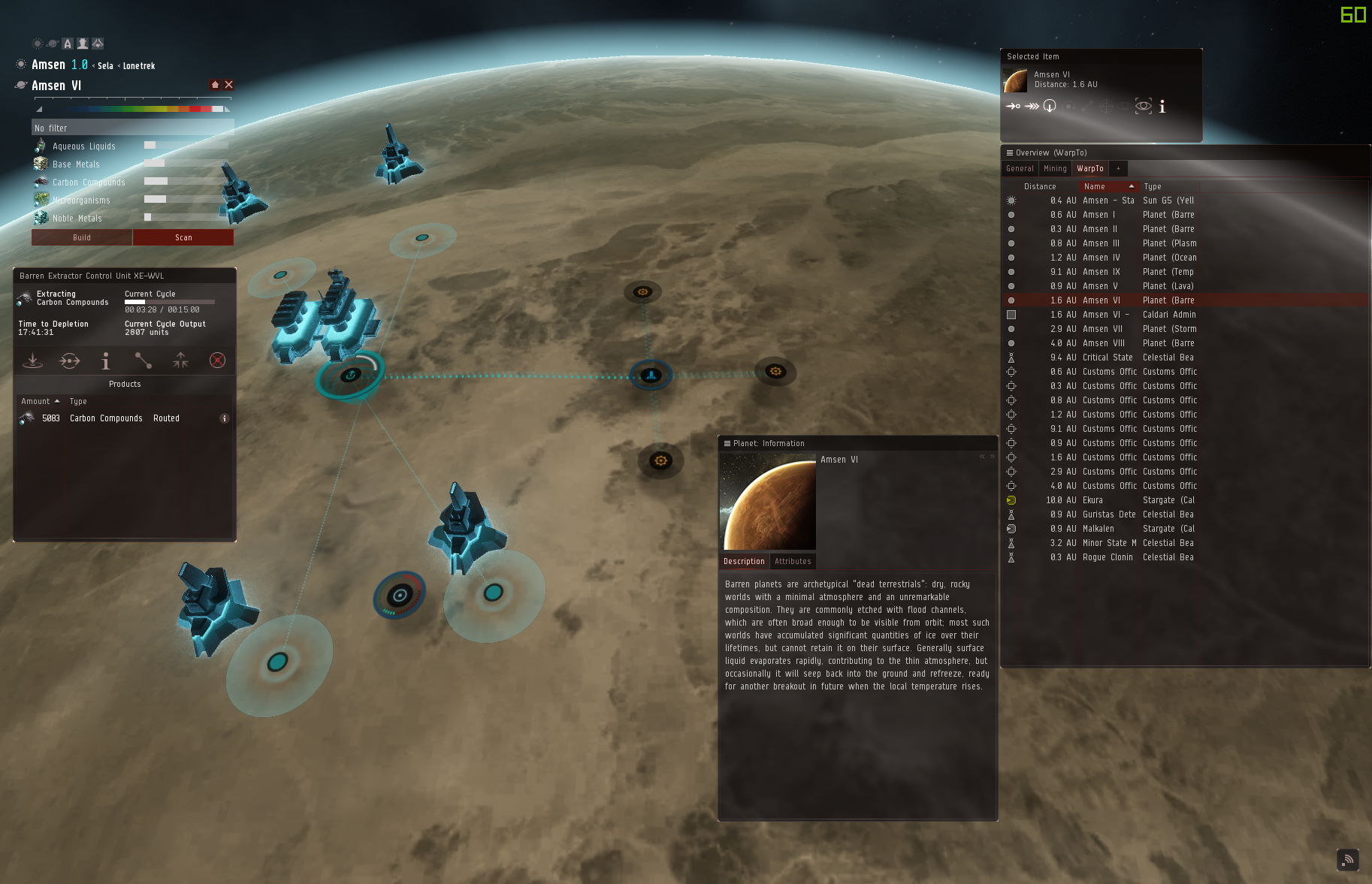 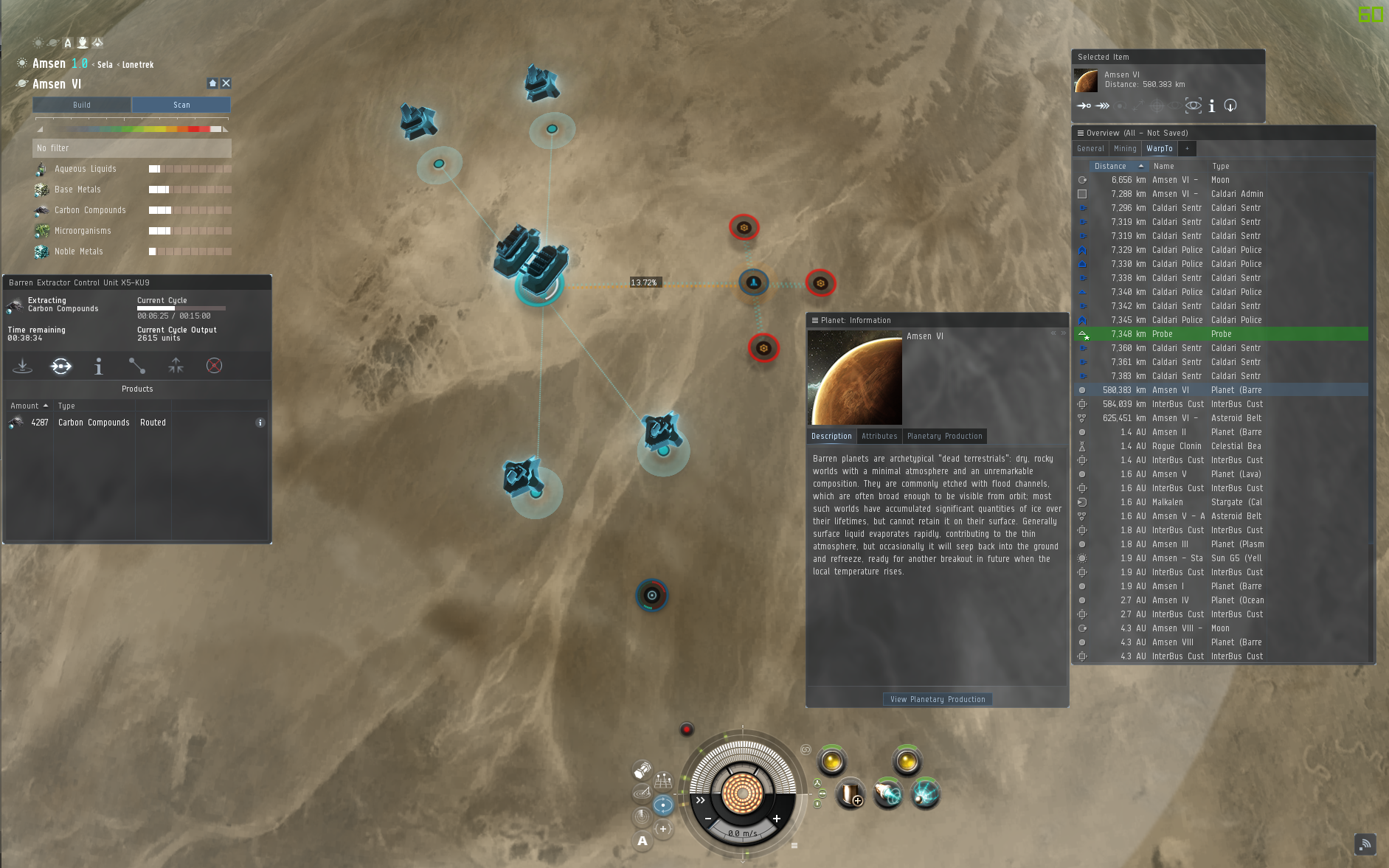 So, you have messed up your pin placement. Wouldn’t it be great if there was a handy tool that would allow you to delete the pins without having to click into the pin and select decommission and then confirm that you really want to delete that pin. Introducing the new Decommission tool.

Hands up if you have setup a planet, gone away for a day or two thinking that your PI is happily processing away, then you come back to find out that you completely forgot to route the goods from your processor and you have produced nothing. Hopefully we can help you with that. We are changing it so that if a pin is not fully setup it will have a pulsing ring around it and the pin window should clearly state what is required to complete the setup. Once the setup is complete the pulsing ring will change color and display a brief animation to confirm that everything is complete.

We are improving the memory of the pins. Selecting pins of the same type will open the pin window at the same tab you previously had selected. The processor pins will now remember that last schematic you installed so selecting a new processor pin should open the window to the schematic tab with the last installed schematic already selected.

The current flow for learning what resources come from what planets and then what can be done with these resources needs some updates.

We are going to be adding tooltips in the PI windows when you hover resources or entries in the build menu. Build menu tooltips will show you what that pin is used for, how much it costs, and the power and CPU usage.

We have also made the following changes: 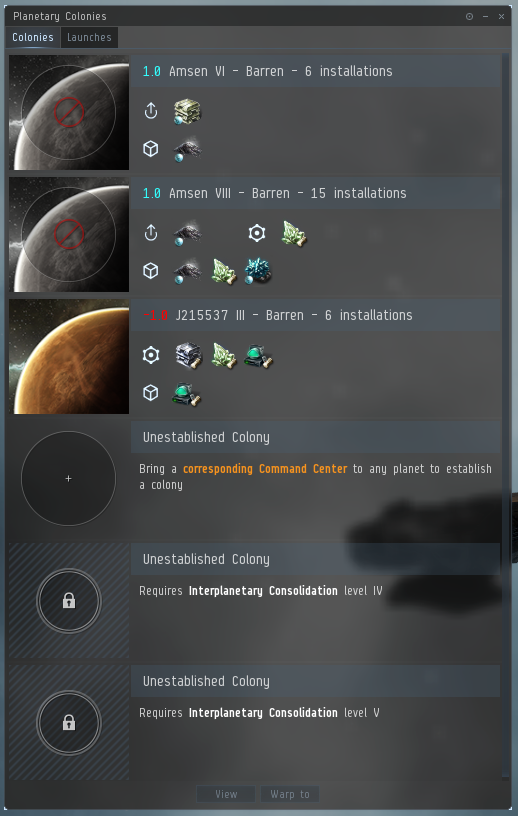 We are also updating the Planetary Colonies window. The previous window did not tell you much more than the System the planet was in, the type of planet and the amount of installations. The update to the window will show you this and more.

The previous colonies window was empty if you opened it and did not have any planets setup. The new window is going to have 6 slots as this is the maximum number of planets any character can have with the Interplanetary Consolidation skill trained to V. If you do not have the skill trained to V we will show you what level you need to unlock each new slot. If you have the skill trained but are not currently using the planet then we will show you what you need to get setup on the planet.

The clicks, what about the CLICKS?!?!?

With all the above changes, where are we at with the clicks to setup the single planet with Command Center, Launchpad, Extractor with 10 heads, 12 processors and links and routes for all the processors. Another rough count has us down to roughly 185 clicks. There are possibly some other areas where we could reduce this number and we would love to hear your feedback on this.

The changes will be live on our test server Singularity soon and we appreciate any feedback or comments you have. If you discover any issues with PI that you believe to be a bug then please report them from within the client using the F12 menu.