Welcome to the latest installment of the Community Beat! It's a feast for your eyes this time with a stack of terrific player made videos that have appeared on our radar since the last edition. Read on!

The first weekend of the Alliance Tournament was an explosive success with match after match showcasing some amazing EVE PvP. Unlike the Trials which took place on the Thunderdome tournament server, the AT finals happen on Tranquility and all ships and modules are paid for by players. The first weekend saw 386 ships worth nearly 260 billion ISK destroyed. 💥

There were some surprises with strong teams like Hidden Leaf Village, Bright Side of Death and Pandemic Legion being sent home as well as Brave Collective’s startling wins over Fancypants Alliance and Big Yikes to keep them in the winners bracket.

Click the image below to watch the nailbiting battle between Arrival and Hidden Leaf Village: 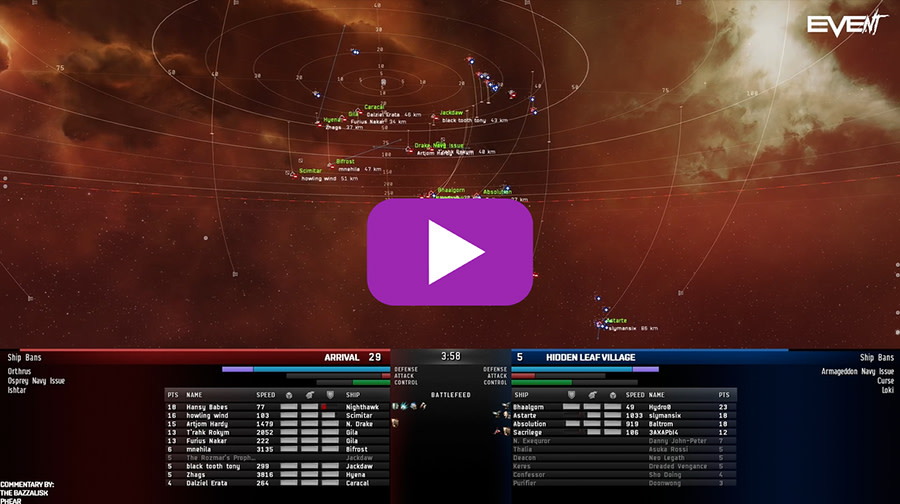 18 teams remain but only one will be crowned Alliance Tournament XVIII champions and write their name into the history books of New Eden. Make sure to tune in to CCP TV this Saturday and Sunday from 15:00 UTC to find out who!

The situation: you’re in the Proving Grounds, it’s a 1v1 frigate duel and your opponent flying a Kestrel is kiting your Rifter and raining down light missiles while you struggle to get in range. Most of us would probably just resign ourselves to our fate, but in this situation Meha Taredi from Brave pulls out a galaxy brain move to snatch victory from the jaws of defeat.

Next up is this really well filmed and edited video from hookk from the Minmatar Militia showcasing some of the action that's been ramping up in the warzone since the arrival of Uprising. There's a sneaky plug in there for EVE Pandora as well!

Switching sides we now have another beautifully filmed and edited video from Eaglefirefly Gaming depicting the final moments of the conquest of Saidusairos as it flips from Minmatar to Amarr.

Despite his stubborn refusal to give up on the old abyssal 1v1 cruiser arenas, Gustav Mannfred still throws himself into the Proving Grounds with reckless abandon. This weekend he will be streaming both the 1v1 battleship and 1v1 navy destroyer events and each day he'll be raffling off two navy destroyers and a navy battlecruiser to lucky viewers.

He'll be going live around 11:30 UTC each day and you can watch his stream here.