Looking back at nearly 20 years of EVE’s player data can be quite the journey, and there’s nothing we love more than discovering what you get up to each day in New Eden. Even one player across a single year can leave quite an impact, as you can see in your end of year personalized videos:

This week 28th of July at 14:00 UTC, CCP Bjorn will be doing a CCP TV stream looking at what we can all learn from EVE Player Data, to follow the EVE Data & Analytics presentation from Fanfest 2022. That particular presentation highlighted the player data from the event attendees, showing their effect on EVE while exploring general gameplay statistics for their characters.

For those that that missed it, the full video recording can be found here:

To recap, here are a few highlights from that presentation, and some of the visualizations shared.

The visualization that perhaps sparked the most interest from Fanfest attendees was the race bar chart animation. It represents the cumulative active character logon minutes in thousands of hours between 2012 and Fanfest 2022, for each character belonging to a Fanfest attendee. The animation only shows the Top 20 characters at each time and sort order is updated every day.

Check out the video below to enjoy the exciting race between Fanfest‘s most played characters from 2012 to 2022.

We recently sent out a certificate the top players featured here to commemorate this significant achievement and pay homage to their time and dedication to EVE. 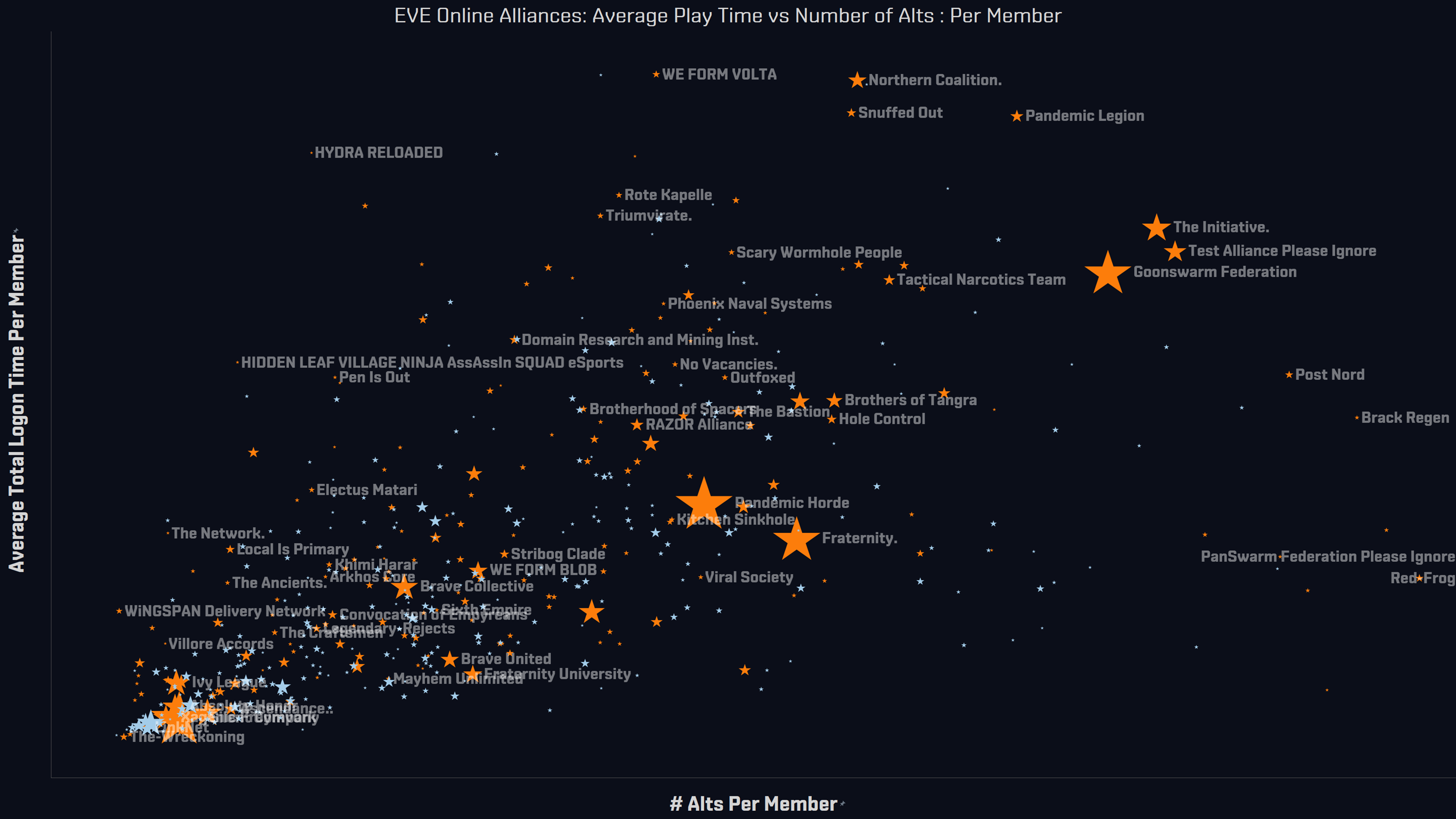 This is a great way to see the largest and most active Alliances in EVE. 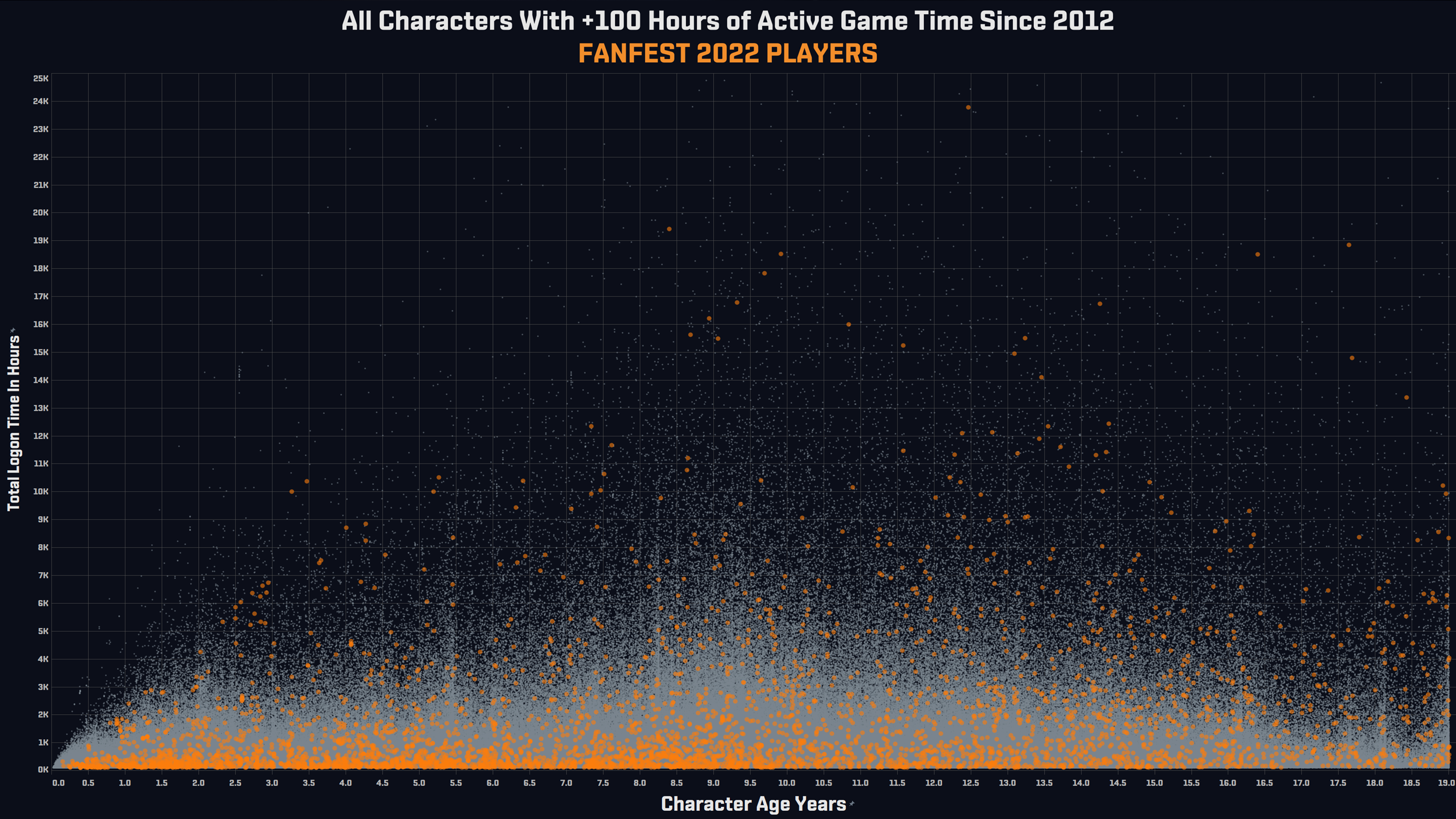 The orange larger dots are characters owned by Fanfest attendees and the gray smaller dots are all other player characters. The further right you look,the older the character is, in terms of days since it was created. The further up in the chart you go, the more total logon hours (shown in thousands) the character has. It is interesting here to see that quite a few characters have maxed out of the character age axis, meaning they were created in the very first few days following EVE’s official launch.

In fact, five characters owned by FF22 attendees were created on the day EVE was launched, May 6th 2003! Here they are: 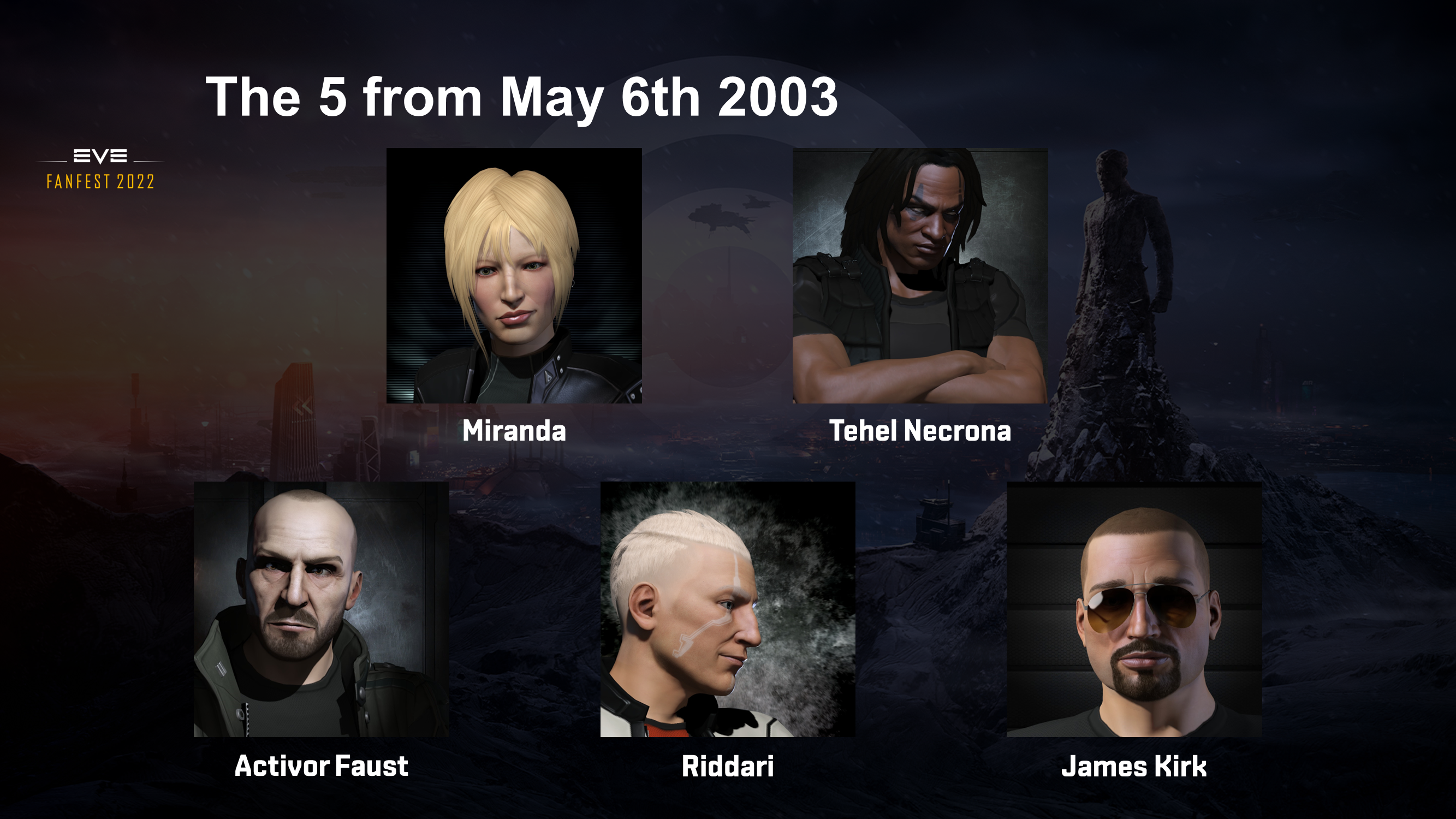 Next we have a similar graph as the scatter above, except we’re only including data from FF22 attendees, and the axis has also been flipped to show a different view. Each star shown in this chart represents a player at Fanfest – not just a character – and the size of each star represents the number of characters owned by that player. 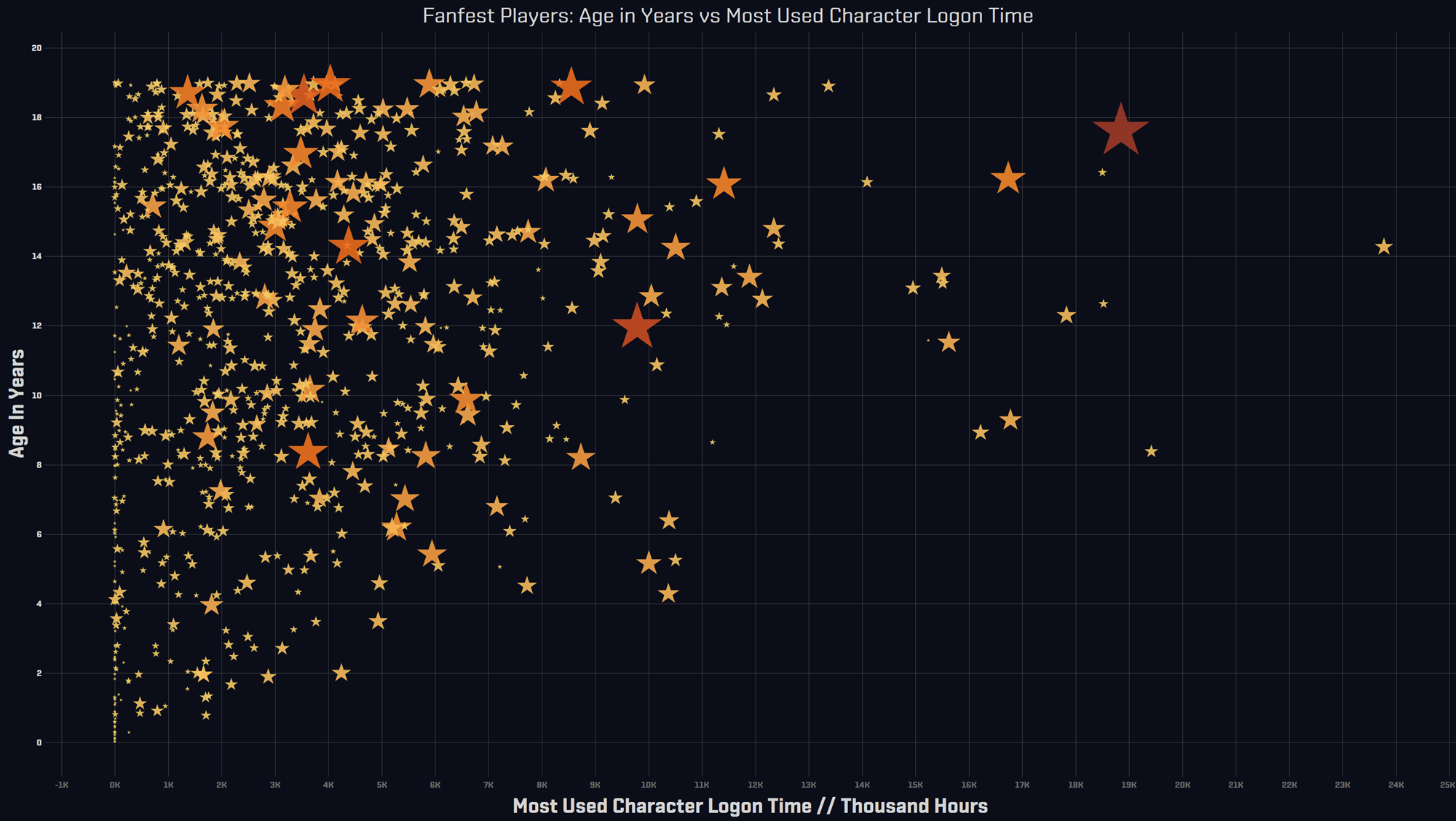 By taking a few examples from this, we see the remarkable differences between EVE players. Some have been playing EVE for many years, while others are just starting out. Most players have been quite active in terms of hours, but the differences are still massive. And some choose to play only on a few or even a single character, while others have put together a small army. 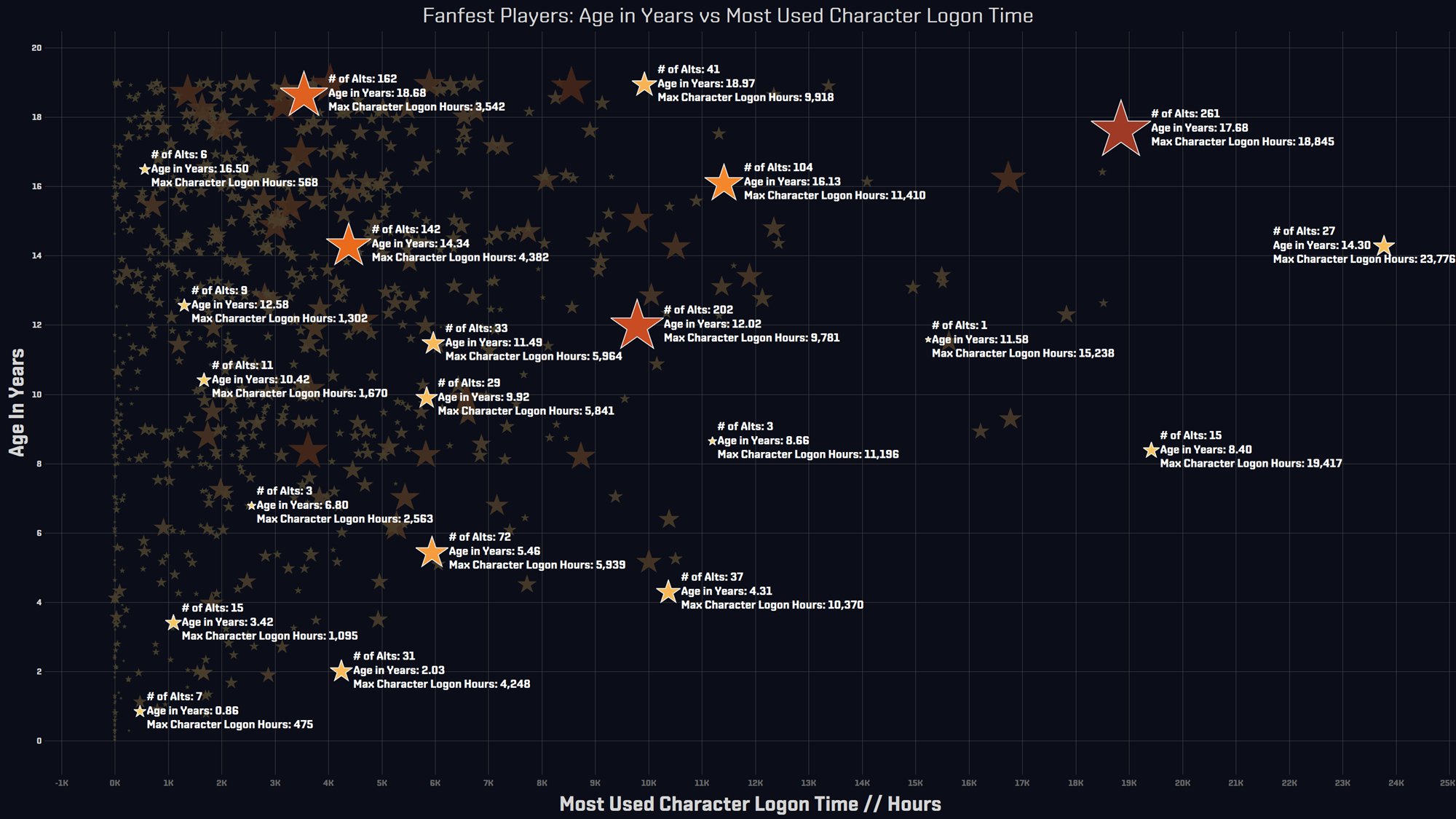 These visualizations from Fanfest are the tip of the iceberg in terms of the data that lets us keep up with EVE players every day. You always manage to keep us on our toes and we love seeing the impact you have in the EVE universe. The nearly 20 year legacy you’ve left in New Eden is truly something to behold.

We look forward to seeing what you do in the future as we inch closer to the 20th birthday and the third decade of EVE Online. We’re excited to show you more like this in the future but if you want to see more cool EVE data in the meantime, check out the June Monthly Economic Report.

That’s all for now! We’ll see you on CCP TV this Thursday at 14:00 UTC for a chat with CCP Bjorn.