In the early hours of 27 January 2014, a chain of events was set in motion that caused what is arguably the largest single player vs. player combat engagement in the history of online gaming.

A 21-hour-long engagement ensued, which became known as The Bloodbath of B-R5RB. This fight, along with the attempted interdiction of reinforcements on the way to the system, resulted in the destruction of 75 titans, 13 supercarriers, 370 dreadnaughts and 123 carriers, totalling an estimated value of a little over 11,000,000,000,000 (11 trillion) ISK, eclipsing the Battle of Asakai as the largest and most costly single engagement in the history on EVE Online. 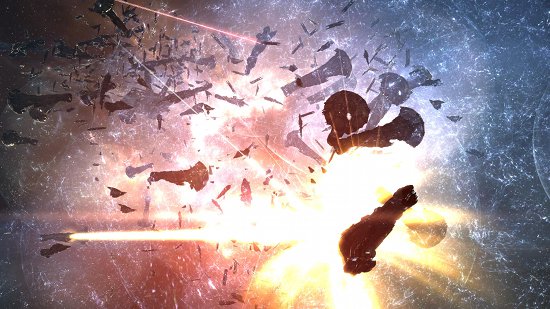 The Bloodbath of B-R5RB became the most costly and destructive engagement in the history of EVE Online. 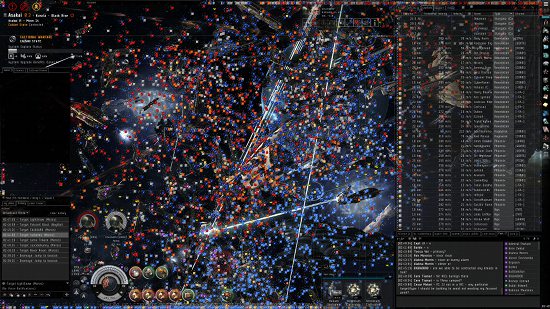 The Battle of Asakai is regarded as one of the most prolonged and savage capital ship battles in the history of EVE Online, coincidentally happening one year to the day before B-R5RB.

In fact, The Bloodbath of B-R5RB was so large that CCP commemorated the sheer level of destruction with a permanent in-game monument to the player-created carnage, aptly named “Titanomachy”. 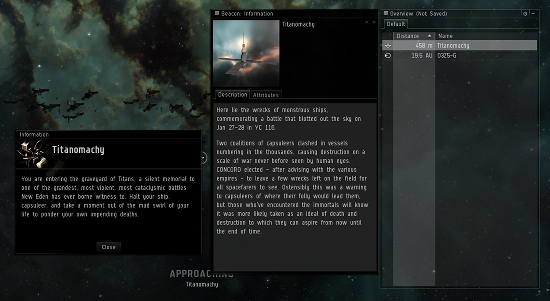 Naturally, the record for the largest and most costly single engagement in EVE history was expected to stand for some time.

In fact, B-R5RB’s record was shattered a little over two months later by players on EVE Online’s other game server, Serenity, which hosts Chinese players and is operated by CCP partner TianCity. 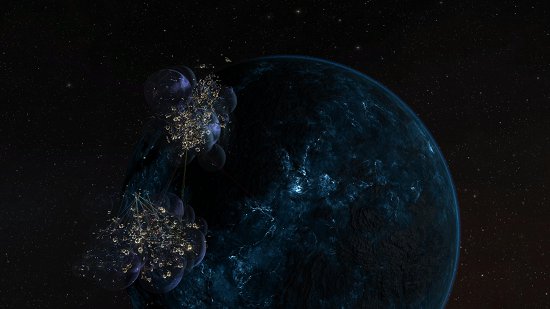 The two fleets form up and begin the engagement in orbit of 49-U6U II.
(Image courtesy of Rooks & Kings)

Behind every large-scale conflict in EVE lies a group of alliances and coalitions that lock horns over everything from territorial disputes to resource control — and sometimes just plain old-fashioned grudges.

In this instance, the enormous battle in 49-U6U began in the north over a territorial dispute between two of the largest alliances on Serenity, which in turn became an enormous war between two sizable coalitions: PIBC and RACOA/FDK.

Pan-Intergalactic Business Community:
Consisting of over 25,000 members and also known as PIBC, this group is Serenity’s biggest and oldest alliance. They own most of the western side of nullsec, including the sought after regions of Delve, Querious and Fountain, along with Outer Ring and Period Basis. After recent events, they also have a strong foothold in the north, with control over Tenal, Tribute, Vale of the Silent, Geminate and part of both The Kalevala Expanse and Etherium Reach.

VENI VIDI VICI:
Usually known as 3V, this group used to be a pure pirate alliance but have since evolved into a strong ally and mercenary contractor for PIBC which bolsters the coalition’s fleet strength significantly. The close ties between these two alliances are thought to be linked to the close out-of-game ties between their leaders, who both live in the city of Chengdu, in southwest China.

R.A.C:
Serenity’s second-largest alliance, totalling some 20,000 players, this group was part of PIBC until September 2008. An economic dispute over the Stain region saw a large number of PIBC secede and form R.A.C., which now controls the entire south of Serenity’s map, including Stain, Impass, Tenerifis, Detorid, Esoteria, Feythabolis, Omist and Paragon Soul.

City Of Angels:
Also known as COA, and sporting a member count of over 10,000, this is the sister alliance of R.A.C and Serenity’s fifth-largest alliance. It holds sovereignty over Providence, Immensea, Wicked Creek, Catch, Curse and Scalding Pass, and secures R.A.C.’s access to a number of chokepoints into empire space.

FOF:
A relatively recently formed alliance made up of ex-PIBC rebels. Many of the corporations in this group used to be part of PIBC in Fountain, and it is said that their leader has personal dissatisfaction with leader of PIBC, which caused them to splinter from the main alliance.

July Alliance:
July Alliance wasn’t involved in the 49-U6U epic battle, but they do remain part of the story and no longer exist now since their defeat and disbandment in January 2014. JA were at one point a subordinate alliance of PIBC and held sovereignty over Tribute, Branch and Tenal.

You can see more of the current sovereignty layout on Serenity via Verite’s influence map for the Chinese cluster here. 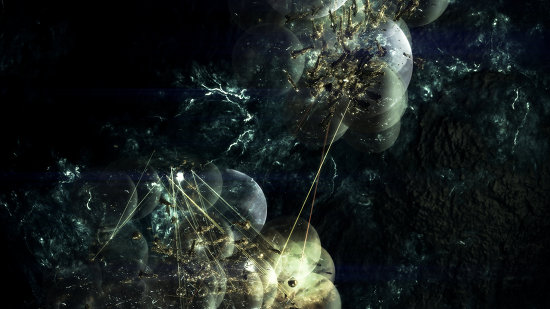 The Road to the Slaughterhouse

The region of Tribute is an important hub for the north on Serenity. 3V has been holding control over the area under the sovereignty of PIBC (including the highly prized chokepoint systems of M-OEE8 and P3EN-E) since 2009. Both FDK and July Alliance, who were friendly at the time, attempted to negotiate with PIBC, asking for a takeover of the region to secure their remote territories and were denied access.

PIBC at that time showed more love toward 3V, which might be explained by the aforementioned close-out of game links between their leaders.

Meanwhile, an audio recording was leaked among player communities, in which 军用馒头 (literal translation “military steamed bun” – don’t ask!), the executor of PIBC, expressed his vision for Tribute to be a blockade that would prevent any northern alliances from further development without the express consent of PIBC.

When FDK and July Alliance realized that PIBC was no longer an ally and was controlling their development, they began to attack 3V for control of Tribute. The situation was initially promising, and the aggressors appeared to have the upper hand. This quickly went south, however, after PIBC decided to intervene, levelling the opposition. As a result, when they lost the war, July Alliance was disbanded and FDK began rapidly losing their foothold in Tribute to PIBC as they retook the space lost.

During the conflict in Tribute, Fadeklein Alliance realized that it would never be possible to take down PIBC alone, and that no single alliance on Serenity could match their fleet strength or go toe-to-toe with them in combat.

They subsequently formed a coalition with R.A.C., City of Angels and FOF in order to “fight together against PIBC and prevent Serenity from becoming one man’s game”.

PIBC was compelled to withdraw from the northern regions to protect their homeland in the south. During the night of 28 February, when 400 super-capitals were cynoed (moved) into the system of 49-U6U in Querious by RACOA/FDK coalition, PIBC realized that their adversaries couldn’t be more determined. The war was turning from an invasion into a game of survival for themselves, in which they were now outnumbered by their aggressors.

At roughly 07:00 China Standard Time (CST) on 25 March, PIBC cynoed a fleet heavy with supercapitals into 49-U6U in Querious, with the intent of destroying R.A.C.’s un-reinforced Infrastructure Hub. RACOA/FDK responded by bringing their capital fleet in to defend the structure. 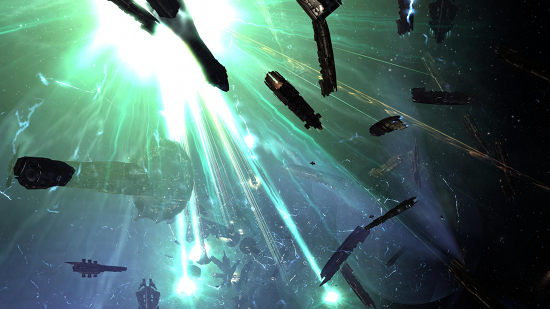 From the perspective of Pan-Intergalactic Business Community, the system represented a chokepoint into 4-07MU in Catch, which was held by hostiles R.A.C. Securing this system would prevent cyno access to PIBC territory from Catch.

In the eyes of RACOA/FDK, sending supercapitals into 49-U6U would put them into a position to strike at a number of PIBC systems within their cyno range. They even went to the lengths of constructing an outpost in the system to show their determination to make the war as long and painful as possible for PIBC. For RACOA/FDK, losing control of the system would be devastating to both their future strategy for attack, and to the morale of the coalition. 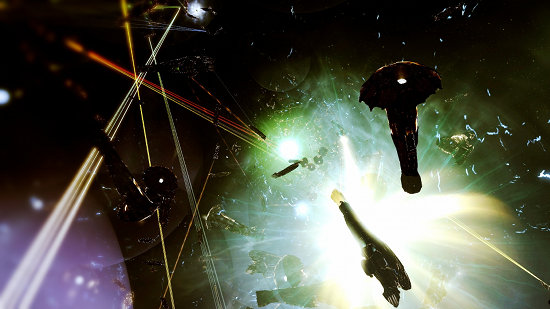 The Slaughterhouse In Numbers

In terms of sheer numbers, this engagement tips the scale as the largest and most costly in the history of EVE.

With the bar set at 11 trillion ISK in damages during the battle of B-R5RB on Tranquility in January, Serenity went ahead and smashed that record, almost doubling the ISK value of hulls destroyed at an astonishing 26 trillion ISK worth of damage.

The engagement also lasted slightly longer, a total of 23 hours, from 07:00 through to 06:00 CST, and was only halted when the server was taken offline for the scheduled deployment of EVE: Rubicon to Serenity.

We can see from the graphs above that the vast majority of these costs constitute the price of Titan hulls, which due to the differences in markets are valued at roughly ISK 250bn each on Serenity. A total of 84 Titans were destroyed, nine more than in B-R5RB.

This number is followed by Dreadnaughts, of which a total of 824 were destroyed, valued at roughly 7bn per hull. The trend continues with Carriers — a total of 118 destroyed at 3bn per hull — and 39 Supercarriers at 50bn per unit.

Before this engagement, there had been approximately 30 Titan kills on Serenity. This single battle quadrupled that number to more than 100 when the dust finally settled.

For a more direct comparison of the scale of the losses, the above graph shows confirmed kills by capital ship class in both 4A-U6U and B-R5RB.

Breaking down the Titan losses by race shows that armor-based fleet compositions were the most popular across both clusters. The Erebus-class Titan was the most utilized Titan of the four, followed by the Amarrian Avatar class. 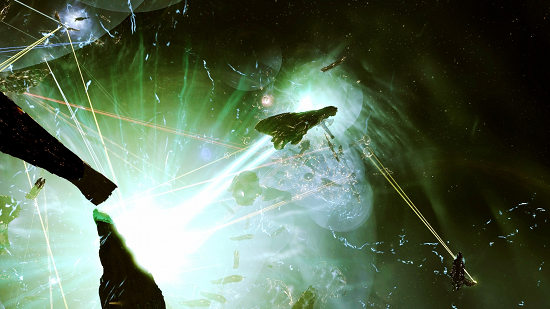 The engagement in 49-U6U saw the largest deployment of capital ships in the history of EVE Online.
(Image courtesy of Rooks & Kings)

A breakdown of losses across both engagements shows Serenity players’ preference for Dreadnaughts, and their use of more Supercarriers versus smaller Carrier class hulls. That’s a potential indicator for why the market value of Carriers remains so low compared to Dreadnaughts, at roughly 3bn and 7bn per hull respectively.

A comparison of player participation shows that while Tranquility had more unique characters involved in the engagement in B-R5RB, players on Serenity managed to cram almost 400 more players into the system of 49-U6U at the peak of the battle for an engagement that lasted two hours longer. 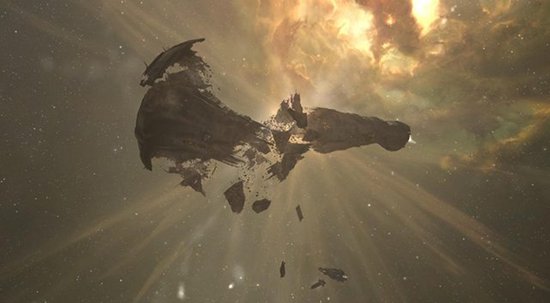 While the crown for the largest fleet fight in the history of EVE still resides firmly on Tranquility (the battle of 6VDT-H saw a peak of 4,070 pilots gathered in one system), there is no doubt that an engagement of this size will send shockwaves through the political and economic landscape of Serenity.

The battle is of such significance that our partners at TianCity, who operate EVE China and manage the Serenity cluster, have already declared their intention to add an in-game monument along the lines of Titanomachy in 49-U6U to honor the epic size of the engagement.

Massive congratulations to both sides involved in the conflict for the battle itself, as well as the months leading up to it. The same level of diplomacy, logistics, grit, imagination, and determination that have been proven to set EVE’s Tranquility players apart from other gamers also exists in full on the Serenity server. Spaceships are blowing up the world over and it is glorious.

Going forward, we’ll be sure to highlight further information about Serenity and prominent events that occur there, and of course bring you pretty images of the monument being placed in honor of this 23-hour-long slugfest.