The Massacre at M2-XFE | EVE Online

A Clash of Titans

The largest war in EVE (and video game) history had been raging for months and tensions were building. The two sides of the conflict each possessed the largest supercapital forces in New Eden and a large scale confrontation felt inevitable as the battle lines pushed closer, the fighting grew bloodier, and each battle became more critical to each side's success, survival or morale.

On December 30th 2020 this tension finally came to a spectacular head in the most destructive battle New Eden had ever seen. As PAPI forces were continuing to press into the Imperium home region of Delve they began an assault against a seemingly "irrelevant" (1, 2) Keepstar in the system of M2-XFE. PAPI cleared the shield timer without much contest however when it came time for the armor timer, the Imperium supercapital fleet was poised to respond.

A lone Imperium interceptor pilot is credited with attacking the M2-XFE cyno jammer just prior to the start of the fight, granting the imperium forces a window in which they could bring in capital reinforcements while the cyno jammer repaired. The cyno jammer was then hit several more times by a small number of imperium pilots to keep the window open as they brought in additional reinforcements - however the attackers too were bringing in additional ships, as both sides attempted to achieve a numerical (and firepower) advantage.

At 22:33 GMT the PAPI forces moved into position below the Keepstar and all waited nervously to see if the Imperium forces would break from the safety of the Keepstar tether to engage. As the first shots were fired by PAPI at the structure, the Imperium broke from tether and returned fire - the resulting fight would be the most destructive in EVE History.

The fighting lasted approximately 14 hours as each side volleyed Titans and enemy supercapitals off field, one after another. The trades on both sides were incredibly even, with each side losing supercapital ships at around the same rate. The bloodbath continued until daily downtime the next day, when PAPI forces were issued the command to stay logged out after the servers went offline. As the dust settled, New Eden was left to tally a larger battle than had ever been seen before amidst a mountain of shattered titans.

(Yes, all of these pictures are actual in-game captures of the fight)

USD Value of Losses: $378,012
Based on the average sale value of PLEX. This number is simply given as a way to represent the effort-value of the destruction and not an actual amount of money spent by participants on this fight.

Amidst the wreckage, a monument is being constructed in M2-XFE. 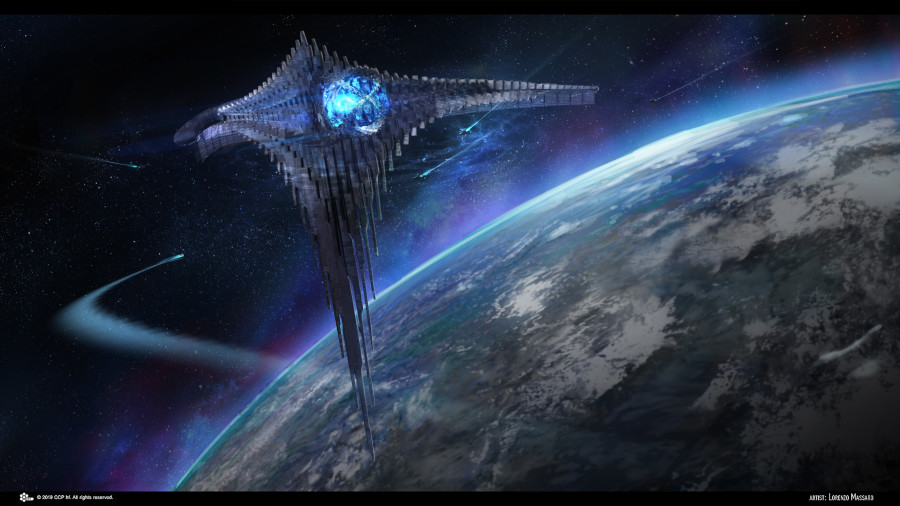 From the Designer: The initial concept was very clear in my mind: a diorama inside a semicircle with ships ready for the battle on its two opposite sides, and a banner in the middle bearing the records of all the players involved in the fight. I wanted something majestic and imposing to represent the epic scale of the battle. I was greatly inspired by the architectural rhythm of Hallgrimskirkja for the main structure. My team suggested implementing the shape of the Keepstar in the design; from that point I tried to include that shape as single piece or in a pattern in multiple ways. Once I found a solid shape for the main structure, I tried to merge with it some of the other previous experiments where I had used the shape of the Keepstar as a base until I ended up with a semicircular monument with the shape of the Keepstar inside of it.


M2 By The Numbers

The numbers involved in this battle may not mean much to you in a vacuum, so we've gone through the most destructive battles in EVE history, some of which you may be familiar with including the now unseated 'Bloodbath of B-R', to help provide a sense of scale. 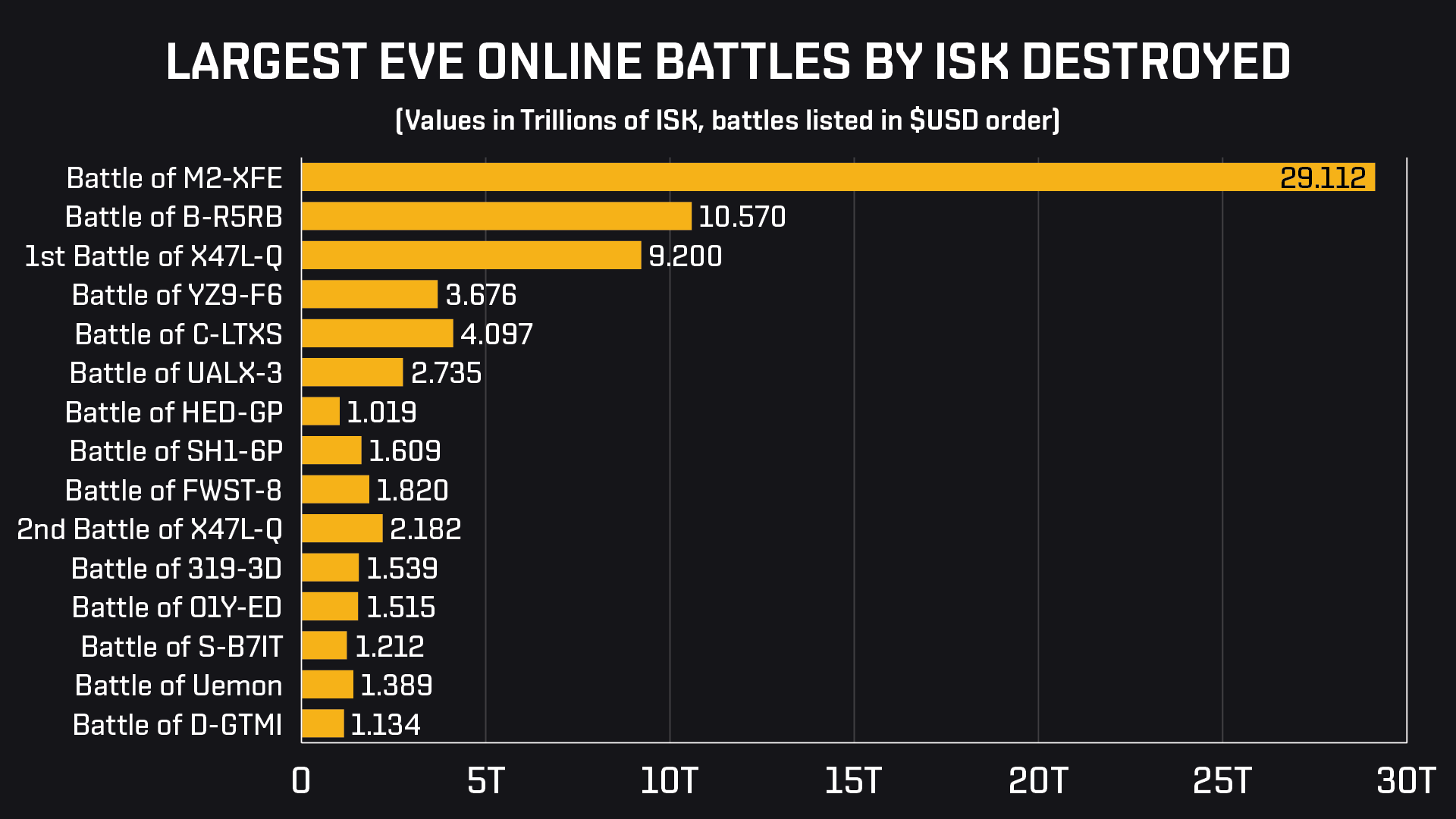 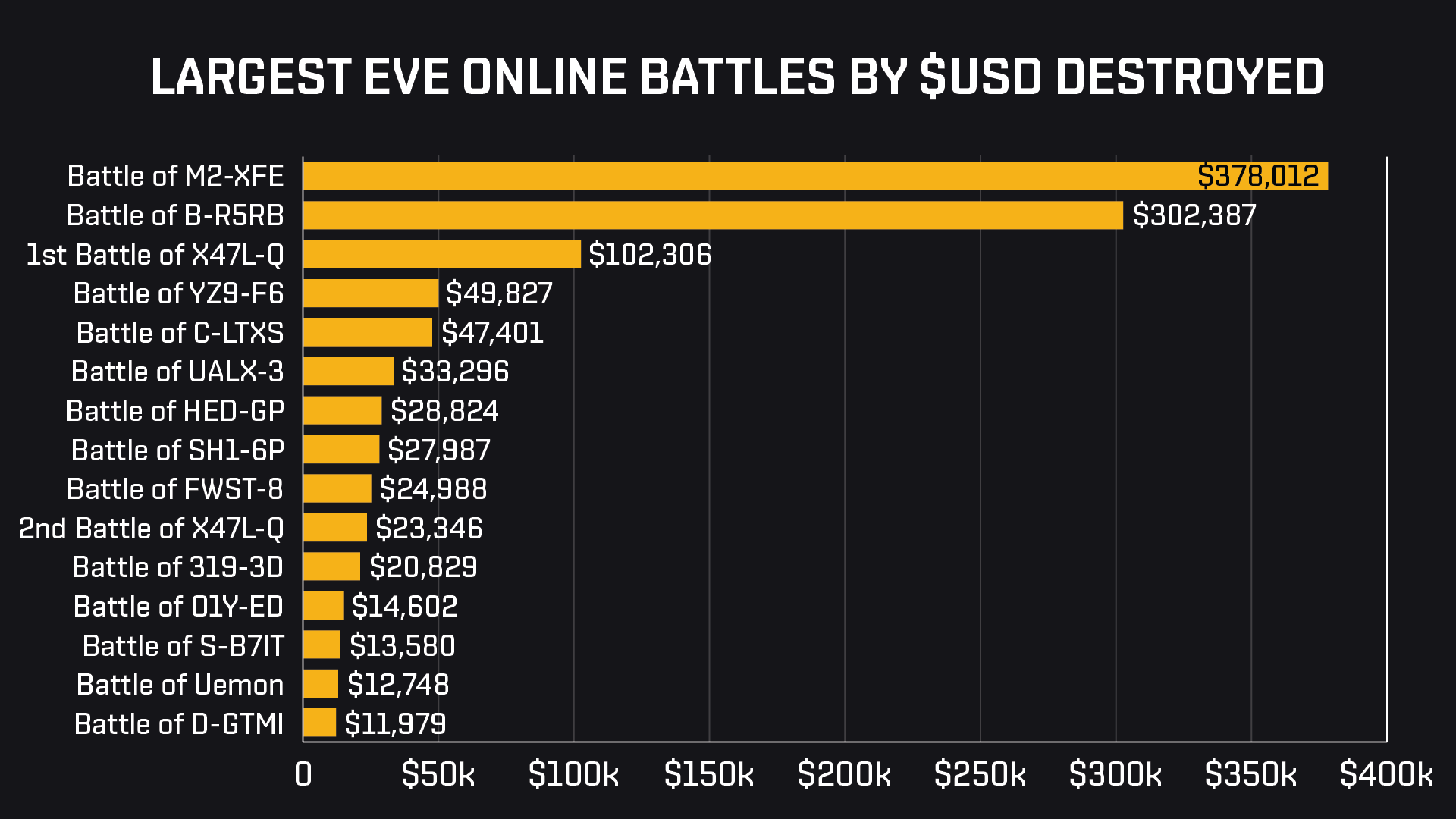 The numbers shown in this chart are not exact amounts spent by players on this battle (as much of these fleets were paid for in thousands of man hours of in-game work) but an equivalent value had they attempted to buy all the ships and equipment used in the fight out of pocket via PLEX (and bear in mind, this is just what was destroyed!). The USD value is calculated using the average value of PLEX purchases at that time and the average ISK market price of PLEX.

Interestingly, you can get an idea of how the value of ISK has changed over time, particularly looking at the differences in B-R (2014), between the ISK and USD graphs. 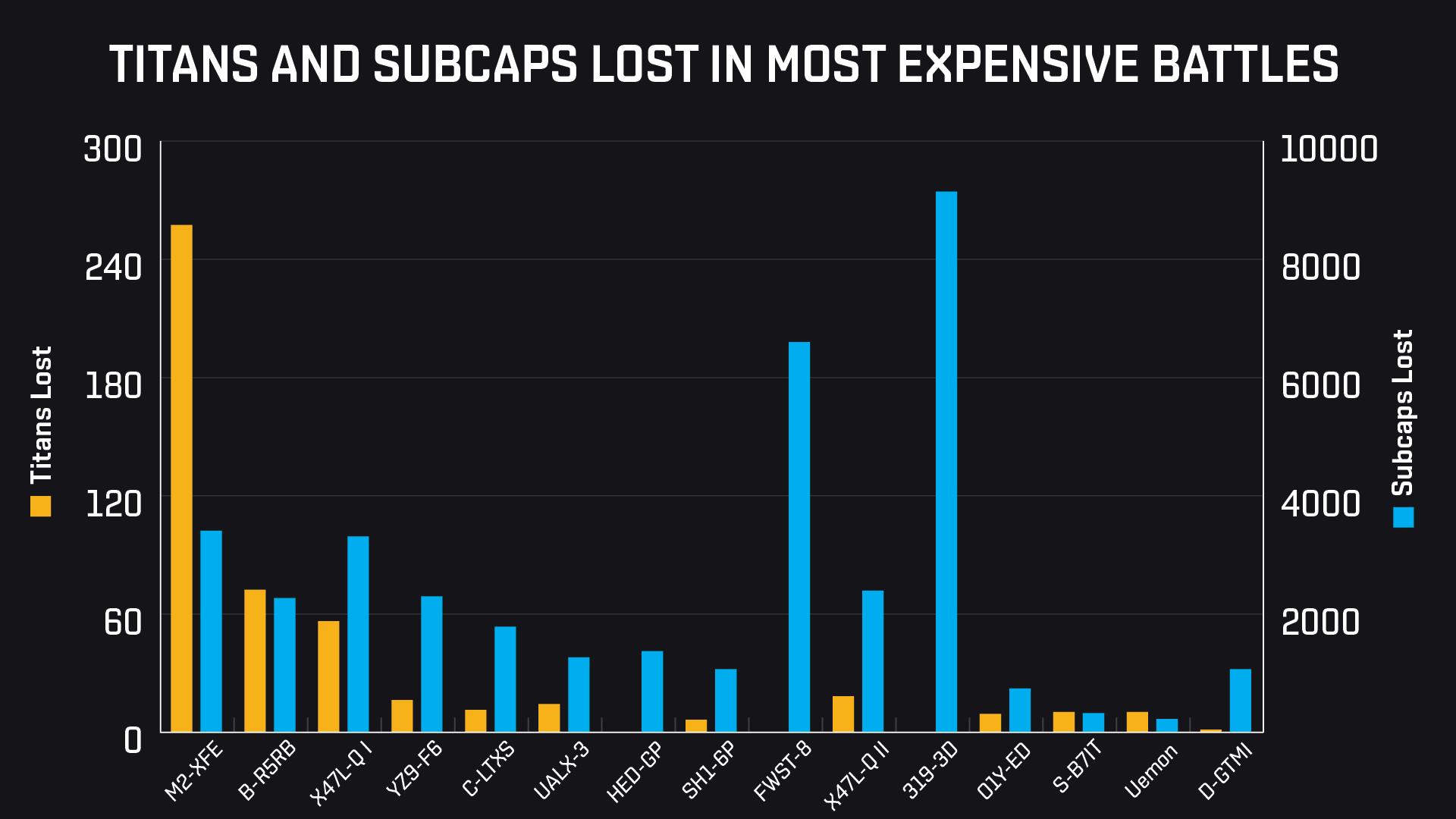 Of the 1,304 Titans that participated in this fight in M2-XFE an incredible 257 of them were destroyed - which amounts to nearly 20%. 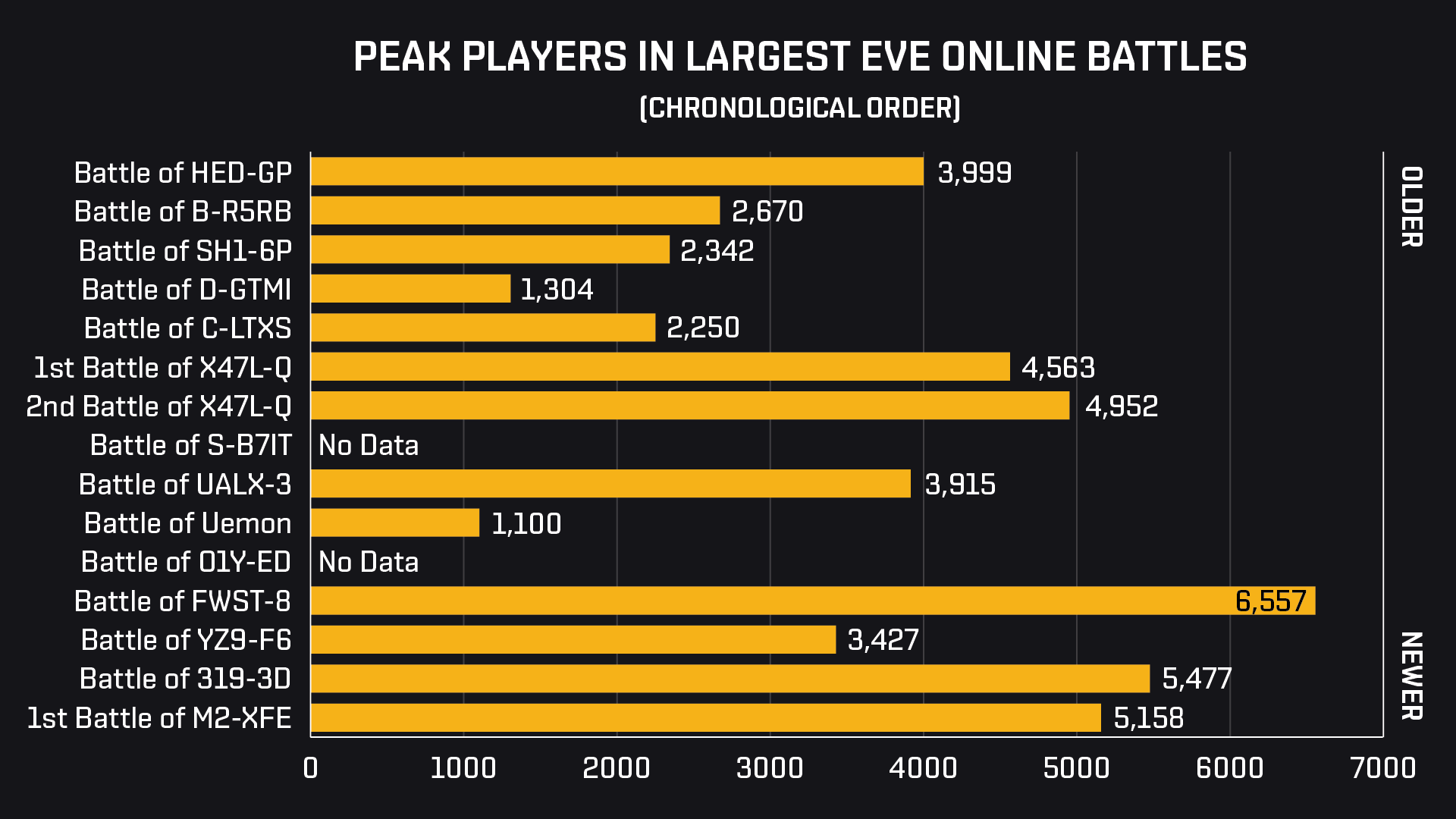 Battles in EVE Online have grown steadily with time, from HED-GP and B-R back in 2014 (only a few days apart) to today. While the battle didn't quite break the record set by FWST for max players in a single battle, it certainly took its place among the top. Bear in mind that this graph is showing only those top battles in terms of destructive value.

For some of the following data we supplemented our numbers with data from our partner, Zkillboard. While this data is less 'official' it is reliably accurate with only the potential of kills not appearing if ESI data was not provided, so the numbers may slightly underrepresent reality - however all 257 titan kills are accounted for. 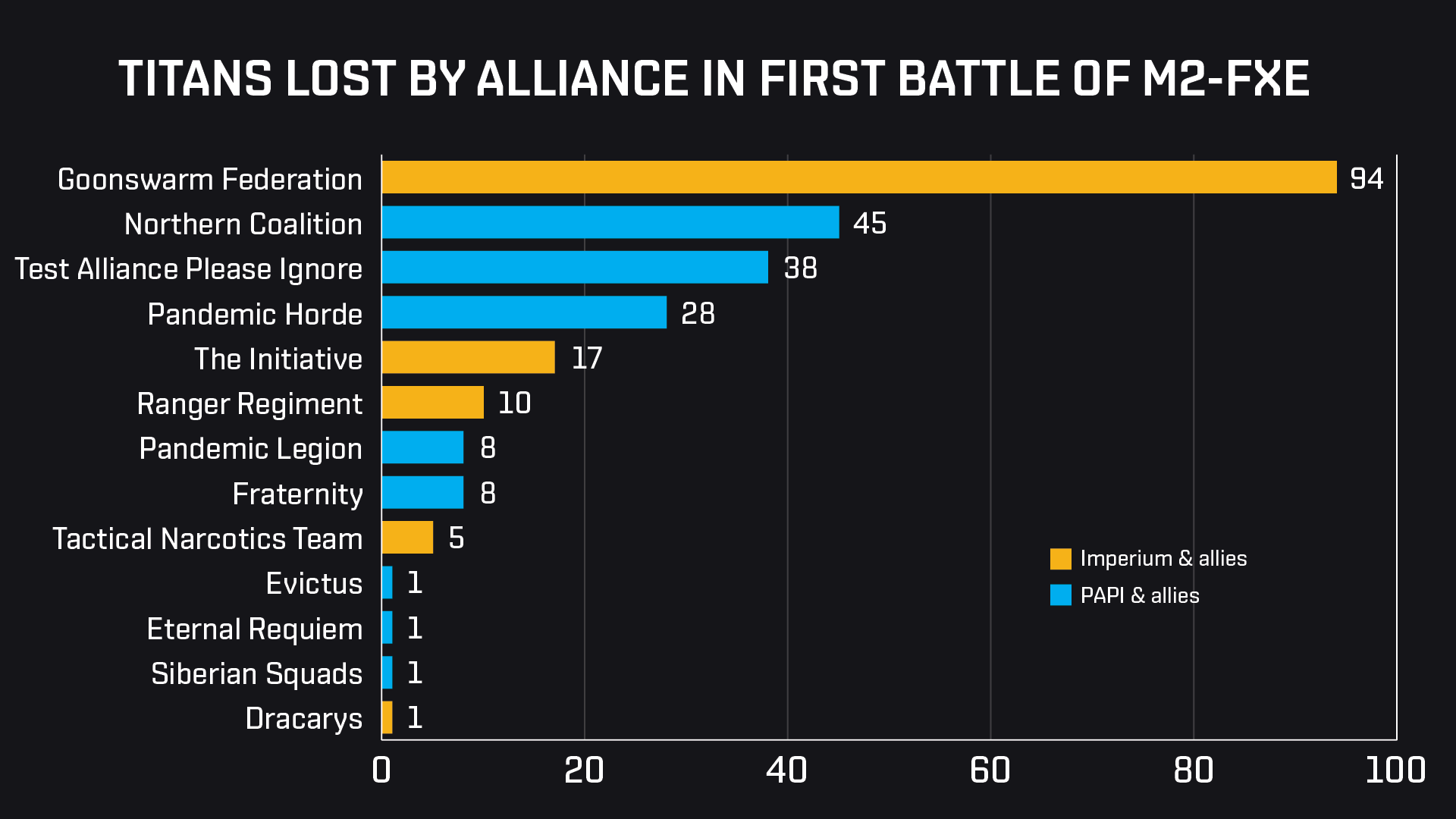 When it comes to Titan losses, this battle did not have a clear-cut winner. PAPI forces lost a combined 130 Titans while the Imperium lost 122, giving them a narrow 8-Titan lead over the attackers. 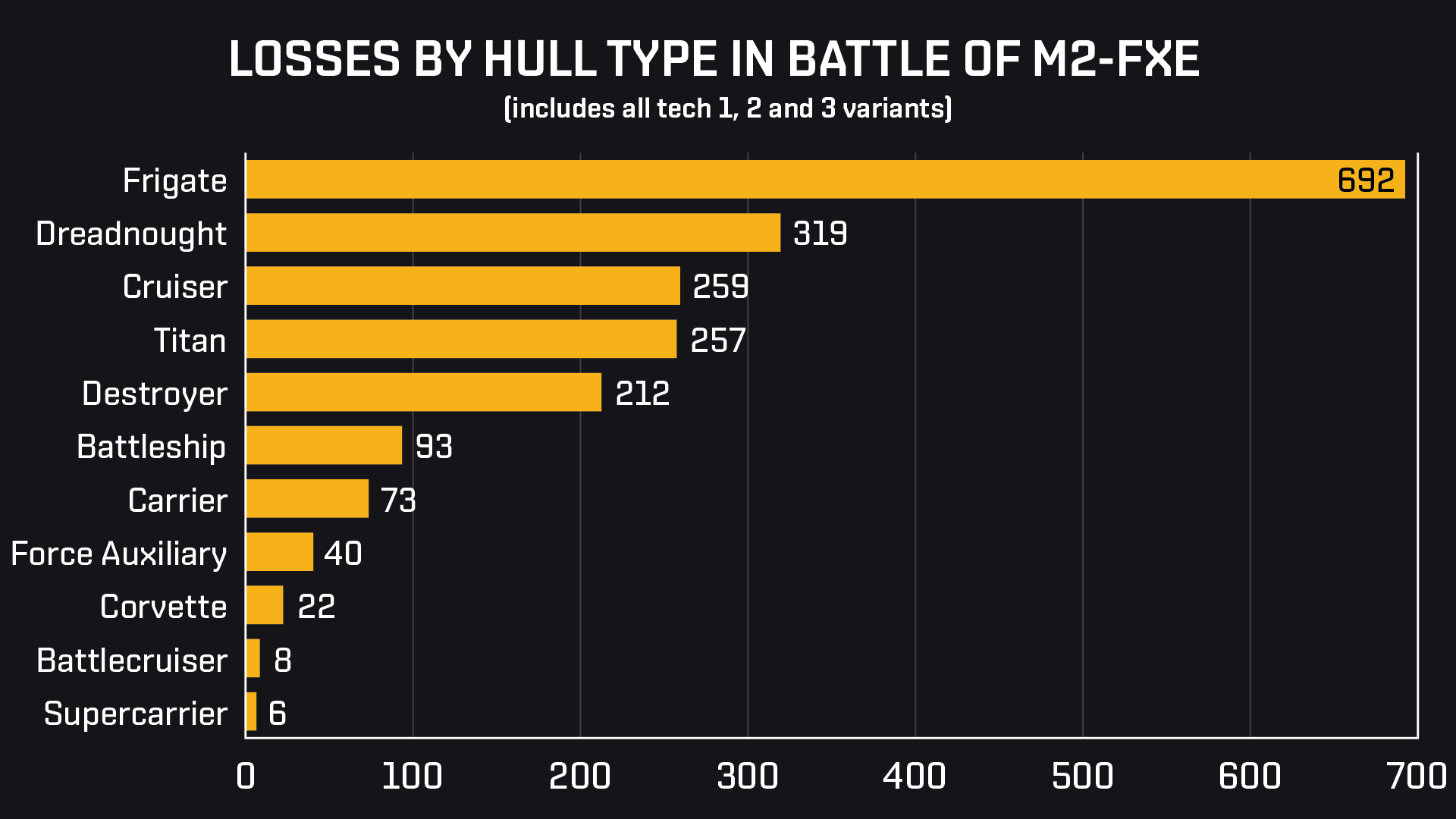 While the Titans tend to take the spotlight due to their size, power, and value - they were not the only ships fielded. Over a thousand players in subcapital ships also played a part.

If you'd like to browse the destruction for yourself, you can find more detail in this Battle Report.

Okay, so just how big was this battle really?

Let's forget about ISK and dollars for a moment and just talk about what a Titan is in the universe of EVE Online. Titans are MASSIVE weapons - but just how massive? 2,400,000,000kg to be specific (the mass of the Avatar). That's 2,645,547 US tons - the equivalent of over 7 Empire State Buildings (src) and nearly 14km in length (8.5 miles). A single titan is enough to scar a planet, should the planet be so unfortunate as to collide with one.

Mass of the Titan Wreckage: 591,100,000,000kg enough to be a dangerously large asteroid. Slightly more massive than 4769 Castalia, a potentially hazardous near-earth object. We can be thankful the wreckage is being salvaged for use in the monument and isn't at risk of careening towards any populated planets.

Approximate mass of all 1304 titans which were present: 2,999,200,000,000kg Just a bit more massive than the minor planet 1566 Icarus - a potentially hazardous near earth object which sparked a project at MIT to consider how to defend the earth from a potential impact, should it be found to be on a collision course (the final plan was to use 6 100-megaton nuclear warheads and pray that solved the problem).

Length of the Titans end to end: (assuming an average titan length of 15.75km) 20,538km - approximately half the circumference of the earth and nearly twice the diameter. In terms of raw scale, this was truly a massive battle. The pictures you see here showing fields of titans may be hundreds or thousands of kilometers across!

And these are just some fun fact about the size and mass, not even touching on the mind-blowing scale of capital weapons. The total firepower brought to bear in this fight was truly earthshattering - a very rough estimate of the total energy released of all the doomsdays firing simultaneously is equivalent to that of a small star (estimate based on the Nuclear L charge mass, damage and a comparison to modern nuclear weapons yields): Over 100 billion terajoules of energy - and yes, there are many other ways to estimate this and get very different numbers.

The war continues to rage in nullsec and the story has continued on since this battle, including PAPI forces finding themselves trapped and their daring escape from the Imperium 'hellcamp'. We are happy to celebrate the incredible achievements and historic events of this chapter of EVE's history and, as always, look forward to seeing where the epic tales you weave will take us next.

"This was a bare hands, bloody knuckle fight over a backwater keepstar in a system that didn't matter, and it turned into one of the most consequential fights in the history of EVE, lasting 14+ hours and seeing more Titans die than every other major Titan brawl put together. It was amazing to be there, to cover the entire fight from start to finish live on stream... even if it did cost me a Titan." - Brisc Rubal, The Imperium

"This battle is a bit like a poker game where both players stockpiled weapons for several years and then went all-in. One side started escalating the fight to the absolute maximum of their resources, and the other matched in full; not just in terms of manpower but also in the value of assets committed. It is rare in EVE to see so much at stake in a single fight as the losses can undo years of effort from thousands of participating players. However, in this rare instance it did indeed happen, causing the biggest fight we have ever seen, both for the numbers of players involved and the amount of assets destroyed. Really remarkable." - Gobbins, PAPI

Media & Community Articles About the Battle

INN - EVE of Destruction: The Titan Massacre at M2-XFE

Alpha Orbital - Graveyard of Titans - The Massacre at M2-XFE