EVE Online and New Eden are powering towards Fanfest 2022, and the latest round of exciting updates mentioned in the Road to Fanfest – Ever Closer blog are now live in-game, with some bonus additions based on player feedback! Structure updates that introduce more ship variety in combat, balance changes to the Rorqual, stealth bombers, Proteus, a revamp of daily login bonuses - and more - make up the latest volley in a string of updates leading up to and beyond EVE Fanfest 2022. 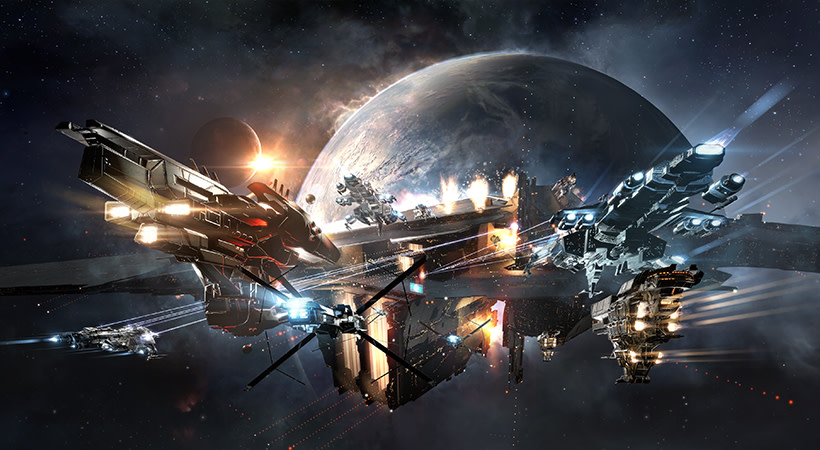 There have been many changes to Upwell structures since their launch in 2016, and in order to create more exciting gameplay around attacking and defending them, the updates that target the balancing of fighting in and around them are live now.

The Standup Point Defense Battery will soon require it to use ammunition loaded into the module, as well as giving it a longer reload time. This will create downtime for the Point Defense Battery so that there are windows for counterplay where small ships can drop into a fight and warp off before it’s reloaded and ready to fire again.

In addition, the volume of the new ammo has been reduced from 5m3/round down to 1m3/round. The blueprints for the ammo are now live in-game, as is the reduction in damage the Point Defense Battery can put out (making it more useful for clearing interdiction bubbles than entire fleets of smaller ships). The longer reload time and ammo loading requirement will be implemented a little bit later in order to allow you time to build the required ammo.

The Standup Guided Bomb Launcher now holds fewer bombs and takes longer to reload the launcher when all bombs are spent. This will create windows where bomb use is more tactical and not the primary defensive weapon a structure has in its arsenal.

Standup Arcing Vorton Projectors have had their ability to target subcapital ships removed. As a result, they now cannot be used purely to headshot enemy fleet commanders as well as further reinforcing their purpose as anti-capital defense. 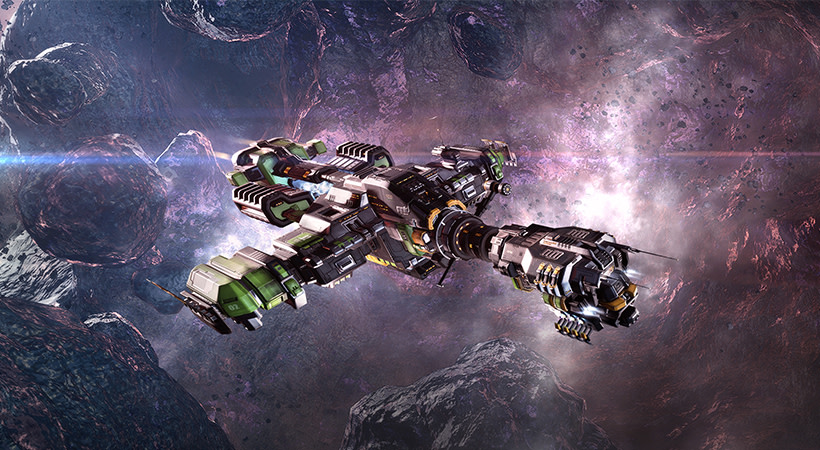 The new Industrial Jump Portal Generator I module for the Rorqual is also now live in-client, providing it with a new and powerful maneuverability & logistics tool. Mining operations across Nullsec and Lowsec will transform as Rorquals can now conduit jump 30 mining ships next to them, allowing for better logistics for large-scale mining operations. In addition, taking note of your feedback that the perspective purpose of the Porpoise is central to mining fleets, it can now join the conduit jump as part of the Rorqual’s mining fleet!

Combined with unparalleled boosts and compression, along with the already powerful PANIC modules – and the fact that it will be able to jump to industrial cynos - the Rorqual cements itself as the most powerful mining support ship New Eden has ever seen.

POWER TO THE PROTEUS 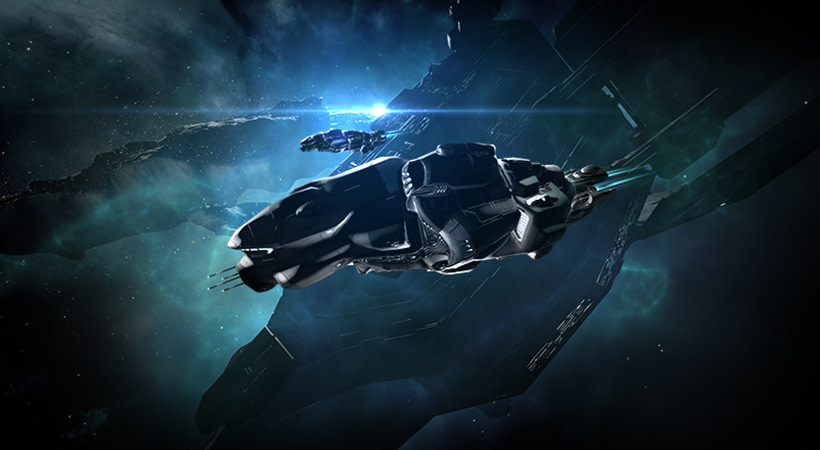 Since the Bolstered Bulkheads resistance buff placed a spotlight on Tech III cruisers, changes have been made to the once-strong-but-recently-underperforming and popular Proteus to bring it more in line with other ships in the range. Its potential has been further unlocked through an easing up of its fitting space to allow the Proteus to more comfortably fit a 1600mm plate alongside a full rack of neutron blasters without necessitating spending a valuable low slot or rig on a fitting module. The plate mass change also gives it a slight speed boost to make it a bit more mobile while armor plates are fitted, making it just slightly easier to get into a position to use those blasters effectively.

In addition, and again with your feedback in mind, the Proteus’ Drone Synthesis Projector offensive subsystem has had its CPU output increased to 60tf and its drone bandwidth increased to 125Mbit/sec, meaning it can now field 5 heavy drones at once. Its drone bay has also had its capacity increased to 300m3. This allows the Proteus to compete more effectively with other similar cruiser options for its cost. Don’t forget, there is no longer any skill level loss when you lose your Tech III cruiser!

To celebrate these updates to the Proteus, the Inner Zone Vanguard SKIN is returning to the New Eden Store with a 25% discount, and you can also get the Skyliner and Serpentis SKINs for the Proteus at 25% off, too! Act fast as these SKINs will only be discounted until 12 April, giving you enough time to buy or dust off your Proteus, give it a fierce look, and return it to glory! 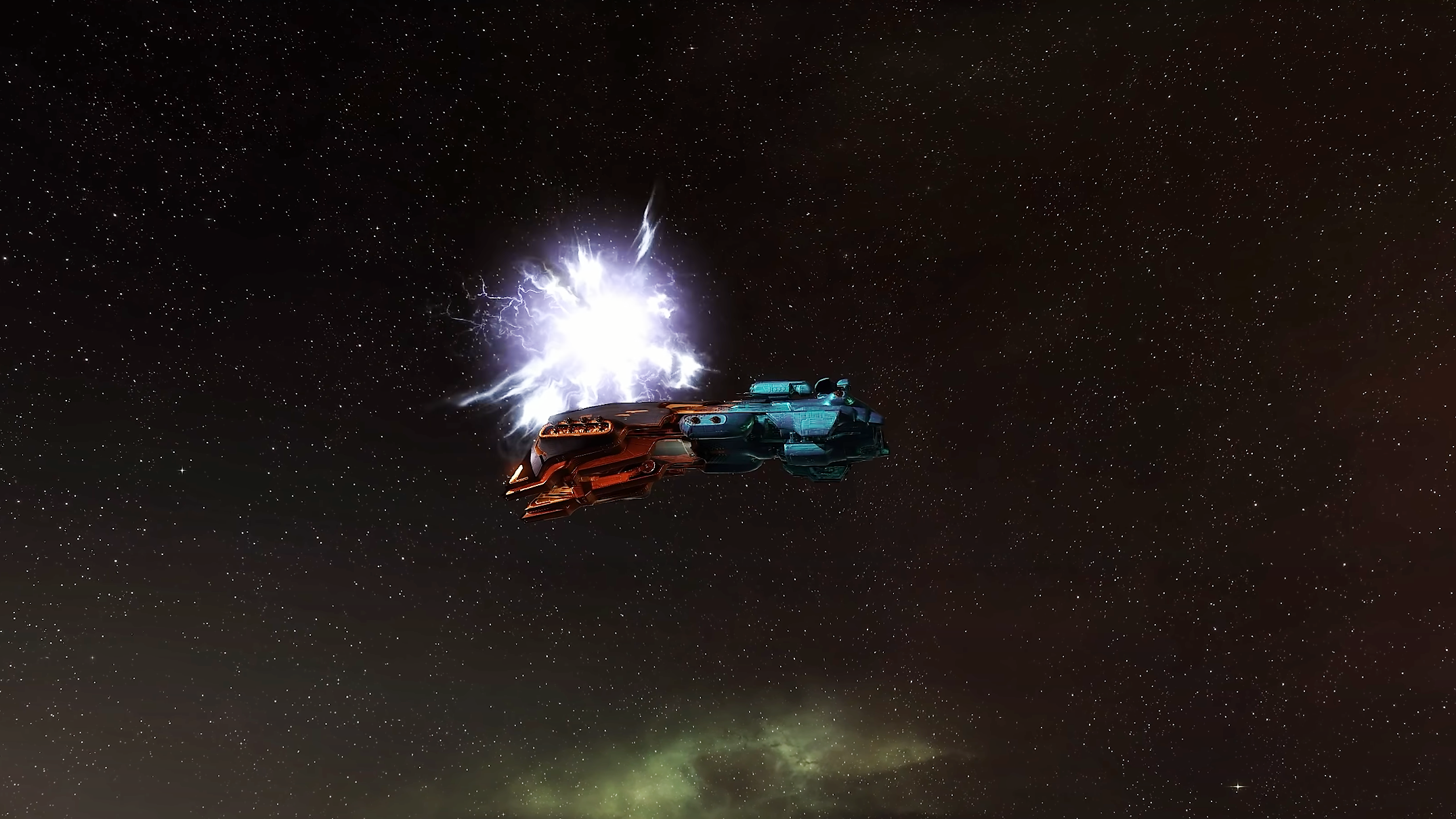 Historically in EVE, organized groups of stealth bombers have always contributed interesting counterplay to battleships - all while showing off the very high skill cap that a well-orchestrated bombing run requires. So, as groups are building their battleship reserves, an issue fix here has increased the strength of stealth bombers as they receive a cooldown reduction for bomb launchers, meaning that they can come back for a second bombing run more rapidly.  With the Bomb Deployment skill trained to level 5, a Tech II bomber can launch a bomb every 67 seconds instead of 120.  A Tech I bomb launcher will have a reactivation delay of 80 seconds, down from 144. Small adjustments will continue to be made as the meta unfolds to ensure that one playstyle doesn’t become too dominant, and players can continue to enjoy more options and diversity. 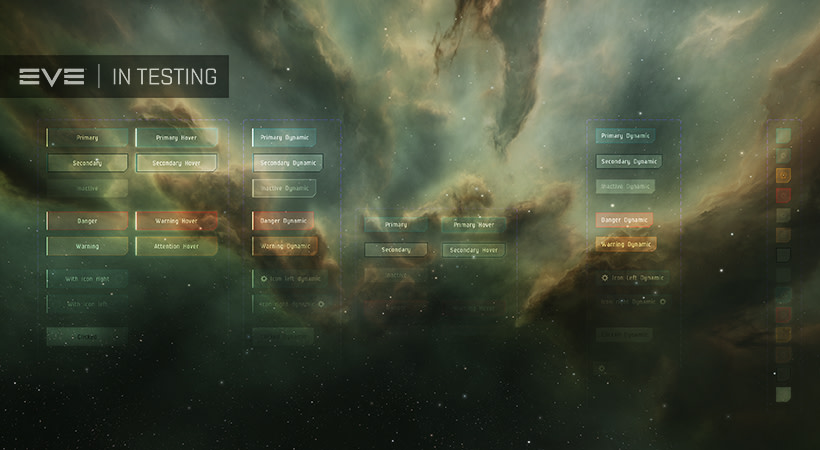 The new Feature Preview system is live, allowing players to opt-in and engage with complex features still undergoing active development, test driving them directly in the EVE client. The debut preview feature is a UI unification project, aimed at improving consistency and creating a better onboarding experience for new players. Activity within the feature is being monitored and based on feedback from the Singularity test server, window controls have already been made permanent with more changes on the horizon. There were already plans for a compact version of certain windows, and thanks to feedback, we are looking to expand on this aspect of the designs. Stay on the lookout for some of these margin changes coming out over the next few months!

The Feature Preview system can be accessed via the Settings Menu (by pressing 'Esc'), under the 'Feature Previews' tab. Any features available for preview will be listed on the left and can be opted into by selecting them and clicking the 'Enable' button. Enabling (or disabling) these features will often require a restart of the client, after which the selected features will be part of your EVE Online experience.

The features offered in the preview system are temporary and can easily be turned on or off. It is important to note that the features will not be in their final form. Check out the full blog on the Feature Preview System for all the details and be sure to give us feedback on the official forums. 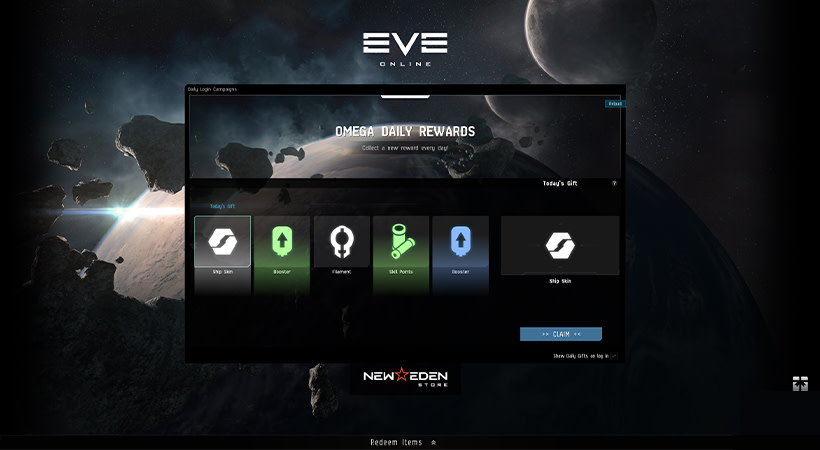 EVE’s daily login bonus system has been revamped, bringing more variety and better rewards every time you board your capsule and enter New Eden, as well as a fresh UI.

The new rewards include over 250 brand-new SKINs from the Halcyon Dawn and Carmine Horizon lines, as well as almost 150 returning event SKINs – and these will all be permanent! In addition, Skill Points will regularly feature as part of the daily rewards instead of the separate Skill Point track of the previous incarnation, with the overall average number of Skill Points being rewarded remaining the same as before over time. 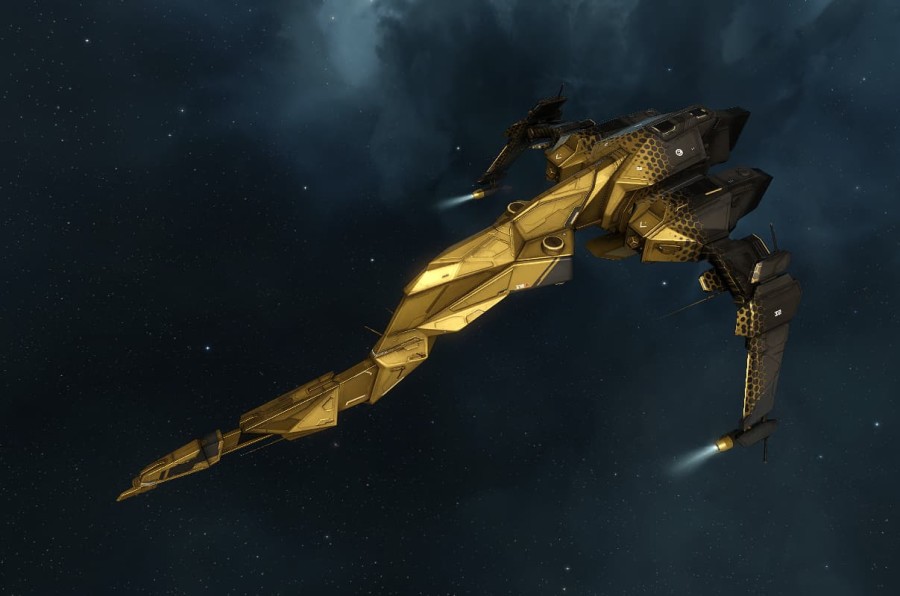 There will also be more versatile boosters handed out that apply a large variety of small bonuses, making them useful to all types of Capsuleer. Check out the forum post for even more details on the refresh! 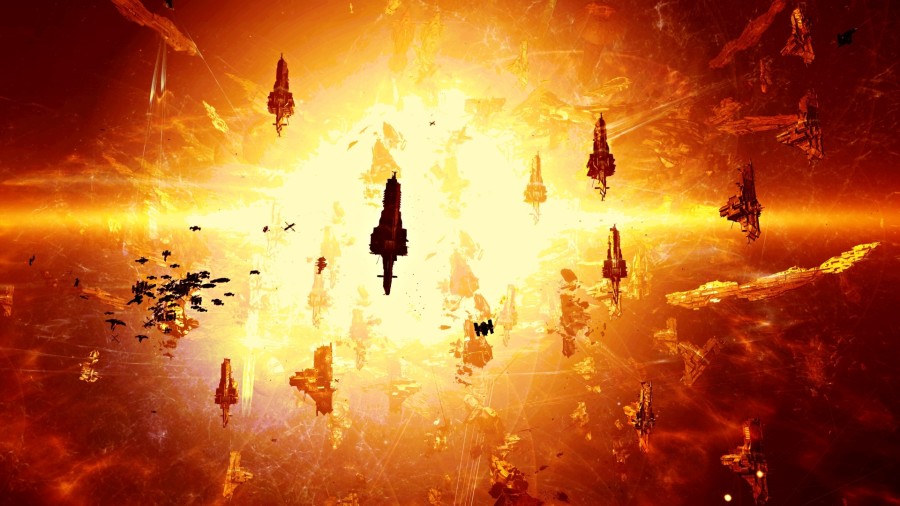 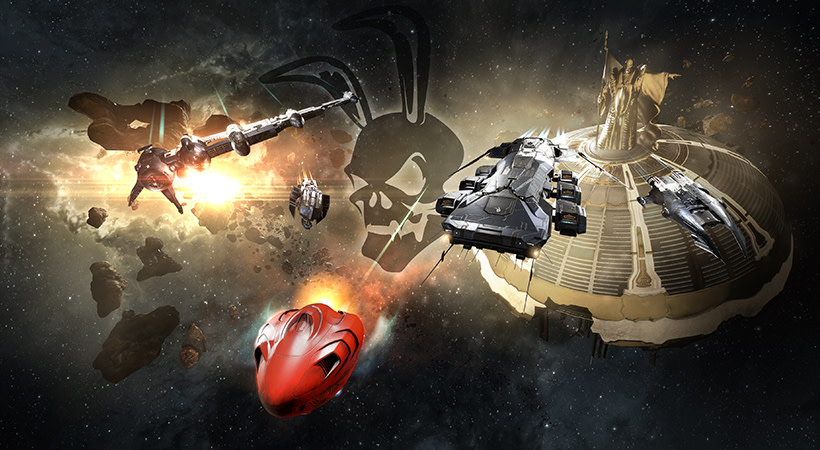 The Hunt event will be returning to New Eden very soon! Discover and track down the Mysterious Capsules at random celestials across space for keys to Guristas event combat and hacking sites from 7-19 April.

Guristas Hunt Outposts and Hunt Data Replay exploration sites can be found anywhere, and both will reward you with unique loot limited to The Hunt. For a greater challenge, head to the Venal region or Caldari Lowsec to find the more difficult Guristas Huntmaster combat and exploration sites, and even a brand-new site suited to capital ships.

This year, there will also be rare Mysterious Golden Capsules which can spawn everywhere, but are much more common in Venal and Caldari Lowsec, dropping special loot including multiple site keys and data vaults that you can sell to any of the empires.

Mysterious Capsules aren’t the only pods to hunt during the event. Catch and loot player pods for a chance to loot their implants. 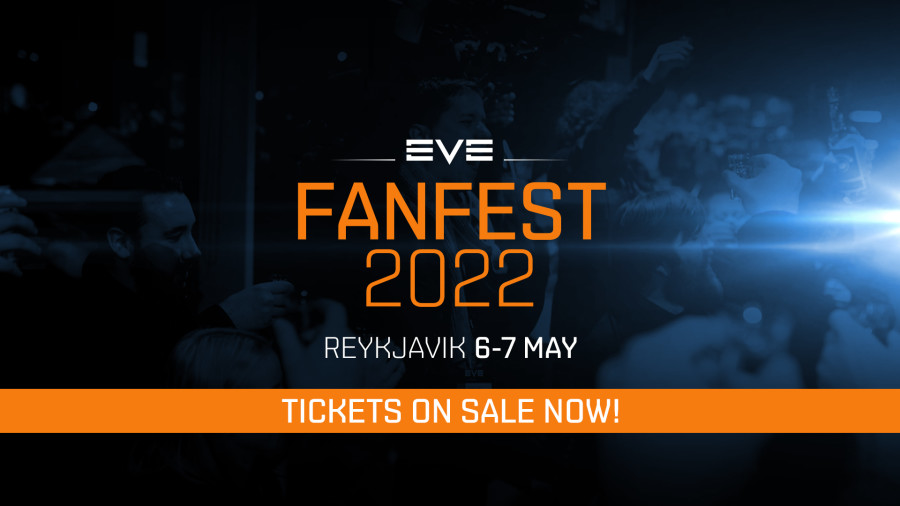 Fanfest 2022 is a mere month away, and even more changes are coming! With this round of updates, the ones that have gone before, and the ones that are yet to be announced, the Road to Fanfest is a rewarding one that leads to a brighter future for EVE Online and for New Eden. Stay tuned and fly safe (to Iceland)!