The EVE Online Ecosystem Outlook | EVE Online
Back to news

In EVE, much of 2020 was spent in renovation working on the goal of regaining control of the EVE economy which had been spiraling towards major excess of ISK, minerals, and assets. This endeavor has not always been simple or comfortable, so you are to be acknowledged and thanked for your resilience. The stage has been set for a more abundant and sustainable future for EVE. Before that future is discussed, here’s a look at some of the accomplishments this year:

CSM collaboration has been very constructive this year, both with CSMs 14 and 15. Not being able to meet in person and build on relationships with the Council due to COVID-19 is regrettable, but hopefully the world will be in a better place soon and all can return to in-person meetings again. At the beginning of the Scarcity Phase, the strategic decision was made not to involve the CSM before the rest of the community. As fundamental changes were made to the DNA of the universe, preserving the integrity of everyone involved was a priority.

There is a lot of trust for the CSM, but the decision was made not to put them in a position where other players could claim they had forewarning of major economic changes to the game. Interactions with all members of the CSM are highly valued and there is daily communication with them, debating various topics back and forth. Thanks to their work dedication and expertise, a number of plans and changes have become much stronger as a result.

As iteration took place at a much faster pace this year, not everything has been perfect from the moment it went live on Tranquility. This is another area where the CSM has been extremely helpful. When combined with data and feedback that is regularly collected from the entire EVE Online community, it’s been possible to follow up quickly on key changes such as the reverting of the “Aggressive” setting on drone behavior. Other moments saw rapid iteration on the ESS, DBS, and the Activity Defense Multiplier (ADM). Next year will be a continuation of bold changes with quick iterations based on monitoring, data, and feedback.

It is clearly understood and acknowledged that many players are faced with reduced income and some radical changes to what they have become accustomed to in New Eden. To make it abundantly clear, scarcity is not the new reality, this is a temporary phase and it will end.

In 2021, further steps will be taken towards the long-term vision, while observing and reacting quickly to player actions. Here are few of the steps planned for 2021, with more detail to follow as live dates approach.

The Prognosis of the EVE Ecosystem

Now follows a brief overview of some of the things being used to determine the state of the EVE Ecosystem. The current health of the Ecosystem can be measured across three main categories and each has been assigned a simple grade for health (AAA/A/B/C/D) and a trend (Improving, Stable, Worsening) with various health indices feeding into this grading.

All of this is also subject to what is fed back from the community. Metrics are important, but what you are saying about the game is also important and noted.

The current health of the Ecosystem can be measured across these 3 main categories, and they have each been assigned a simple health state (AAA/A/B/C/D) and a trend (Improving, Stable, Worsening) to each. A handful of Health Indices have also been defined to guide the prioritziaton and focus while listening to the community. 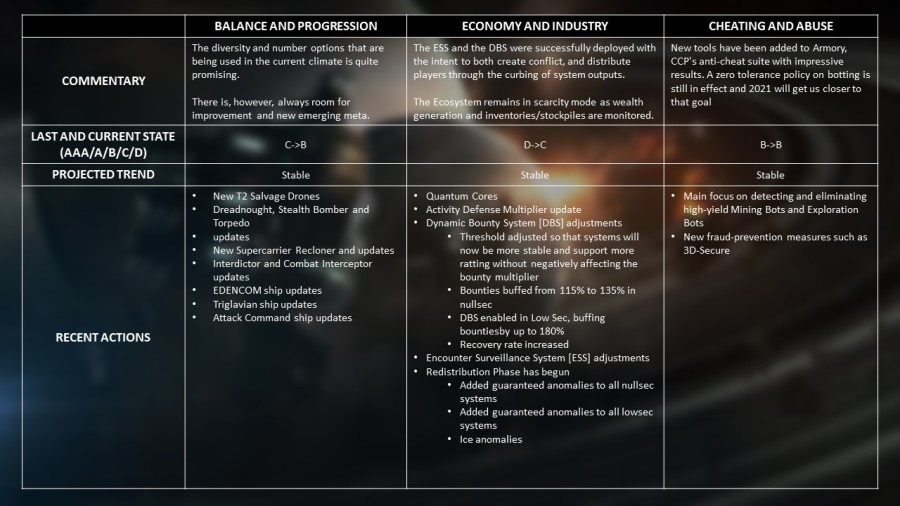 No EVE Ecosystem post would be complete without discussion of bots and RMT. Please don't buy ISK from RMTers and don’t let your friends buy ISK from RMTers, either. Botting and RMT negatively affect everyone. Thank you all for reporting bots, the in-game bot reporting tool is being prepared for further improvement.

There is continuing commitment here to rooting out all forms of botting and RMT in EVE, and everything possible will be done to shut down ISK sellers, to make botting harder, and to punish those who repeatedly try to rip off our community. The main focus has been on high-impact botting, but additional focus will be assigned to highly visible botting also. So far this year 42,000 bans have been issued, of which 15%, or around 7200, have been reported by vigilant players. Thank you for your help in improving our algorithms and processes, every report counts!

2020 has been a year of rebuilding. The work this year on the EVE Ecosystem has been focused on long term health and sustainability for EVE, to ensure that player choices matter, loss has meaning, and to ensure that the universe is dynamic and changing. Great steps were made towards such an ecosystem this year and many EVE players have already started reaping the benefits through new income streams and many more will continue do to so.

Fly Safe and see you next year.

To join player discussion on this topic, please head over to the official thread on EVE Online forums.