EVE Online is turning 19 in just five months’ time, and we cannot wait to celebrate it with you in person in Reykjavík come May 2022. We want to set EVE up for a thriving third decade, and ultimately have it outlive us all. To achieve that – as you have heard about before – the last two years have been focused on three pillars; building a vibrant EVE ecosystem, helping new players out to make sure there are new untrained pilots coming in every month to join your ranks, and investing in the technical infrastructure of the game. 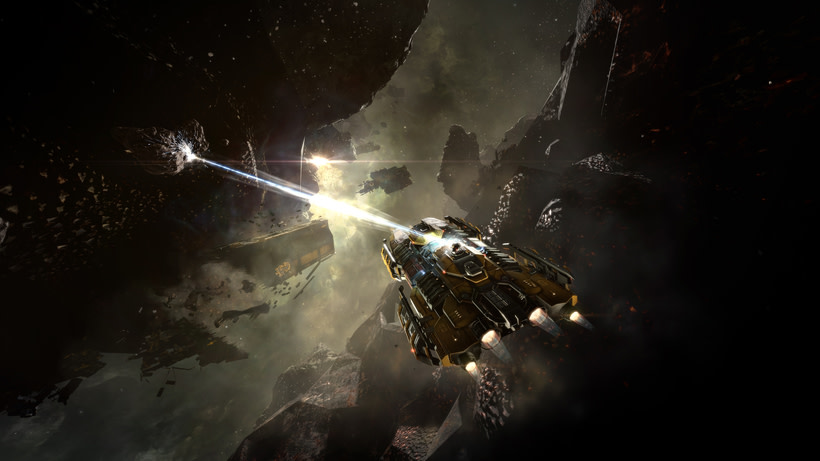 Nearly two years ago we – both CCP and the players – began a massive undertaking: to bring the economy to a healthy state, and to set the game up for a third decade. We understand full well that it was not without challenges and hardships, and while EVE players are well known for being the most resilient problem-solvers in gaming, we’re aware of the strain it put on you. Now that order and balance has been restored to the resource and manufacturing aspects of New Eden, more resources have and will become available, and focus can be put on other areas of New Eden.

From Extraction to Production announced a bevy of changes. We typically don’t post updates as comprehensive, dense, and raw as we did with this blog (it was more a Dev Proposal & Discussion than Dev Blog) but with so much changing – and so much at stake – we wanted as much feedback on the changes as possible.

On that note, it has been a lively few weeks. We’ve been listening, discussing, and adjusting based on comments and responses. A huge thank you must go out to all those players who started conversations and provided constructive feedback on the forums, podcasts, blogs, streams, Discord communities, and elsewhere. We’d also like to thank CSM16, with whom we’ve been working with on these changes since August, for providing valuable feedback and context for the upcoming changes.

Mining is the cornerstone of New Eden, and mining ships across the board are now stronger, more efficient, and more accessible. We want to create the same kind of diversity for miners as the other careers and we are already seeing a large increase in both mining volume and numbers of players mining. This also opens up possibilities for the future, especially as it pertains to dynamic distribution or future mining sites.

Attention will be paid to production bottlenecks as they arise. Faction & pirate ship construction will be viable to undertake. For battleships, the approach will be to boost the power of those ships to be more in line with the cost and complexity associated with building them. Battleships hold a great spot in EVE's history, and we want to ensure they've got a suitable place in the meta for both PvP and PvE.

Areas of focus until Fanfest

It’s time to look ahead. New Eden has strong foundations, so now is the time to look at additions and improvements, rather than removals and revisions. Below you can find some highlights of the focus areas until Fanfest.

Since the early days of EVE, mining and industry has amounted to the following: train these skills, fly this ship, fit these modules and now you’re the best. Too often there was no choice because there was only one choice, and at odds with the rest of EVE, which puts a high value on specialization and different options. To that end, we want to ensure there’s a dynamic where industry experts can flaunt their knowledge and mastery of systems, and gain a competitive advantage so that their specialization and decision-making is rewarded.

Compression is a key element of industry, and expanding into gas & moon ore is vital for the economy. As with mining, industry-minded players will have more tools at their disposal. That said, our aim is to add decision-making – not tedium – and the compression update will reflect that.

During the Age of Abundance, a few hundred Rorquals were outperforming the rest of the universe combined in terms of mining yield. With the Rorqual being so efficient and powerful, it almost necessitated players to form larger and larger groups. It was simply the best at everything, with no tradeoffs, and was pricing players out of the market.

While the role of the Rorqual has been reverted to on-field support ship, its buffed Mining Foreman links, PANIC feature, survivability, and compression capability – tied with an impressive solo mining yield – make it a crucial asset for mining operations in Nullsec and Lowsec. And, as some of you may have seen on the Singularity test server, we are also considering improvements to Rorqual maneuverability with group-jump features. 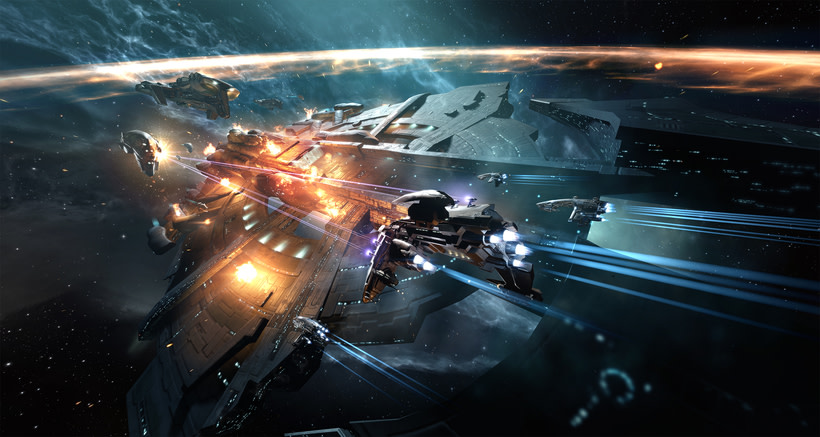 Whether you're planning to fly them or build them, Capital Ships represent an aspirational goal for many players. A well-orchestrated 'Dreadbomb' should be a cost effective counter to other Capital and Supercapital classes, and we see time and time again the amazing fights that these create. As the industry changes settle, the material requirements to build these ships to ensure they are both cost effective and replaceable will be reviewed.

In addition, more capital-oriented combat sites are on the horizon, which you already may have seen a glimpse of in the Winter Nexus event. We look forward to working with the community in the future to make sure these sites will be rewarding enough to be worth the risk.

Citadels play a critical role in New Eden and like anything have areas of opportunity. This entails citadel proliferation and combat, specifically targeting structure combat, tether and placement rules, with special attention paid to the roles structures play in the Faction Warfare warzones. Many of these topics were raised by dozens of New Eden’s most talented and prolific Fleet Commanders across all areas of New Eden, and with large undertakings like this, it is important to listen to all points of view.

Aligning and improving sovereignty and how ownership is established across the universe is incredibly important, to both new players and veterans. The plan is to create tactical in-space objectives for small, medium, and large groups in space to fight over and allowing players who control space to decide what that space will be used for - with iHubs playing a critical role. Stay tuned for more. 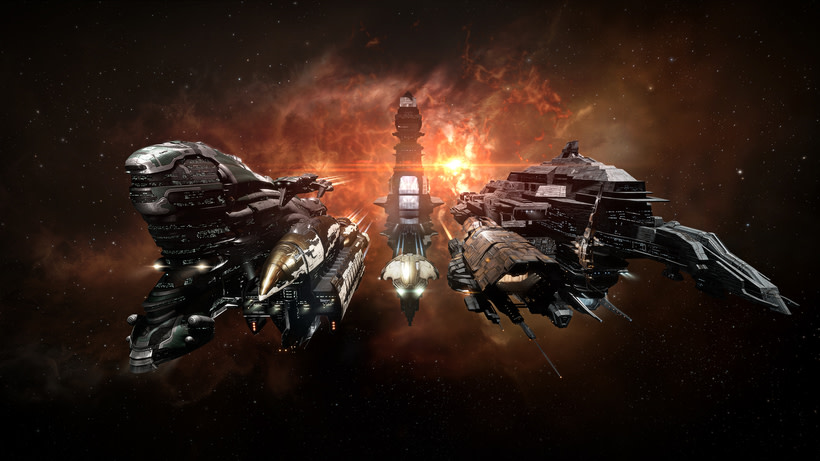 September was a great and an important month for EVE. The recently-introduced AIR New Player Experience (NPE) that launched in September is an engaging, cinematic experience, and already the average first session of people trying out the game for the first time has increased by 30%, which is leading to increased retention.

The next step will be to add a mining chapter in order to teach a core competency, give new players a taste of more things they can do in New Eden, and give them a fundamental skillset. As time progresses, the goal is to move further into a Capsuleer’s life and apply the same tech and artistry.

With the update to skill training and introduction of opportunities, we are helping players set goals early on in their EVE career. The newly released Corporation Skill Plans allow players to author optimal Skill Plans to get new recruits up and running, as well as create doctrine Skill Plans for combat operations, industry etc.

Furthermore, fittings are supported in the creation process so players without corporations can still tap into community power by dragging community fittings into their Skill Plans, starting training with a single button click. Additional acts of the NPE will fold updated Career Agents into the mix.

The EVE Academy website, which is seeing a lot of traffic every day, has been continuously updated since launch and has received an overhaul to make it even more beneficial for players.

EVE launched on the Epic Games Store in September and went fully native on Mac in October. Both of these avenues have seen an influx of new and returning players coming to play the game.

This adds up to more cadets that are better equipped for corporations to recruit, players to fly with, or spaceships to blow up.

The September release was a significant moment in time for EVE, with the introduction of Quasar. More and more features of the game are now being decoupled from Tranquility and moved into Quasar. Lost in the bright lights of the new NPE and tucked under the pixels of Skill Plans reverberates a fundamental change in how EVE Online moves into the future, allowing more power to go to the things you love; blowing up spaceships!

The technological advancements made by launching EVE natively on Mac are already contributing to internal development efforts to modernize the game engine. There will be more news on this early next year and we are excited to bring new capabilities and advancements to EVE.

Why is this important? Modernizing the tech stack of EVE is pivotal as it allows for more momentum and agility in a rapidly changing world. It also opens up more opportunities to expose more powerful features across more mediums, but more importantly it simply decreases the load on Tranquility, which in turn increases performance. We are in a perpetual arms race with the EVE community; as the tech behind EVE becomes more powerful, the Capsuleers of New Eden find ways to push Tranquility to its absolute limits.

For the last 19 years, the EVE community has set record after record when it comes to gaming's biggest battles. We don't see that changing any time soon and will continue to try and push the boundaries of what is possible when it comes to large-scale warfare. 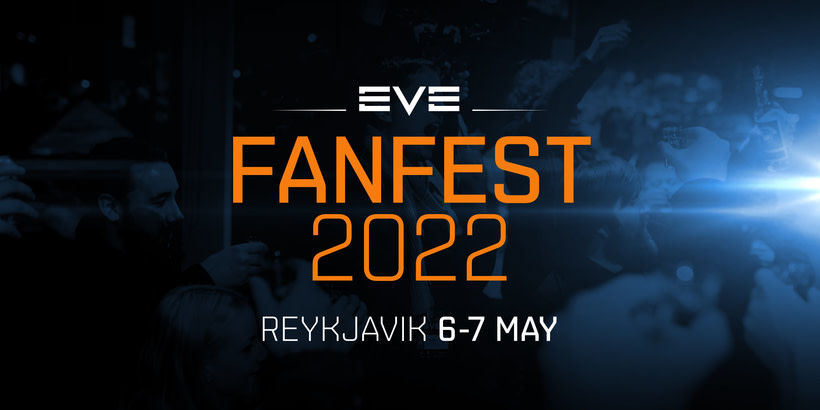 The foundations of the EVE ecosystem are strong. PLEX prices have stabilized, stockpiles are healthy, great strides have been made in the war against botting (as evidenced by the skyrocketing RMT ISK price), and there are more ways to earn a living. The foundation allows us to build with more confidence and add more sand to the sandbox. What players can expect from now on is an increase in ship production, capitals out in space, new exciting strategic goals for small, medium, and large fleets – and more.

Whether you’ve just started your EVE journey exploring in a Heron, or you’re a seasoned vet mining in a Mackinaw or brawling in a Vargur, there’s nothing that beats hanging out with EVE players. We’ve already had the good fortune of meeting players at EVE Vegas & EVE London this year, as well as chatting to the pilots at EVE Down Under. Nothing is quite like having hundreds of our closest space friends pile into Reykjavik for EVE Fanfest.

We can’t wait to see you this May for EVE Fanfest – either here in Reykjavik or watching at home on CCPTV - and share more about the exciting plans for the future of EVE Online; increased agency, making player actions matter even more, impacting how the world reacts to player interaction and how empires and alliances wage their wars. 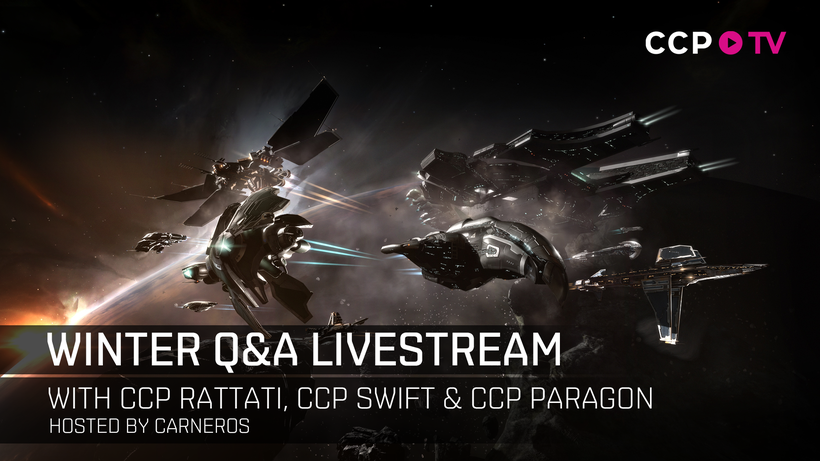 In the short term, join CCP Rattati, CCP Swift, and CCP Paragon on CCPTV this Thursday at 19:00 UTC, 16 December for a livestream and Q&A for insights on anything EVE. Finally, for the holiday season, jump into the Winter Nexus! In this event, anyone can find some activity to their liking, be it combat, exploration, or mining - and even rumors of the new experimental capital site. Don’t forget to claim your rewards during the 13 days of Nexus!

From all of us here at CCP, we wish you a happy holiday season.