A New Way to Test Features

As a part of our ongoing efforts to lay the foundations for EVE Online’s third decade and continually improve the world’s largest living work of science-fiction, we're happy to introduce the Feature Preview system – allowing players to opt-in and engage with complex features still undergoing active development, test driving them directly in the EVE client.

Our aim is to more fully incorporate feedback into our prototypical process by allowing you access to these features early while we design them. Your invaluable feedback on past features has already allowed us to improve and shape them into better additions to EVE – and this new way of testing will allow far more exposed development, enabling earlier chances for players to express important feedback while also allowing our team to gather information on how you play EVE and what will best aid you in that pursuit.

The preview system is available on Singularity and comes to Tranquility in April. The debut preview feature will be a UI unification project, aimed at improving consistency, creating a better onboarding experience for new players, and reducing cognitive load for all players. The features offered in the preview system are temporary and can be easily turned on and off. Your participation is optional, and it is important to note that the features you will be given access to will not be in their final form. We look forward to learning from what you, the players, think as we introduce new features and build the future of EVE Online hand-in-hand. 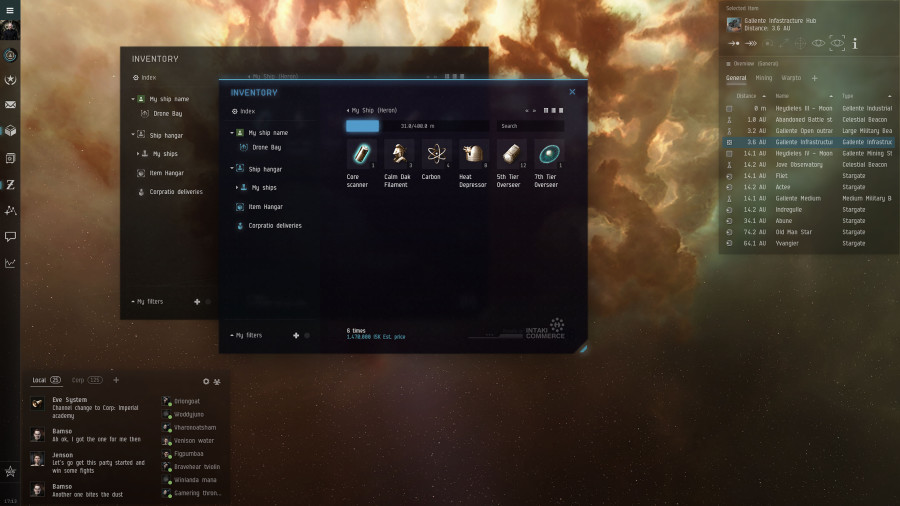 Over EVE Online's long development history, the user interface has seen many iterations. New feature additions often came with their own specific updates to the UI – and some of these, being a product of their time, have led to some inconsistencies in the overall interface experience.

As the debut feature of the 'Feature Preview' system, the Photon UI project aims to create a unified style for EVE Online's user interface. While not drastically different from what you may be used to, consistency is the driving force behind these new designs. We are focusing on quality-of-life updates like improved interaction feedback, unified functionality, and an updated sci-fi look.

The first round of changes is now available on Singularity and comes to Tranquility in April, bringing adjustments to the window style, margin and spacing updates to reduce cognitive load, and a unification of our UI color schemes used for feedback purposes - blue for call-to-action buttons, orange for warning interactions, and so forth. The second update later this year will see the addition of new effects such as glowing elements, new interaction sounds, and animations.

The Feature Preview system, can be accessed via the Settings Menu (by pressing 'Esc'), under the 'Feature Previews' tab. Any features available for preview will be listed on the left and can be opted into by selecting them and clicking the 'Enable' button. Enabling (or disabling) these features will often require a restart of the client, after which the selected features will be part of your EVE Online experience. Some of the features that will be available via this new system may be fairly complex and in active development, which could lead to some strange and unintended side effects as we iron out the kinks and buff out the dents. This is an important part of the process, which is why we are inviting you to experience it with us.

These features may go through many stages of development and are not intended for immediate launch. It may be possible at times that you are only seeing a piece of a larger feature, or a concept intended to finetune a trajectory. If you prefer to return to your regular, familiar feature set, you can easily disable any of the opt-in preview features from the 'Feature Previews' menu. We will measure the quality and reception of preview features by measuring usage, gauging satisfaction with surveys and interviews, and playtesting. Your feedback through these channels will be important, and we want to ensure that only after ample iteration and proof of positive impact will these features be made a part of the overall EVE experience.

Many different hands have played a part in building the vast world of New Eden. The synthesis of these perspectives has provided a strong backbone for EVE’s development over the years – and we aim to carry this strength into the future by incorporating the hands of you, our players, as well.

We invite you to share any and all feedback on these features – whether you love them, hate them, or just have some thoughts on how we can improve them. For now, you can join the player discussion in this blog’s official discussion thread on the EVE forums, but know that we are activating new lines of communication as well. If you have enabled a feature in the 'Feature Preview' system, you may receive an email from us containing a small survey.

We'd like to express our immense appreciation for any of you who take the time to participate and provide feedback for game features, look forward to being joined by our one-of-a-kind players on this journey of discovery, and are excited to bring you open access to EVE’s development process through the Preview System. Together, we'll continue to improve the world’s largest living work of science-fiction and make EVE Online the best MMO out there.

Thank you, and fly safe!