CCP has been doing quarterly reviews of the state of the economy in EVE Online for a while now. These reviews have been for internal purposes to help our developers better understand how the macro trends are developing in the game. For this purpose, a wide-ranging tool set has been set up for monitoring everything from in-game data points, dashboards and indexes as well as sending out a survey to players for each quarter where they rank statements and situations in the game. Last but not least, special council is sought from individual players in the game such as CSM members.

This time around, some of the developments that are being noticed are shared in an effort to promote a better dialogue around the economy and macro in-game situation. In every case, the playerbase is an important source to understand the complex ecosystem that is EVE and very often conversations with players sparks giant in-house research projects. Having said that, it is important to keep in mind that the blog intentionally leaves out information that can be considered "vulnerable", so this is not the full report, but rather a summary of some of the megatrends that seem to be permeating the world in the first quarter of 2020. Hopefully, you will find this interesting and it will add some depth to the EVE world.

There are three big trends to pay attention to for the first quarter of 2020 in the EVE economy.

The 1st quarter of 2020 was mostly a good quarter for the economy. The Problem Index, which is an index put together by players' rankings of 12 potential problem areas in EVE, shows improvement in 67% of our main problem areas which is great. There are also strong indicators that the economy is now more fair, that the value of labor is increasing and that connectivity is increasing - all positive trends.

1. It seems that the economy is getting fairer

Anti-Botting efforts are removing massive amounts of ill-gotten ISK from the economy and making it harder to bot. This seems to correlate with lower PLEX prices, which makes sense since massive bot farms are no longer constantly driving up PLEX prices with their cheap ISK. Players seem to be taking notice since a year ago only 37% felt CCP was taking active action against botting, but today that number is 50%. Also in Q3 2019, 66.9% of players believed botting to be a serious problem in EVE, but today that number is 52.6%. Botting is absolutely still a big problem but headway is being made in a meaningful manner and it is being noticed.

The Economy Fairness Index consists of 6 statements about the state of the economy that players rank every quarter, all of them dealing with fairness in the economy. The average concern ratio for Q1 2020 is 46.4% compared to the average concern ratio in Q3 2019 which was 52%. So overall, players are ranking the economy to be more fair. Again, there is a lot of work to be done but player feedback indicates things are moving in the right direction.

2. Strong indicators that the value of labor is rising 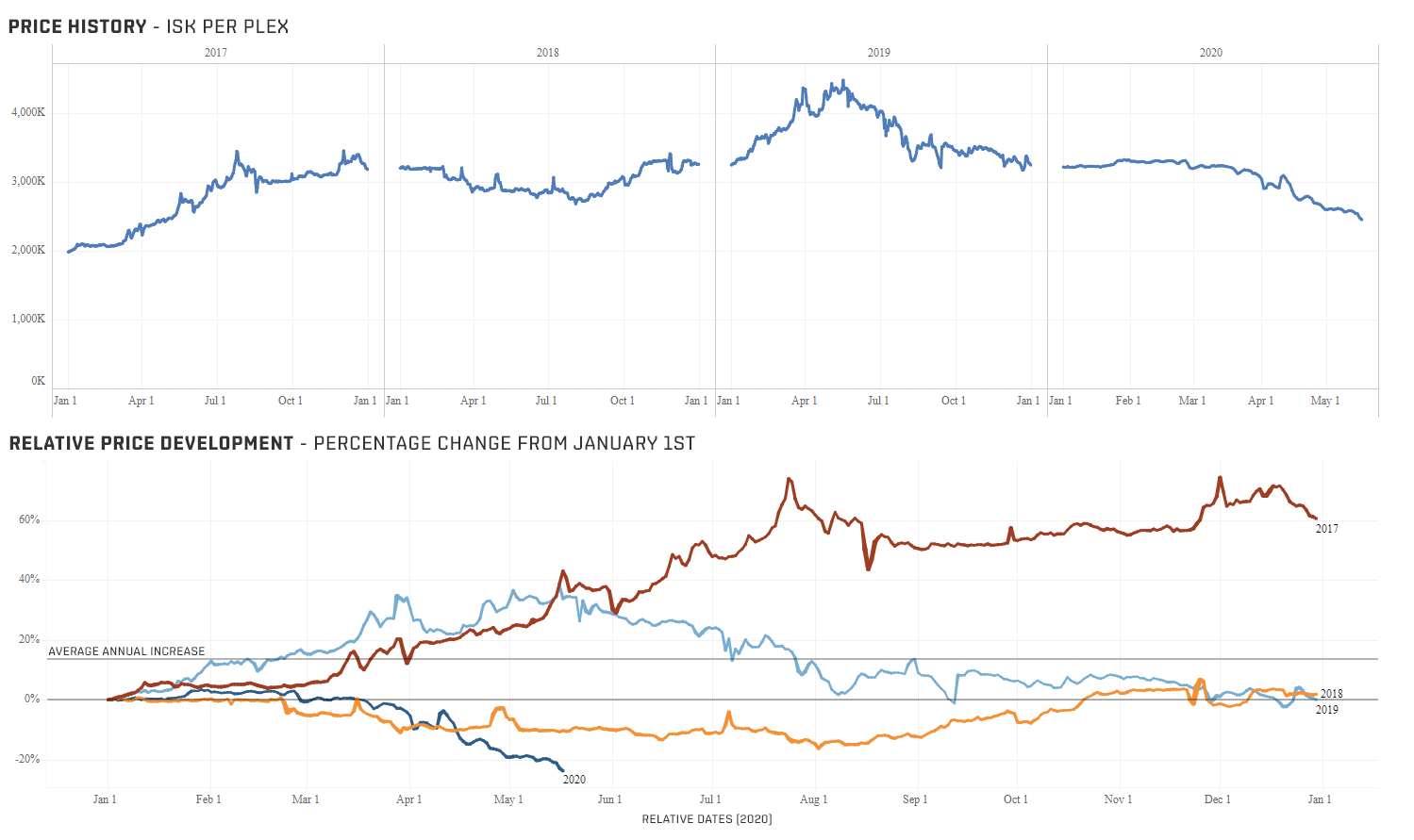 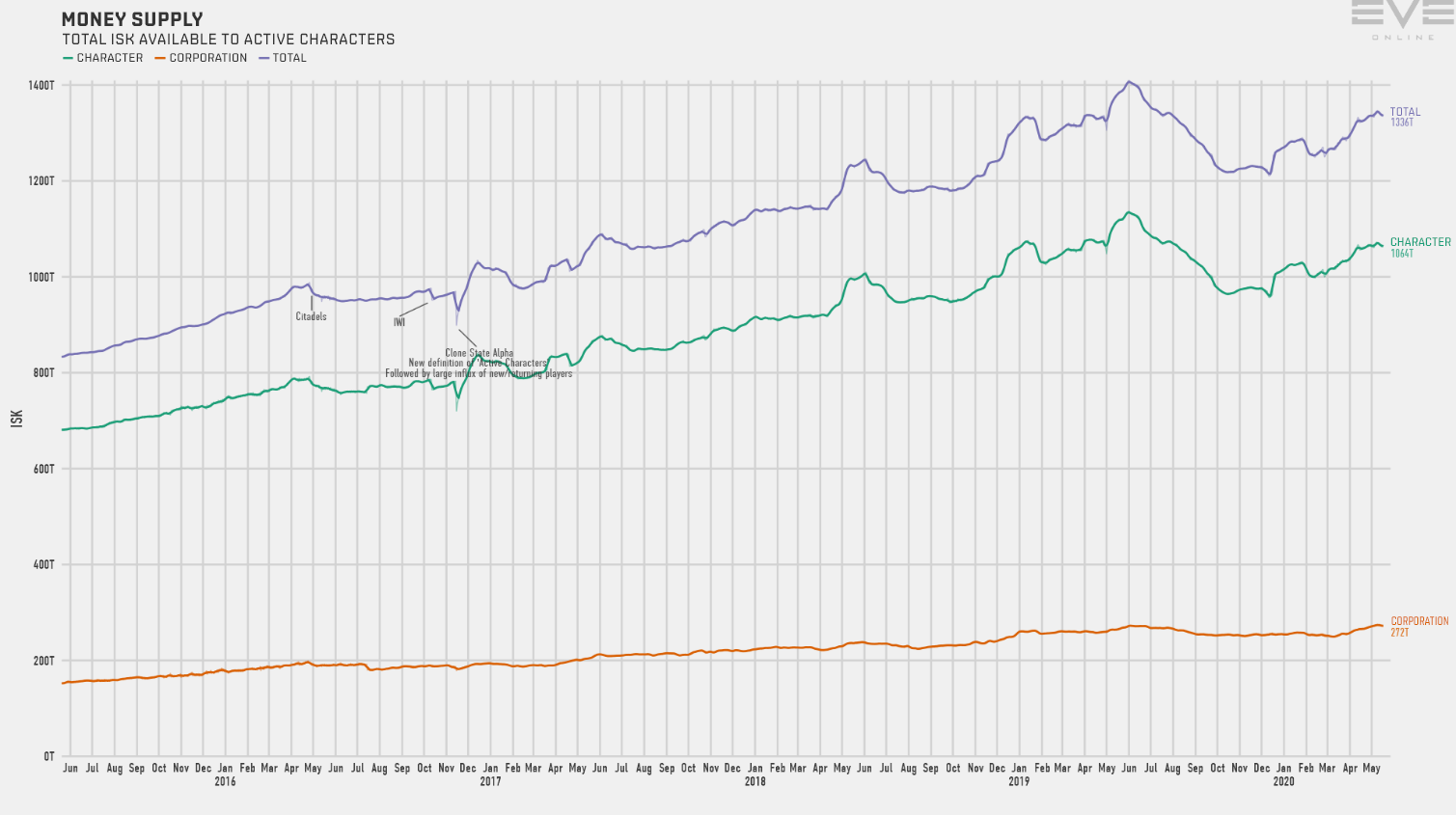 3. Connectivity is increasing - The Friendship Machine is getting hotter

Q1 saw a bunch of "connectivity" changes introduced to the game intended to spur connectivity between players. These are as follows:

This, partnered with the fact that many more new players are entering the game and solid events happening, have led to social markers for "connectivity" improving considerably in the quarter:

CCP sends out quarterly surveys where players are asked to rank a range of social markers such as the difficulty of finding other players, conflict, content etc.

In short, there are now more chance encounters in the game thanks to Filaments, you are more likely to run into someone in a wormhole due to more players in-game, and you have greater incentives to participate in Faction Warfare. All of this is leading to more connections, which hopefully is fuel for more friendships being made. Keep in mind that 73% of players claim they have made a friend as a result of playing EVE Online. Let's hope this phenomenon is increasingly being delivered well to the hordes of new players now entering EVE Online.

As stated at the beginning, this is just a glimpse of the internal economic review that is conducted every quarter. We hope you found it interesting!

If you would like to discuss the dev blog please head over to this thread on the forum.