Minmatar Liberation Day is on 10 July and to commemorate the event, celebrations will kick off today, running through to 20 July! This historic event marks the day that freedom was secured for billions during the Great Rebellion. The celebrations represent the tenacity and strength of the Minmatar people while also marking remembrance of those Matari who still languish as slaves.

The centerpiece of the Liberation Day celebrations this year takes the form of a friendly tribal tournament open to Capsuleers of all races – The Liberation Games.

Pick one of the Seven Tribes that best represents what you stand for and get involved in exciting new events happening all across Minmatar space. For your efforts, you will be rewarded with boosters, SKINs unique to your tribe, and in true Minmatar style, a special tribal tattoo. Additionally, every event that you take part in will add points to your tribe’s point pool. __The winning tribe will take ownership of a newly constructed station in Pator alongside a monument to their victory. __ You can choose your allegiance using The Agency in-game from the following Seven Tribes of Matar:

Get inspired for the Liberation Games by watching this address by Minmatar Sanmatar, Maleatu Shakor and learn more about their 700-year struggle.

As a part of the Liberation Day celebrations, you will be rewarded with gifts every day that you log in. Gifts are available for both Alpha and Omega Capsuleers, and upgrading to Omega at any point during the events will unlock all previous rewards that you might have missed!

Rewards include Capsuleer clothing, Skill Points, Minmatar SKINs, and a useful 4-day Minmatar Expert System. This Expert System will open up access to all the skills you need to excel as a Minmatar pilot in the new combat sites or in fiery Rifter combat in the Proving Grounds!

In addition to login bonuses, the Republic Fleet will also be on parade around Minmatar space. You can get bonus Skill Points by visiting them and launching fireworks at their mighty vessels. You’ll find the fleets in Rens, Hek, Eram, Teonusude, Pator, Altrinur, and Hjoramold. The Liberation Games bring new combat sites to get stuck into. Join your Matari brothers and sisters and live out historical re-enactments of famous battles in the Minmatar struggle for independence. These sites make use of drone technology to represent Amarr ships, keeping the re-enactments from igniting a diplomatic incident. The combat sites are tuned for T2 frigates and T1 cruisers with completion rewarding points towards your tribe.

For pilots not as interested in combat, there will be hacking sites available for completion as well as a Minmatar Mining Blitz! Warp over to the Republic Mining Expedition sites to earn Republic Fleet Ordnance Spike SKINs for the Vigil, Talwar, and Cyclone. As with combat sites, everything you take part in grants points to your chosen tribe!

Uncover the rich history of the Matari people with a new set of lore landmarks across Minmatar space. From the Great Rebellion, through to the formation of the Republic and the reunion of all seven tribes, you can follow the progress of history across New Eden.

Completing the lore route will reward you with additional points towards your tribe’s total shown in The Agency, so why not use this opportunity to learn more about who you are fighting for? There will also be a 2AU/s warp speed bonus in Minmatar space, allowing you to visit the monuments quickly in addition to any other activities you take part in.

Finally, there are two new monument sites now erected in memorial of key Minmatar figures. You can visit the statue of the late leader of the Defiants, Karishal Muritor in the Auga system or pay your respects to late Prime Minister, Karin Midular in the Pator system at the gathering location of the Tribal Council. Heat up the Abyssal Proving Grounds from 16 to 20 July with the four-player free-for-all Rifter Glorification Proving Ground. This event will feature the Minmatar Rifter-class frigate only and is limited to meta level 5 modules and implants.

There will also be a 100% bonus to the benefits of overheating in this Proving Ground so you can push your rusty frigates to their limits in true Minmatar fashion. This is the perfect opportunity to get use out of the free Minmatar Expert System handed out on day 2 of the Liberation Day celebrations. Returning only during the Liberation Games, the holographic Freedom’s Revolution SKINs will be available in the New Eden Store until 11:00 UTC on 20 July. Previous years’ SKINs are returning for a variety of powerful Minmatar hulls alongside four new SKINs for the Republic Fleet Firetail, Svipul, Muninn, and Naglfar. 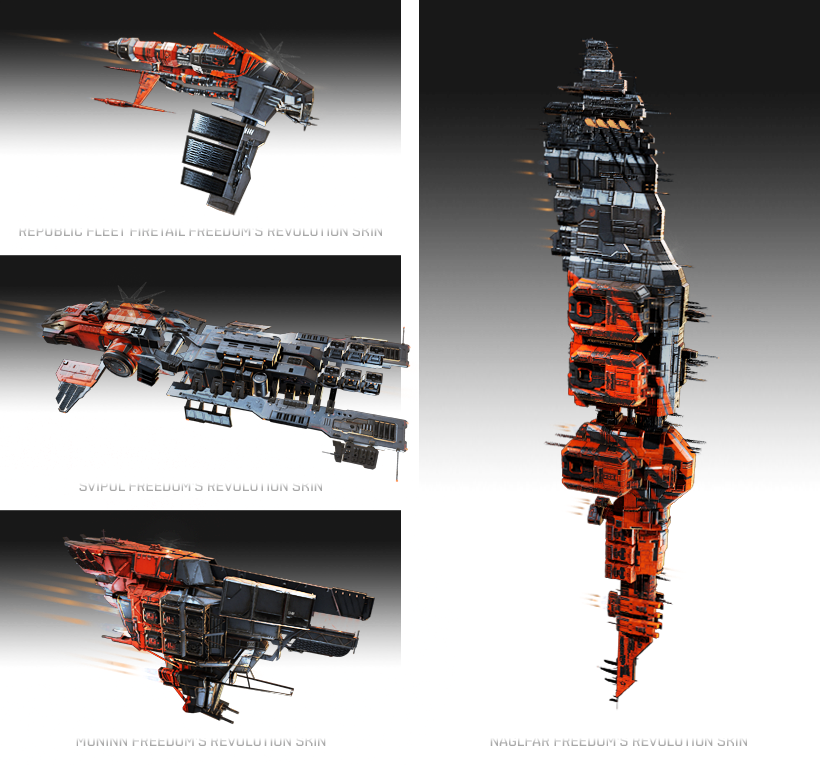 Frigate, destroyer, cruiser, and battlecruiser SKINs are only 250 PLEX, with battleships and capitals higher at 390 and 695 PLEX respectively. If you’re looking to make some savings while this offer is on, the Power of Freedom and Power of Revolution bundles are available, bringing discounts to these SKINs for popular Minmatar ships.

For pilots looking to pick up some Omega time during the Games, you will be receiving a free SKIN alongside it! One month Omega time comes with the In Rust We Trust Jaguar SKIN, or you can get SKINs for the Sabre, Loki, or Vargur at 3, 6, and 12 months respectively. With all these exciting events going on in the coming days, make sure you get logged into EVE so you can experience the rich culture of the Minmatar people. See you in space, Capsuleers!