If you would like to discuss this policy change please head over to this thread on the official forums.

At EVE London in November, CCP announced a significant change to internal policies which govern how CCP employees interact with players when using their non-developer characters in EVE Online.

Our long-standing policy has been that a CCP employee must maintain anonymity when playing EVE on their player characters. While this was intended to be a safeguard against creating a perception of developer bias towards certain in-game groups, the unintended consequence was that it has prevented developers from fully engaging with certain areas of the game.

Although this affects developers partaking in many playstyles, it especially applies to engagement with sovereignty nullsec and wormhole groups. Due to the nature of EVE Online these groups in particular often have very sophisticated security measures in place to prevent infiltration by spies and attempts by a developer to hide their identity may only heighten suspicion and lead to them being exposed.

Additionally, the more front-facing developers at CCP can be quite well known in the community, to the point where their voices may be easily recognisable to players on comms when participating in fleets and other activities.

This all adds up to a situation where the probability of a developer’s identity being discovered is quite high, and as you can see in this excerpt from our long-established policy, being “outed” creates a big headache for both the developer and our internal affairs department:

“Employees should contact a Lead Game Master or IA immediately if their in-game identity is compromised or made public. The compromised character should not log into the game until the matter has been investigated and may be moved or removed, depending on circumstances.”

The risk of exposure and the consequences coming from it has had the unfortunate but understandable effect of discouraging many CCP employees from embracing certain playstyles and instead nudged them into largely solitary existences in EVE Online such as playing solo, retreating into alt corps, or sticking to small, CCP-only corporations where hiding their identity doesn’t pose an issue.

So it’s time for a change. Effective today, this policy has been updated to remove the requirement for anonymity. Developers may now play where and with whom they wish, and may decide for themselves what level of anonymity they want to preserve.

This policy change has come about from many discussions with EVE players at gatherings, advice from the CSM and internal discussions within CCP, and we feel that the benefits of this change are clear: lifting the restriction on sharing our identity will enable the developers to participate more fully in EVE Online and in doing so gain a better understanding of the experiences players enjoy and challenges they encounter in the game.

However, for this to work we’re also going to need some help from you, our players. It can be a bit daunting for some developers to reveal themselves and to make sure everyone is comfortable and having fun with you we humbly ask that you respect the following requests:

Not everyone who works at CCP is an EVE veteran. Lots of developers may not have roles at the company that have anything to do with design, content or game balance but still want to play EVE anyway. Others might be industry veterans who are skilled in their fields but are new to CCP and EVE and are learning the game as well. So if one of us leeroys a gate, misses your rep broadcast or asks a question about something basic you think should be common knowledge please don't come down on them hard about it. We ask for your patience while we're getting used to this new approach.

This change will open up more ways for us to enjoy EVE so that we can develop a deeper understanding of the game and strengthen the connection with the players. If you have a known developer in your corp or alliance please don't come at them with balance issues, design ideas or "CCPlease" every time they log in. We already monitor various platforms to gather valuable feedback from the community and we'll continue learning about the issues you face just by interacting with you normally and playing the game together. If a developer doesn't have a "CCP" in front of their name at the time just treat them like you would any other spacefriend. It could have a negative impact on participation if logging in to play EVE began to feel like "work". And sometimes you may need to be our space police as well if you think that a developer is being made uncomfortable by other players within your corp or alliance due to their role as a CCP employee.

3. Leave the tinfoil at home

If you run into an opposing fleet that you know has a CCP employee in it, relax - we're not using dev hacks to get intel on you or buff our resists or using any ~space magic~ stuff like that. It's strictly forbidden for devs to cheat in any way. We have to earn our ISK in the same ways you do, it takes just as long for our skills to train as yours do and if we want to buy a dank SKIN or some PLEX we have to open up our own wallets just like everyone else.

This is also a good time for a reminder that attempting to impersonate CCP employee is a violation of the Terms of Service:

We at CCP are very excited about this new approach and the potential it has for guiding the development of EVE Online in the future. The quotes below are just a small selection of the comments made about this change during our internal discussions at CCP. They weren’t written with a public audience in mind, so you can see how genuine the enthusiasm within CCP for this really is: 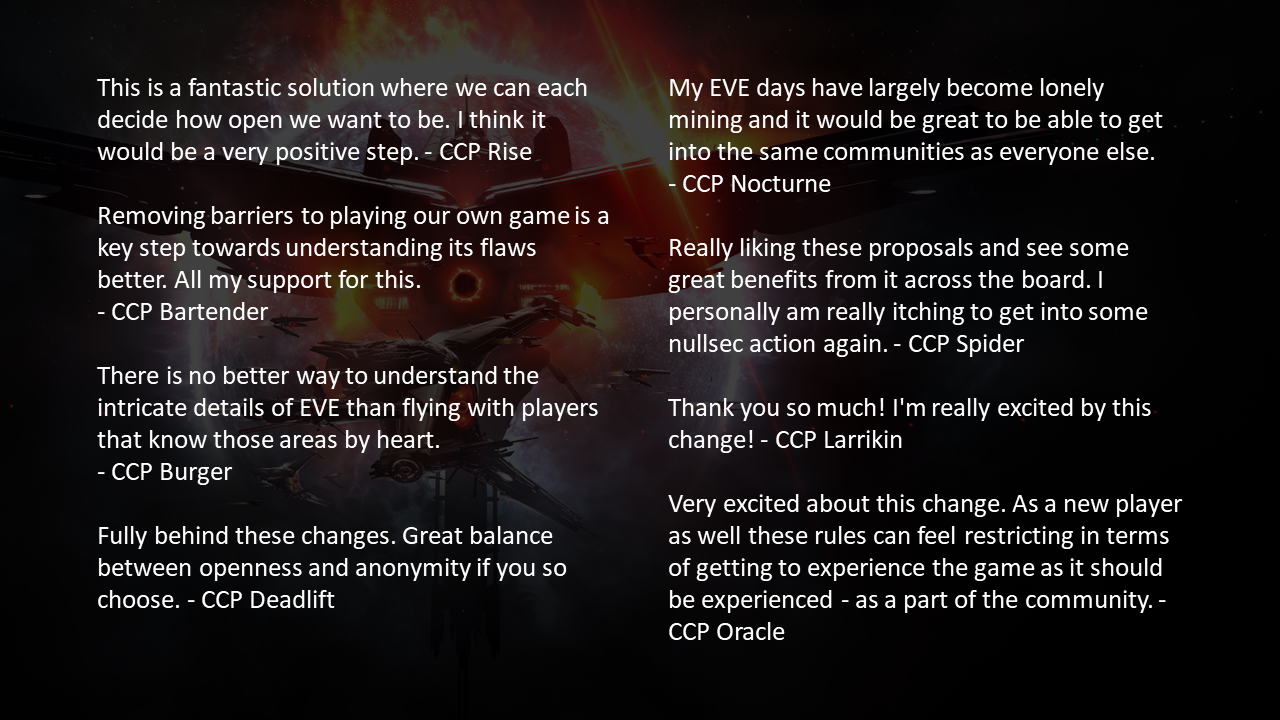 We hope that you are as excited as we are for the possibilities that this will unlock. We’re looking forward to playing EVE with you again, properly.

P.S. Is anyone recruiting?

In the interest of transparency the updated part of the policy which pertains to what has been discussed here follows:

Most of the following should be common sense and can be summed up with:

Player identity as a CCP employee

The identity of an employee's CCP Player Character(s) is anonymous by default. An employee can however choose to publicly reveal their identity as a CCP employee.

Developers who've chosen to publicly reveal their identity must take extra care! You are a representative of CCP and anything you say may be understood as such.

Keep work & play separate and avoid having deep work-related discussion while on your player character. Even with the best of intentions, it's not a good look if certain in-game organizations are perceived as having special insight into upcoming features or bug fixes due to CCP Dev membership.

The full text of the CCP Bible as it's known is available here.