Start your warp drives, it’s time for the Federation Grand Prix once more! Introducing new landmark sights to see, plus daily rewards and multiple circuit routes across New Eden, the fastest Capsuleers in the cluster can compete against each other for glory until 11:00 UTC on 23 March.

As part of the Reign Quadrant, the daily Federation Grand Prix seasonal challenges will task you with getting yourself to the start line in the Luminaire system and then racing to a number of selected landmark locations within a designated time limit to earn rewards.

You’ll get to know parts of New Eden in a way you may never have before and claim challenge rewards such as Luminaire Zenith SKINs and Grand Prix Boosters.

Until 11:00 UTC on 23 March, you can log in to EVE Online daily and get free rewards as part of the Federation Grand Prix event!

Rewards for Alpha pilots include an Expert System that will temporarily grant any pilot the necessary skills and skill levels to fly speedy Interceptors, perfect for the daily challenges! Alphas can also claim Grand Prix Velocity Boosters, Luminaire Zenith SKINs, and 15,000 Skill Points. Omega pilots get all of the Alpha rewards plus more Luminaire Zenith SKINs, an extra 35,000 Skill Points, and an extra Grand Prix Warp Booster for further race day advantages!

Here’s a snapshot of some of the daily rewards you can look forward to during the event: 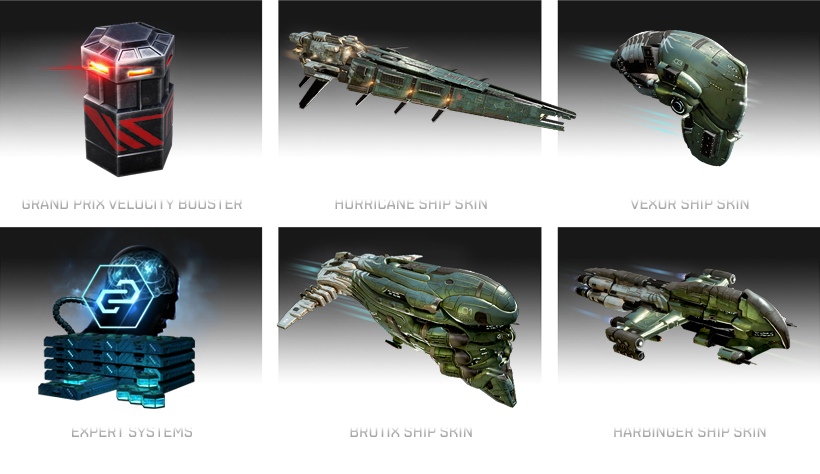 Remember, you must log in on at least 7 days of the event to claim all the rewards, but those days need not be consecutive.

New landmarks added to New Eden include the Statue of Chribba which pays tribute to a much celebrated and respected Capsuleer in the EVE community, the Alliance Tournament Monument that commemorates the majesty of competitive combat on a legendary scale, the Project Discovery Phase Two Monument that celebrates the Capsuleers’ contribution to the discovery of exoplanets, the Doriam II Memorial that stands in memory of a well-loved Amarr emperor, and more!

There will also be a new Abyssal Proving Grounds event going live between 12 and 16 March to coincide with the theme of the Federation Grand Prix. You can engage in 1v1 Interceptor combat with a special 100% ship velocity bonus!

The quickest and craftiest Capsuleers can also write their name into the history books of New Eden as well as getting their hands on some other great prizes! Check out this forum thread to learn more about the Federation Grand Prix Contest which will be running concurrently with the event!

The stunning and popular Federal Police SKINs will be returning to EVE Online’s New Eden Store for the duration of the Federation Grand Prix event! This SKIN is now also available for the Dominix, Dominix Navy Issue, Thanatos, and Vexor Navy Issue, in addition to the hulls it was already available on last year.

Check out the new SKINs available this year: