Beware – Halloween is nearly upon us, and New Eden has been plunged into its spookiest season yet! A new Crimson Harvest event, daily login rewards, a special Proving Ground event, increased PVP loot drops, and special offers are all imminent, so get ready for a fully packed season of frights! EVE’s premiere Blood Raider seasonal event has begun once again, starting today and running until 9 November! This year, Capsuleers will be met in battle by the forces of the Order of St. Tetrimon, an Amarr religious order dedicated to the preservation of the scriptures of the faith. Join the Order in their campaign to drown this sanguine spectacle in laserfire, or for the first time ever take the side of the Blood Raiders, venerating the Harvest and painting New Eden in crimson!

Combat and hacking sites for both sides of the conflict are appearing in Highsec, Lowsec, Nullsec, and Wormhole systems, with the advanced sites spawning in Lowsec systems within the Derelik region, as well as within Blood Raider-controlled systems in Delve. Additionally, communications intercepts have revealed whispers of deeper, more vital sites being established across the cluster, which may only be tracked down through escalations of the advanced combat sites.

Choose which side to support in the Agency section for the event, with unique sets of challenges and rewards for either path. Additionally, you can look forward to special daily login rewards packed with Skill Points, special Boosters, and new SKINs! 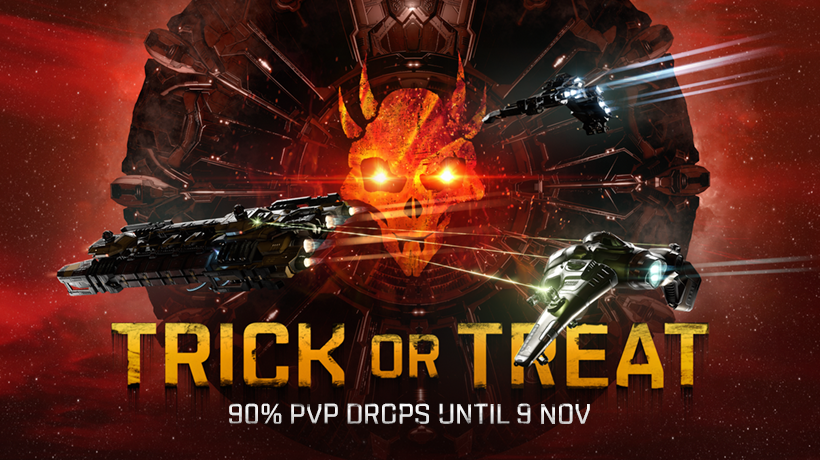 During the event, PVP kills can be expected to drop loot at an increased rate, averaging at 90%! Carve out your harvest from the wrecks of your targets, which will be marked with a special pumpkin icon , but beware in your prowl for treats – you may very well become someone else’s!

Rise from the dead at your full potential, with a discount on every Omega subscription! The one, three, six, and twelve-month options are all available now at 15% off, but only until 3 November – so save big on immortality while you can! MONSTERS FROM THE MURK

The Malagrin Marshlight SKIN series will be returning to the NES for the Harvest, with added availability on 8 additional hulls! Headhunter SKINs will also be returning, giving pilots a fantastic selection of terrifying visages to display as you trick-or-treat across the cluster. Check out the SKINs on offer, and prepare for a season of frights! Keep an eye out for some extra treats: each 240, 500, 2860, and 7430 PLEX package purchased during the event will come with its own free Deathglow Hunters SKIN! A new 4-player free-for-all Destroyer Proving Ground will be running Halloween weekend, from 29 October to 2 November, in celebration of the Crimson Harvest, with an arena effect providing an increase to Stasis Webifier range, Nosferatu and Energy Neutralizer strength, and Laser turret damage! Only the Coercer, Dragoon, Cormorant, Corax, Catalyst, Algos, Thrasher, and Talwar-class Destroyers may enter, with modules limited to meta level 5 and pirate implants restricted. Demonstrate your fervor and quench your thirst for blood in this special event!

The Harvest is upon us, so fly safe, and see you in space!