It’s been over six weeks now since 2022 began, and it’s already shaping up to be an exciting year for EVE. Fanfest will happen on EVE’s 19th birthday, and to get you into the Fanfest spirit there are a slew of important updates coming from now until the Party at the Top of the World in Reykjavík 6-8 May that will be covered in this blog.

Before that, let’s just take a quick look back at 2022 in EVE to date. The year started on what many would consider a surprising note with the EVE Online x Doctor Who crossover event 'The Interstellar Convergence'. After a tumultuous start, it was great to see the buzz in the community as Capsuleers charted their path to Gallifrey to experience an event like no other.

This was further established with a huge uplift in hacking activity which skyrocketed to levels beyond what EVE has seen in several years. Not to mention the impact this event had in bringing crowds of fresh players to New Eden! It was a blast to see all the streams, Whovians talking about EVE, the dapper outfits, Doctor Who memes, and your firsthand experiences of battling foreign forces in New Eden until the bridge between the two universes closed on 1 February. The event allowed us to view EVE Online through new glasses and demonstrate the amazing potential for future EVE events.

THE ROAD TO FANFEST

In the coming months, EVE will be filled with many updates, including balance changes, new player focused features, and events leading up to Fanfest 2022, when CCP will be welcoming you all to Reykjavik for the first time in 4(!) years. 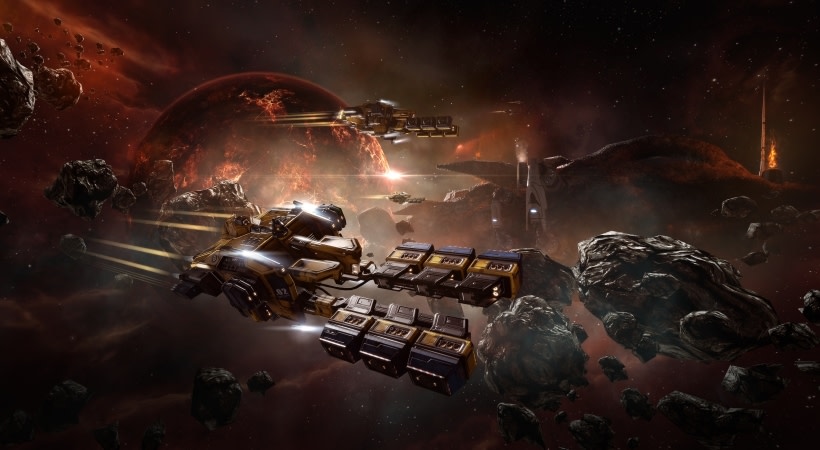 A significant update to the first hour of gameplay featuring a mysterious mining adventure is being added to the New Player Experience. This portion of EVE’s introductory experience will send you on a mining expedition fraught with intrigue and hints at the unfolding AIR storyline. Alongside Aura and the newly-introduced Elias Peltonnen, expect to learn the basics of mining and EVE’s economy in an engaging story-driven way.

In addition to the mining adventure, a feature that will help new players navigate the vast options EVE has to offer and find their true calling in New Eden is being worked on. This feature will be released later this winter. 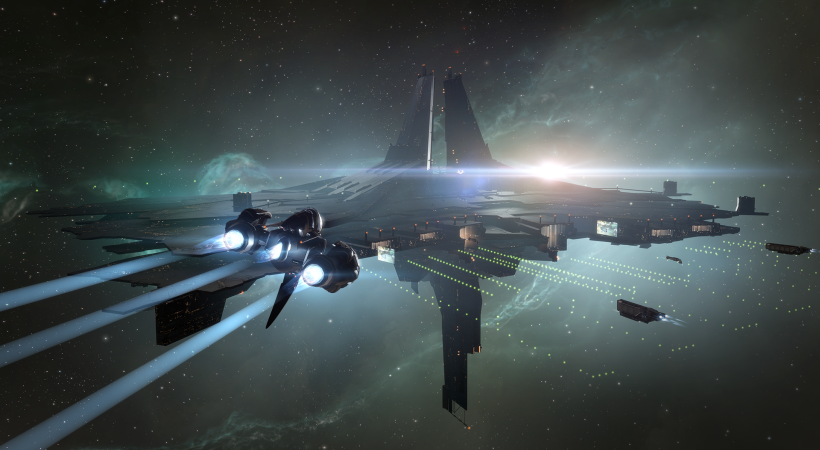 We've seen some renewed action surrounding player owned customs offices (POCOs) and there are a few small upcoming quality of life changes when it comes to POCO warfare. From greatly reducing the gantry shield EHP (from 10,000,000 to 500,000) to increasing the onlining delay, our goals are to ensure fair and fun conflict for attackers and defenders alike, while rewarding players who manage to hold the field in High Security space.

There is a big graphical change coming in March that will improve reflections, as a follow-up to last year’s ‘Bring out EVE’s colors’

Previously, the reflections in EVE were based entirely on the background of the scene. This included the nebula and distant celestial objects, but not the immediate environment. Coming this March, reflections will start including structures, effects, and other significant objects in the space around you, increasing immersion and adding a whole lot of awesome.

AS THE SEASONS TURN 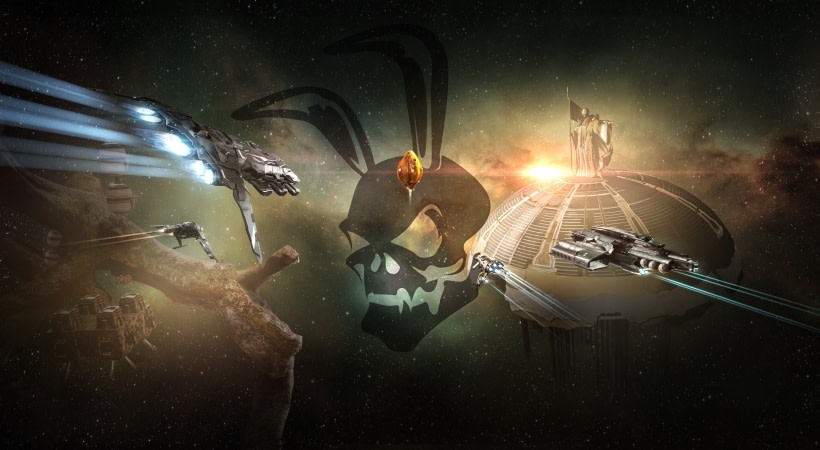 The Guardian’s Gala is back with some new elements! This year the celebrations hit new heights, which you can check out in the latest Scope where Alton Haveri reports on the theft of some compression prototypes by Serpentis and Angel Cartel pirates.

We will also see the return of Friendship Week which made its debut last year and The Hunt in April, all of which will lead up to Capsuleer Day celebrations during Fanfest in May! 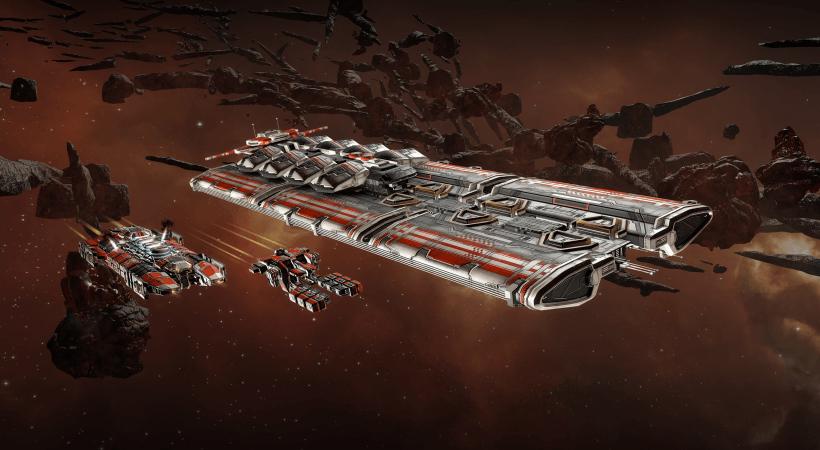 About that stolen compression technology; at the end of last year we announced a significant update to mining and industry in EVE Online that included, among other things, new methods of resource compression. When the full feature set was put on the Singularity test server, we received a ton of valuable and important feedback on the proposed changes, and took it back to the drawing board.

Industry is the backbone of EVE’s economy, so it’s important to understand how industrialists use these features today. Currently stations and structures offer lossless compression for asteroid ore and ice. We want that experience to be just as good and offer the same thing to in-space compression.

When we say that they will be able to offer the same service, we mean exactly that. While in space and in the same fleet as an industrial command ship with its industrial core active, you will be able to instantly compress resources of any amount from your hold – and compressing in stations & citadels remains unchanged.

The updates to compression are now ready to be shared with you again for feedback and will be available for testing on Singularity on 17 February. There are many details to dig into, which is why a detailed forum post will go out alongside the update. As always, your feedback is important to us and a crucial element in ensuring these changes have a positive impact in New Eden.

Until then, here is an overview of what you can expect from the release:

As you can see, as long as you are in range of a ship with an active compression module, in-space resource compression is as easy as the click of a button and will remain lossless. We look forward to sharing more details on these compression changes this week on our forums.

Alongside these updates to compression, there are several other balance changes incoming that we hope you will be excited about 😉 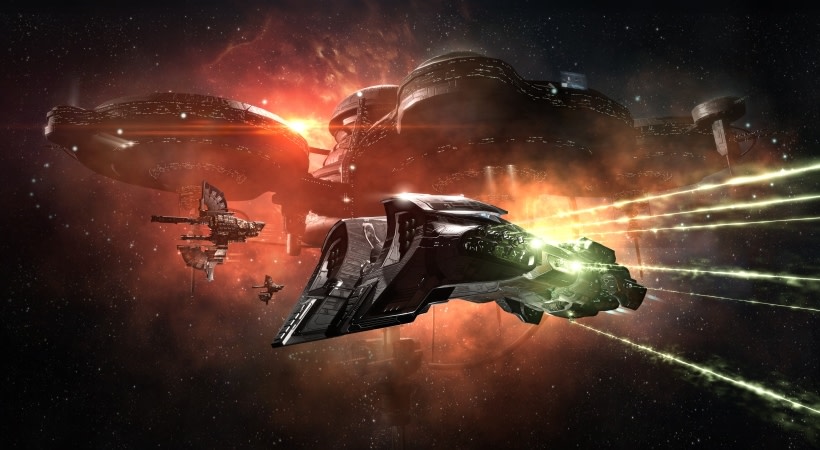 We love battleships, and we know you love them too. They are some of the most versatile ships in EVE and their legacy is packed with impossible feats and epic battles. While battleships are fielded, they are currently lacking in both mobility and survivability to justify using them more. We want to change that.

A new role bonus has been stitched onto all battleships which increases the effectiveness of armor plates by 50%, and bumps shield extenders by 100%. Large micro jump drive fitting will also be reduced substantially. This applies to ALL battleship variations, including faction battleships, marauders, and black ops. We can’t wait to see the new battles you wage and stories you create using these ships. 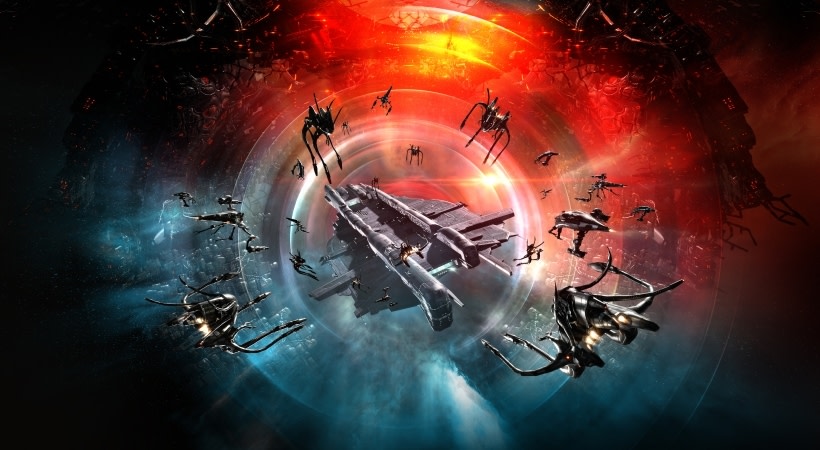 The Concord Rogue Analysis Beacon has been successful as a lucrative option for capital owners and in-turn has renewed some big game hunting. However, we feel there’s room to increase rewards further for CRABbing, so the LP cost of the beacon blueprint will be decreased and the amount of Rogue Drone infestation data per run will increase. 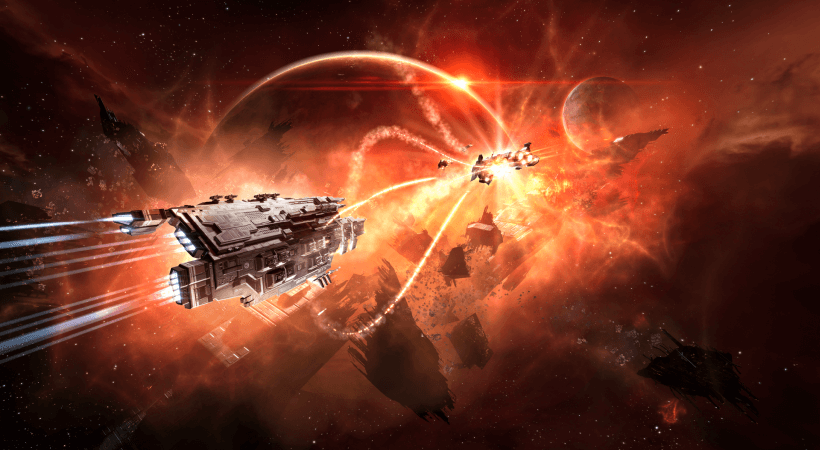 The Surgical Strike release introduced changes in resistance bonuses granted by all modules. This was meant to reduce the power of capitals during the era of super umbrellas and increase the chance of scoring kills even on the losing side of a fight. While it’s good that indestructible force auxiliaries aren’t commonplace today, it’s also noted that some styles of gameplay - such as wormholes and Lowsec - lost parts of the combat meta they loved. In order to get the best of both worlds, there will be an update to the Surgical Strike changes to bring the updates closer to how things were before. To that end, resistance modules have had half the resistances they lost returned.

This also opens to door to more specialized fits and doctrines, while also enabling more ship diversity for all areas of combat. 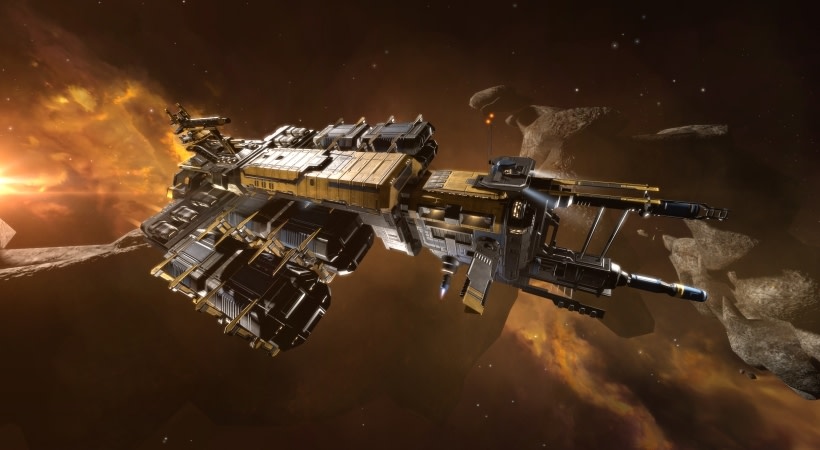 Following on from the March update, we will introduce a new industrial jump portal generator module, enabling Rorqual pilots to conduit jump mining ships near them. This module will work in a similar way to the black ops jump portal generator, allowing swift deployment to moon mining operations and more.

As mentioned in the Winter Status Update, we want faction ships, dreads and other capitals to be out in space, wreaking havoc on the battlefield - via well-orchestrated 'dreadbombs' or other means. To that extent, blueprint requirements will be updated prior to Fanfest.

STRUCTURES UPDATES ON THE WAY 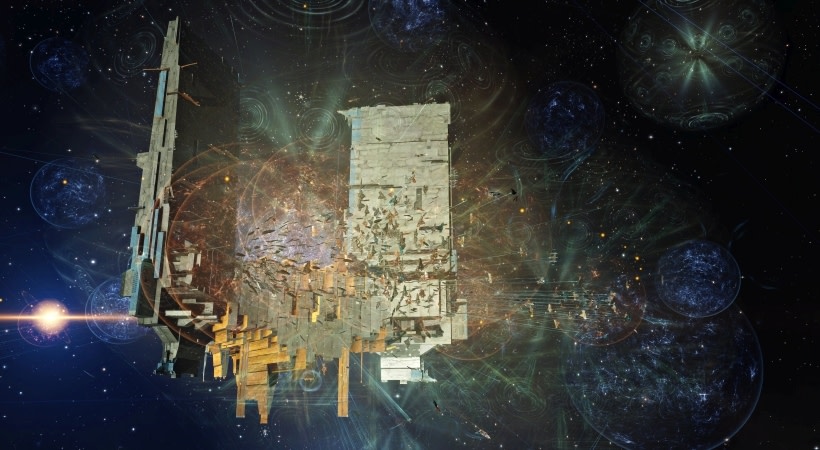 The fabric of space changed significantly when the first structures were released in 2016. At the time, the complexity of this change to the meta was almost impossible to grasp. Since their release we’ve learned a lot and made numerous updates. This coming April we will see the next set of changes to them, when we will dive into various core mechanics and structure modules. The changes will be highlighted as we get closer to that date. 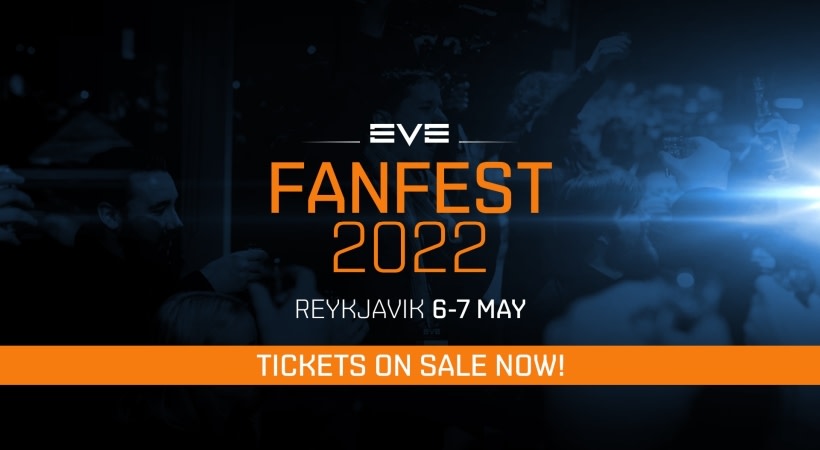 There are a lot of things to look forward to from now until Fanfest, but you might be wondering what’s up with Quadrants? We’re glad you asked!

This update comes without a Quadrant theme to kick off the year. That is because it has been decided that after 2 full years, it’s time to evolve from Quadrants into something new, taking the good and combining it with learnings from previous efforts (such as the Invasion) as well as former expansions.

It’s been a great journey, and we’ve learned a lot along the way. However, as we look ahead and into the future, there are some bigger topics we want to tackle that will take more time than Quadrants allowed, making this the perfect time to take those learnings and enter a new era.

In this new framework, which will consist of a grander overarching narrative over a longer time period than the previous three month cycle, you can still expect a full cadence of events, balance changes, gameplay updates, trailers, etc. The pace of releases and fresh content in EVE will be maintained, but with the added flexibility to tackle larger projects as well. With it being part of an overarching narrative that evolves the story in New Eden, a happy medium between expansions, quadrants, and events such as the Triglavian Invasion will be achieved. We will dive deeper into this at Fanfest 6-7 May, and how it will impact your experience as an EVE player. 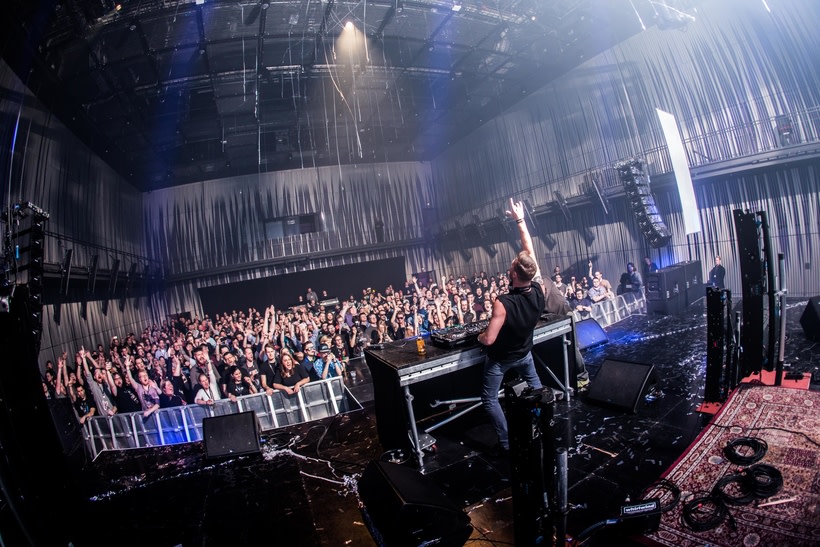 On that note, this Fanfest is gearing up to be one for the history books. Check out the official Fanfest website for more information or reach out to us if you have any questions! After a four-year hiatus, the whole EVE Team is thrilled to be able to join EVE players in taking on Reykjavík over a whole weekend.

In the meantime, we’re going to continue to release updates, host events, etc. to ensure you can continue to enjoy playing EVE with a packed schedule leading up to Fanfest.

See you in May, Capsuleers. Until then, fly safe!